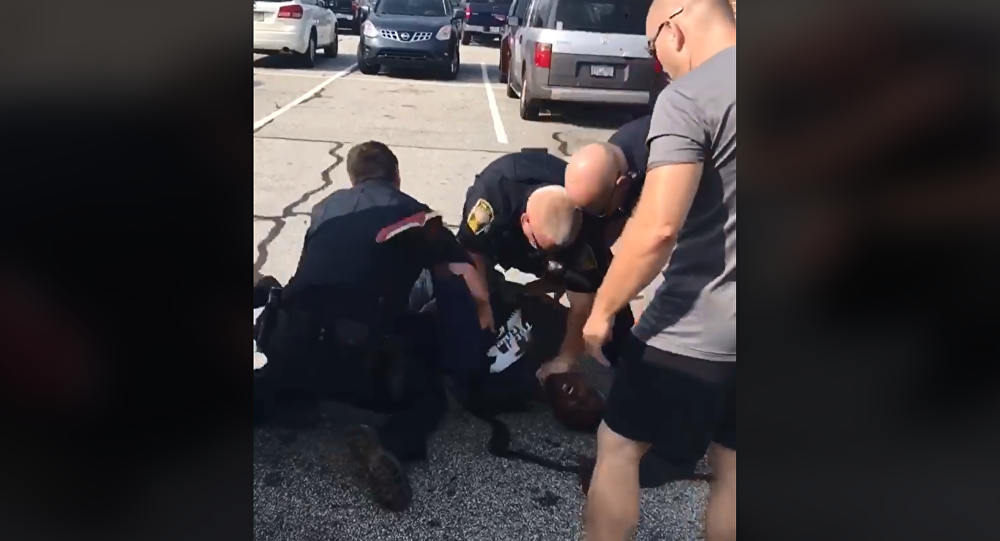 The video, uploaded by Marrow on Thursday but taken on December 2, 2017, begins with Marrow handcuffed and standing, flanked by officers on either side. They are walking him to a vehicle when one utters the threat, "You're going to get tased, do you understand me?"

"I'm not even doing nothing. I'm not even fighting back," Marrow repeats several times as the officers push him against a truck and then slam him to the ground. Almost immediately after hitting the ground, Marrow begins weeping.

"It's unbelievable," the man recording the video can be heard saying.

​​Officers then try to contort Marrow's body in an effort to restrain him. One officer grips Marrow's neck. "I can't breathe!" Marrow screams before closing his eyes and falling limp.

One officer then slaps him on the chest, asking "Are you ok?"

"I can't breathe" has been a rallying cry of the Black Lives Matter movement since it was uttered by Eric Garner in Staten Island moments before he was killed by police in July 2014.

Marrow feared he was going to meet a similar fate. "I thought I was going to die. I was sure I was passing out or dying," Marrow said in Thursday's Facebook post. "I was fully cooperating with the officers with ZERO resistance."

According to Marrow, he was arrested for "having a gun that turned out to be my cell phone." If Marrow's word is true, the incident is yet another case in which police have been accused of excessive force against a black man after mistaking a cell phone for a gun. Stephon Clark, an unarmed African-American man, was killed in Sacramento, California, on March 18 after police did just that. Daniel Covarrubias, an unarmed Native American, was killed for the same reason in 2015 in Lakewood, Washington.

Marrow says that police knocked his teeth out and left him with a strained soldier and concussion.

He also says that police threw him into isolation and labelled him a gang member because of his tattoos, as well as apparently accusing him of resisting arrest for "being out of control," spitting on officers and headbutting them, which is an assault charge. "But once they found out I was a former #NFLplayer & there was a video of the incident did they then try to drop my charges," Marrow wrote on Facebook.

The Henry County Police Department has not yet issued a statement on the incident.

Marrow played college football for six years at the University of Toledo, and signed with NFL teams in Tampa Bay, Florida, and Houston, Texas.

Protests Shake US Despite Government Efforts to Stem Police Brutality