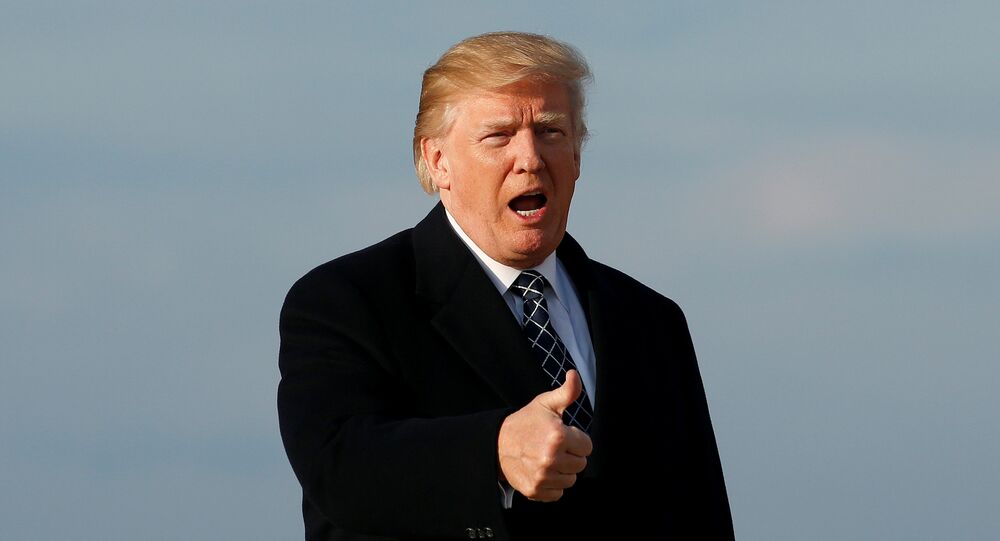 Donald Trump has repeatedly been accused of inappropriate advances, touching, kissing and groping over the past several decades – allegations he has denied on numerous occasions.

Sputnik has gathered some of the women who have gone public about Trump’s alleged sexual misconduct or affairs since his decision to run for president.

Daniels reportedly took a polygraph test in 2011 as part of a deal to sell her story to Bauer Publishing for $15,000, however, the publisher didn’t release it, as Cohen had allegedly threatened with a lawsuit.

WSJ appears to have the contents of the polygraph test Stormy Daniels took in 2011. "CONCLUSION: In the opinion of this examiner Ms. Clifford is truthful about having unprotected vaginal intercourse with Donald Trump in July 2006." https://t.co/uigZoLIteR pic.twitter.com/iFDdJM4zti

The ex-adult film star made an appearance on the program 60 Minutes in an interview to reveal more details about the purported affair and claimed that she was threatened by an unidentified man to keep quiet. She has filed a lawsuit trying to break the non-disclosure agreement.
Following the interview, Cohen demanded that Daniels “cease and desist.”

The former Playboy model claimed that she had an affair with Trump in 2006 which started three months after the birth of his and his third wife Melania’s son Barron. In the recent interview with CNN, she expressed guilt over the alleged 10-month relationship, saying that the relationship was consensual and loving. McDougal also added that she thought she was the only mistress and did not know that he “was intimate with other ladies.”

"After we had been intimate, he tried to pay me, and I actually didn't know how to take that," she said of their first alleged sexual encounter.

Having gone public, she neglected legal risks related to a $150,000 hush agreement she had signed before the 2016 presidential election.

Trump’s former reality show The Apprentice contestant has filed a defamation lawsuit against the president, claiming she was sexually harassed by him. She alleged that he kissed her twice on the lips: the first incident took place during a lunch meeting in his New York office in 2007, and later in Beverly Hills, where he kissed her aggressively and touched her breasts.

Jill Harth was Donald Trump’s business partner in the beauty contest industry; when women from various industries started speaking publicly about their experience of being sexually harassed or assaulted last autumn, Harth opened up too.

In an interview with The Guardian, she said that in January 1993, when she was visiting his mansion Mar-a-Lago, Trump pulled her aside into one of his children’s bedrooms, grabbed her breasts and crotch.

“He pushed me up against the wall, and had his hands all over me and tried to get up my dress again,” Harth recalled, “and I had to physically say: ‘What are you doing? Stop it.’”

In a 1997 complaint, details of which emerged after Trump announced his candidacy for president, Harth accused him of “attempted rape.”

Sad you had to go through it. My pain is everyday with bastard Trump as President. No one gets it unless it happens to them. NO one!

A People magazine reporter, Stoynoff claimed that Trump grabbed her and “forced his tongue down her throat” at Mar-a-Lago; although he denied the allegations, saying she was not attractive enough for him to have hit on her.

“Take a look. Look at her. Look at her words. And you tell me what you think. I don’t think so,” he said.

Trump has denied all the allegations, saying he didn’t know these women.

Nothing ever happened with any of these women. Totally made up nonsense to steal the election. Nobody has more respect for women than me!