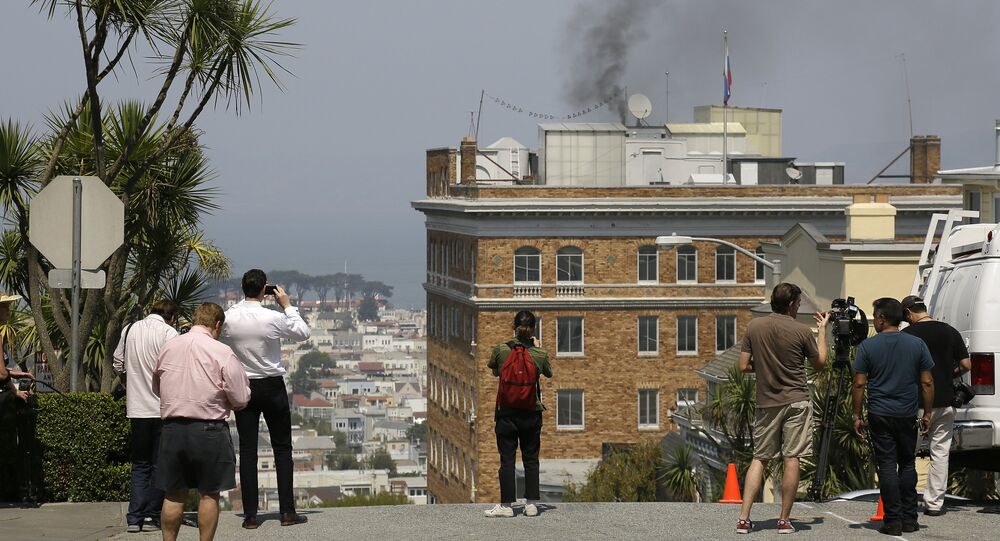 'Sacrosanct' Sentinel: US Keeps Russian Diplomatic Compounds Closed for Everyone

WASHINGTON (Sputnik) - The Russian Embassy on Wednesday bashed the United States for "unmotivated" and "hostile" actions after its ambassador was denied access to Russian diplomatic properties in the country.

"Promises made by the Assistant Secretary for Diplomatic Security Michael Evanoff that our properties are fine cannot be trusted," it said in a statement. "Even in the better year the American side followed the trust but verify principle… Now it is time to verify first and trust second."

© Sputnik / Alexey Agarishev
Russia to Continue to Seek Return of Diplomatic Property in US - Kremlin
The Russian Embassy has several times requested access to the confiscated properties for a security check but was denied barred from entering.

"Such American stand is unacceptable. Our grave concern about the state of the Russian property remains. The fact that the Russian Ambassador is not allowed to enter the buildings which belong to the Russian Federation are unmotivated. These hostile actions of the US have neither logic, nor reason," it said.

Earlier on in the day, US Assistant Secretary for Diplomatic Security Michael Evanoff told Sputnik that local law enforcement was ensuring Russia’s closed diplomatic properties in the United States remain untouched and secure. "Nobody is allowed to go in. So, they keep it [diplomatic properties] sacrosanct," Evanoff said. Local law enforcement, he added, will ensure all facilities that are not being used right now "stay secure."

© REUTERS / Maxim Shemetov
Tensions Remain Even as US Returns Russian Flags Taken From Diplomatic Property
In early September, Russian diplomats lost access to several diplomatic properties as the US authorities closed down the Russian Consulate General in San Francisco and trade missions in New York City and Washington, DC. US officials said the move came in response to Moscow's decision in late July to reduce the number of US diplomatic staff in Russia to 455 people, the same number of diplomatic personnel Russia has in the United States.

After Russian diplomatic staff left the compounds, US security agents entered the premises to conduct searches. Moscow said that the actions of the United States constituted a violation of international law, including the Vienna Convention on Diplomatic and Consular Relations.

Russia Continues Work on Lawsuit Against US Over Diplomatic Property