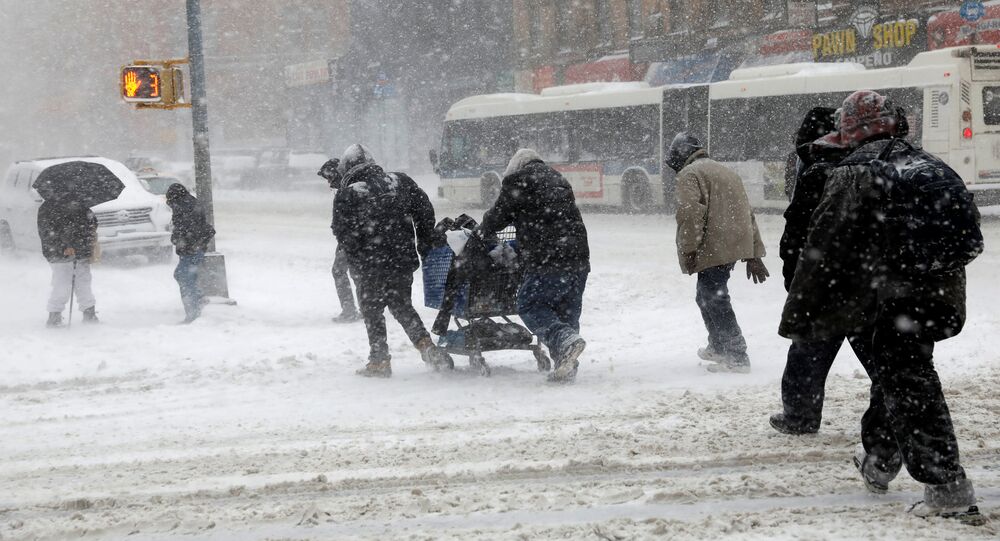 WASHINGTON (Sputnik) - The situation with the flight delays of the Russian airlines at the airports of New York and Washington is being normalized, the Russian passengers are being provided with the necessary assistance, Russian Ambassador to the United States Anatoly Antonov said on Saturday.

The ambassador noted that the first flight was scheduled for 14.30 local time [19:30 GMT] and the second one for 15:30 [20:30 GMT]. He stressed that the embassy maintained close contacts with the State Department on the issue.

The baggage claim area @JFKairport — they're just leaving ppls bags anywhere… You don't know what flight they're from and not one representative from @flysaa in sight. Ppl have been stranded in the airport for days with no vouchers for lodging, etc. pic.twitter.com/95VUy3jIGM

© REUTERS / Andrew Kelly
New York Governor Declares State of Emergency Due to Powerful Snowstorm
"The situation with the flight delays from New York, diverted for an emergency landing to Washington, is being normalized. The passengers check in, the aircraft is being prepared for the flight," Antonov said in a statement, published on the Embassy's Facebook page, without specifying the airline carrier.

Meanwhile, Russian Embassy in the United States thanked Sunday the US State Department for its assistance in solving the problem of the delayed flights of Russia's Aeroflot airline from Washington.

"To speed up the departure of @Aeroflot flights delayed due to #blizzard2018 #BombCyclone, the Embassy requested the assistance of US @StateDept. We thank our colleagues for their helpfulness and prompt assistance," the Russian Embassy wrote in a tweet.

On Saturday, the Aeroflot airline announced that its ground service company Swissport had not confirmed the service of the airline's flights from Washington's airport due to the adverse weather conditions and transport collapse at the airports of New York and Washington. As a result several flights have been delayed.

And so it begins. Flights inbound to @JFKairport are either holding or diverting due to blizzard conditions. pic.twitter.com/aif8G5m9MN

Snow Maidens From Around the World

How to Clean Snow While Drifting (VIDEO)