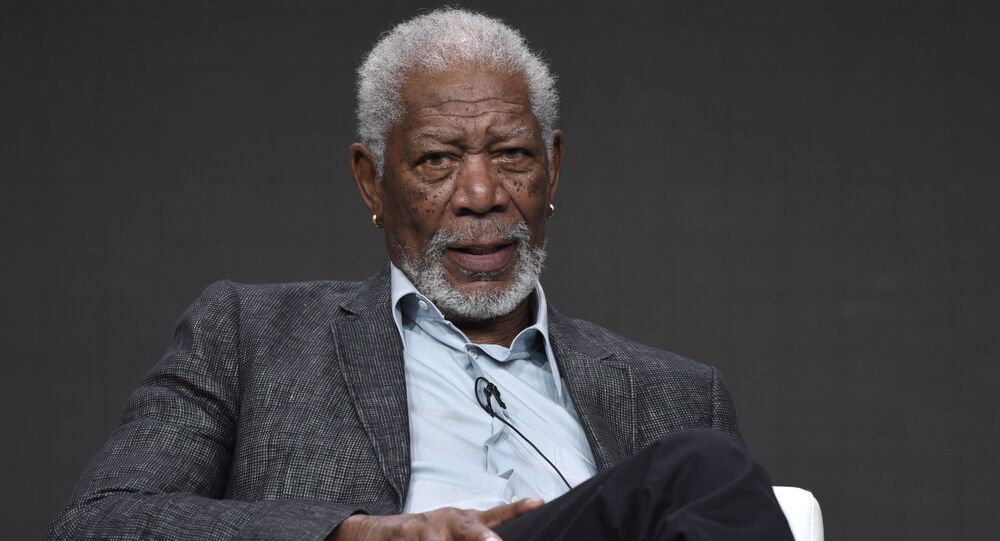 Social media is awash with outrage after Hollywood megastar Morgan Freeman appeared in a propaganda video issued by a newly-established anti-Russian non-profit group, in which he declares Washington is at war with Moscow.

However, initial reactions to the clip on social media suggest the move might've been a titanic misfire, as even supporters of the #TheRussiansDidIt hypothesis criticizing the group, and slamming the video's incendiary tone.

I never imagined that actor Morgan Freeman could be that much of a simpleton to fall for this idiotic propaganda. I have zero respect 4 him pic.twitter.com/xEHk3gjUAx

In the two-minute-long video, the Shawshank Redemption star issues a dire warning, "We have been attacked. We are at war."

"My fellow Americans, during this past election, we came under attack by the Russian government. I've called on Congress and our intelligence community to use every resource available to conduct a thorough investigation to determine exactly how this happened. We need our president to speak directly to us and tell us the truth," Freeman says.

Yes, it is indeed a movie script, Mr Freeman, and you are an actor playing a part in spreading propaganda. This should get you an Oscar.

Nothing about our public investigation process a little Hollywood and journalistic outrage can't fix.

The Committee to Investigate Russia aims to help US citizens "understand and recognize the scope and scale of Russia's continuing attacks on our democracy" — a lofty ambition, but given the weight of the group's advisory board, one it will surely have little trouble achieving.

From the men who brought you Spinal Tap & the Iraq War comes a gripping tale of a search for meaning in a post-election dystopian hellscape. pic.twitter.com/xhT0lOSUOZ

The five-strong board is led by Rob Reiner, director of "This Is Spinal Tap" and "When Harry Met Sally"; James Clapper, former Director of National Intelligence, who committed perjury in 2013 when he told a Senate Select Committee on Intelligence the NSA did not "wittingly" collect data on US citizens; Max Boot, a neoconservative blogger; Norman Ornstein, an obscure political scientist with no discernible history of research into Russia; Charles Sykes, a right-wing radio talk show host.

The Rob Reiner and Morgan Freeman (?!) backed @InvestigateRU warns of the danger of Steven Seagal in Rusian diplomacy. pic.twitter.com/lkRJGCZMCK

To promote the launch, board members appeared on numerous mainstream US news channels — Reiner, a consistent Trump critic who has called for "all out war" against the president, told CNN he was moved to found the group as he felt Americans didn't understand the "gravity of what the Russians were able to do."

"They're trying to undermine our democracy. And for some reason we are not understanding the gravity of this. And I think a big part of that is because the president of the United States is not saying, in the Oval Office, 'my fellow Americans, we've been attacked.' So I started reaching out to people who are patriots," the director said.

Clapper likewise has a record of making controversial statements about Trump and Russia alike. He has previously suggested the president is secretly working for the Kremlin, and claimed Russians are "genetically" predisposed to manipulate and infiltrate.

Boot, an avowed Republican, has also been consistently condemnatory of Trump, and caused consternation in some conservative circles by announcing "real" Republicans should vote for Hillary Clinton in the Presidential election.

In the meantime, despite suggestions of Russian interference echoing since before the November 2016 presidential election, no evidence of Kremlin-backed covert interventions have been publicly offered, despite the House and Senate Intelligence committees launching investigations into the matter.

Has Russian 'Propaganda' Been Exposed by New US Website or Is It Just Hot Air?

‘Doing Nothing is Not an Option:’ Congress Demands Anti-Russian Propaganda Plan