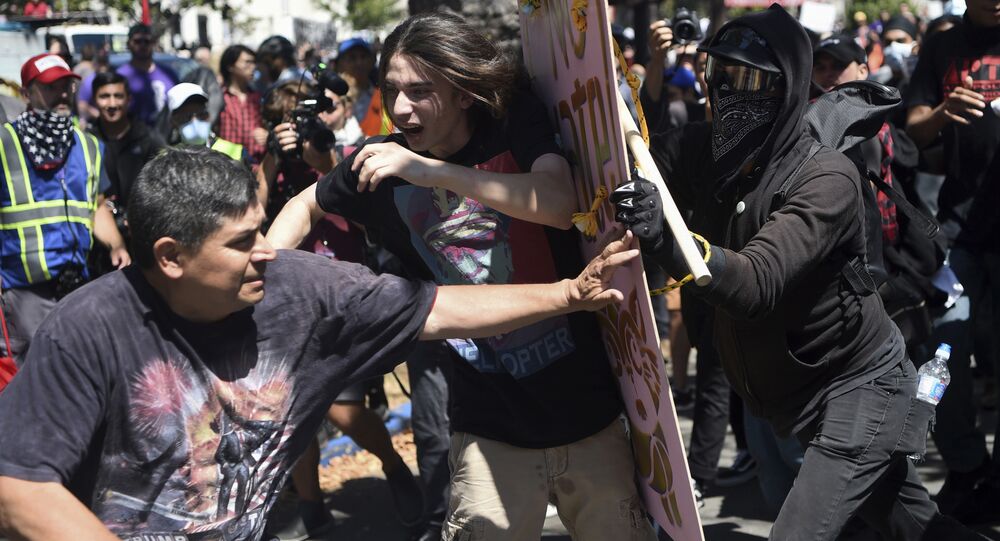 Videos appeared on the web showing a peaceful protest in Berkeley that was attacked by people wearing black clothing and masks.

People gathered in Berkeley, California, at an anti-hate demonstration. The California demonstrations took place only two weeks after a far-right rally in Charlottesville, Virginia, ended in tragedy, as a car slammed into a crowd of counter-protesters, killing one woman.

Shortly after beginning, the crowd was suddenly attacked by black-clad people (claimed by eyewitnesses as anarchists and antifa) near the Martin Luther King Jr. Civic Center Park.

Clip is from live chopper feed by @kcranews in #Berkeley. No cops seen, this is #Antifa. https://t.co/vQHUculNTX pic.twitter.com/AJvowKzbev

What say you, @DonLemon @SenJohnMcCain @maddow @nancypelosi @DNC
Are you proud of what you've created from #PhantomNazis? #Hannity #Berkley https://t.co/G2PwNvkgVX

Antifa peacefully beating down a Trump supporter! This is The ALTLeft! @realDonaldTrump @seanhannity #Berkeley pic.twitter.com/FEIq3QINAL

Where are the police? A masked terrorist army has invaded #Berkeley pic.twitter.com/OIdVSVRmRE

Chief Andrew Greenwood of @berkeleypolice just said they need to provide space for ANTIFA. This is an approval of their violence. #Berkeley pic.twitter.com/qvAVHjgBJe

​Later it was reported, that California police detained 13 people, as a group of anarchists chased away right-wing demonstrators and attacked reporters near the Martin Luther King Jr. Civic Center Park, according to local media.

The recent violence has sparked outrage among Twitter users.

I'm still shocked @berkeleypolice escorted us out of the park & placed us in danger. You're a disgrace Chief Andrew Greenwood. #Berkeley

Democrats are now calling ANY conservative rally a Nazi rally and then they unleash these violent scum ANTIFA https://t.co/uE7aJGFFDo

I am denouncing Antifa. We don't want you on the left. We are for peace, you are not. What happened in Berkeley CA was shameful.