Up until Rohrabacher's alien probe, the hearing was going smoothly — if somewhat dully. Questions generally revolved around relatively mundane, technical considerations — what fuel would be used, the missions' commercial potential, etc.

However, the Congressman's intervention sent a Mexican wave of gasps rippling round the room.

Once the assembled NASA representatives had suitably regained their composure, Kenneth Farley, project scientist on the Mars 2020 rover mission and geochemistry Professor at the California Institute of Technology, took the microphone. He responded soberly that Mars was different billions of years ago, not thousands — and there was no evidence he was aware of to suggest the planet hosted any form of life at that point, merely lakes and rivers, and perhaps a northern ocean.

Yeah! #Mars2020 is under construction in the same @NASAJPL clean room where I was built and tested. Got Qs about the mission? #StateOfNASA pic.twitter.com/hCE729aPHQ

​Nonetheless, Rohrabacher was unfazed by Professor Farley's answer, and probed deeper — asking the presumably bemused project scientist whether he would rule out the prospect entirely.

"I would say that is extremely unlikely," he responded.

The belief aliens may call or have called Mars home has a longstanding history.

In 1906, US astronomer Percival Lowell claimed to have spotted canals on Mars, which he hypothesized had been built to bring water from the planet's polar ice caps down to its mid-latitudes.

In 1976, photos by NASA's Viking 1 Mars orbiter famously showed a landform bearing a striking resemblance to a human face. Clearer imagery taken by subsequent missions revealed the "Face on Mars" to be an mundane rock formation, but some alien fans still believe the blotch is still evidence of an ancient civilization on the red planet.

Ever since the 1960s, a series of spacecraft have explored Mars, consistently failing to detect any evidence intelligent organisms ever arose there — although that doesn't mean the celestial body has never supported life of any kind. 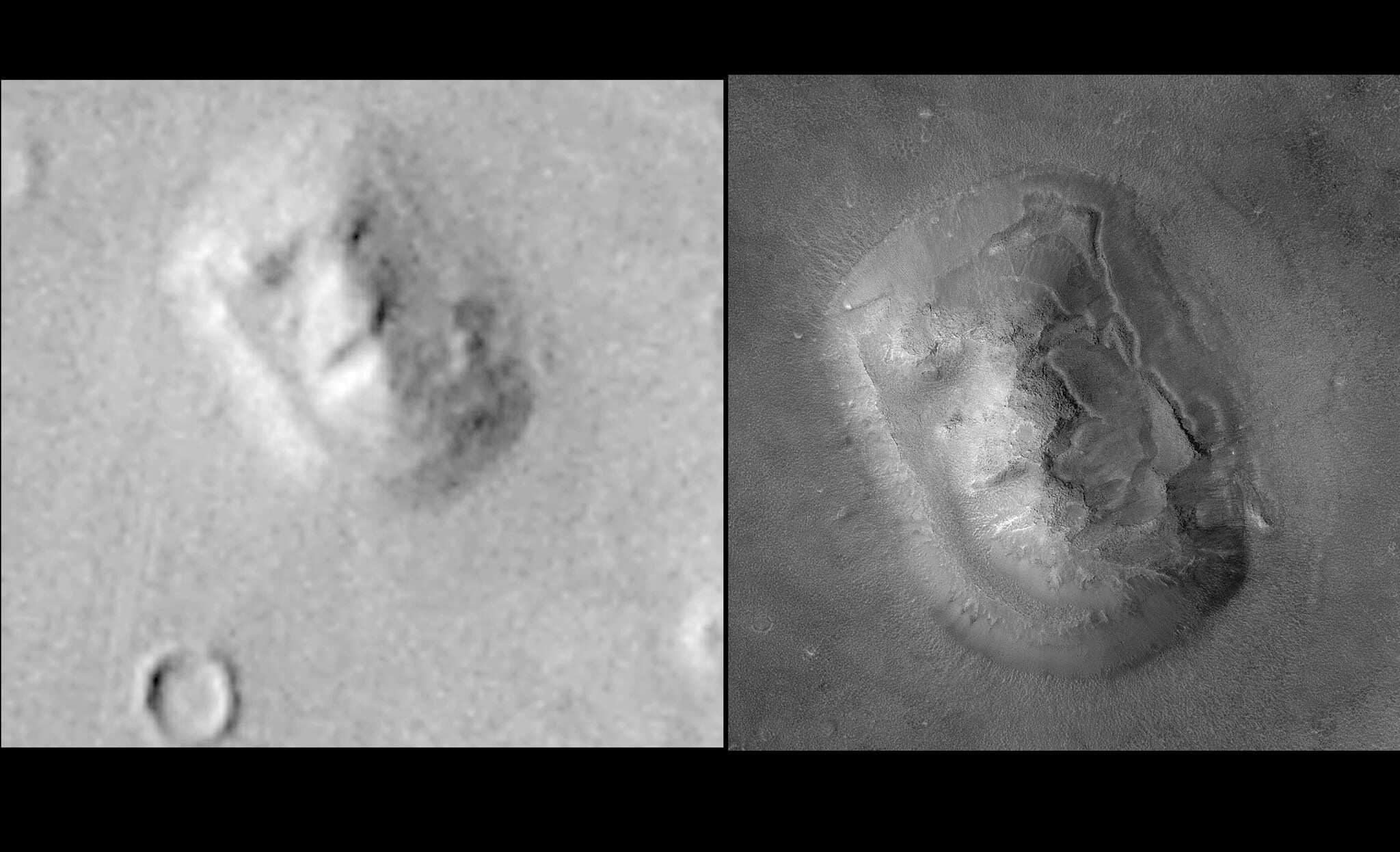 © AFP 2019 / NASA
This composite image released by NASA 24 May, 2001 shows a new high resolution image of the "Face on Mars" (R) alongside an early Viking Spacecraft image (L).

As Prof. Farley noted, there are suggestions at least some parts of the Red Planet were potentially habitable for extended periods in the distant past.

Microbial life may once have thrived there, and/or survive in the 21st century buried deep in the soil, protected from the high radiation fluxes on the surface.

The 2020 Mars rover will search for evidence of past microbial life when it arrives February 2021 — the six-wheeled robot will also collect and store samples for future return to Earth.

"Truly definitive discovery of microbial biosignatures by instruments on board the rover is unlikely, and can best be undertaken by using the full arsenal of terrestrial laboratories," Prof. Farley testified at the hearing.

Elsewhere in the hearing, Pappalardo revealed a laughter-eliciting gobbet about the Europa Clipper mission.

He said the project evokes the famous sci-fi film 2001: A Space Odyssey — the team is using a giant monolith as its mascot, and even takes the totem to its meetings.

No Life On Mars? Study Shows Red Planet Is Deadlier Than Previously Thought