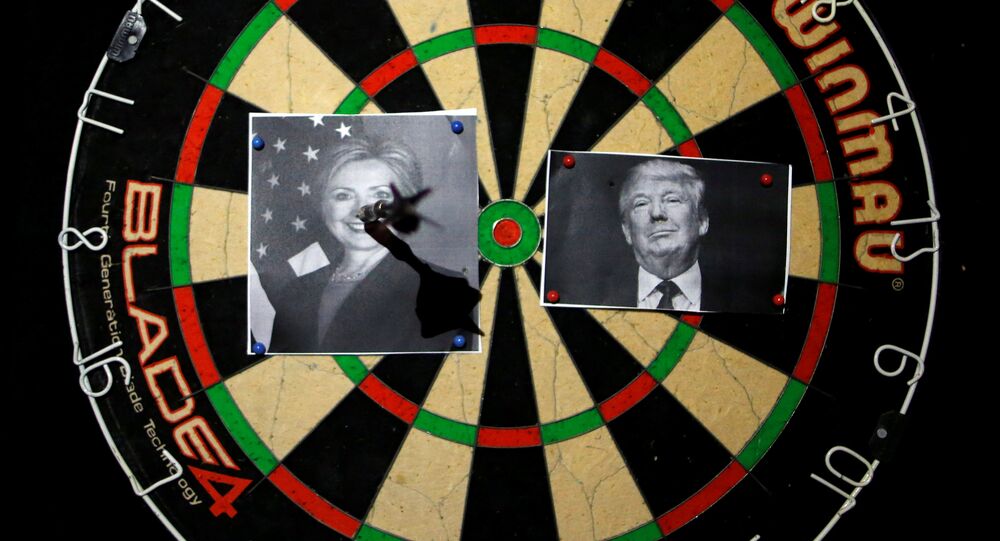 Full of Contradictions: Why US Democrats Never Recovered After Trump's Victory

Although six months have passed since Hillary Clinton was defeated in the US presidential election, her Democratic Party has yet to recover from the political fiasco.

© REUTERS / Carlos Barria
How Hillary Clinton May Find Her Way to Jail
The US Democratic Party cannot figure out how to regain the votes of Americans which it lost during the two terms of Barack Obama's presidency and during the presidential election of 2016, according to the television network RT's Alexander Karpov.

A number of politicians and public figures who support the Democrats' views argue that the party was seized from within by left-wing radicals and communists promoting the platform of identity, related, in particular, to transgender rights.

Meanwhile, the Democratic Party itself is losing its traditional support base: the white working class based in cities along the East Coast of the US.

American TV anchor and comedian Bill Maher has repeatedly drawn the attention of Democrats to their push for identity politics, and how they've simultaneously neglected the development of a program pertaining to pressing economic issues.

He recently called them out, saying, "this is one of the problems of the Democrats: they find out who is being insulted by Halloween costumes or the Washington Redskins football team name, while millions of people across the country are asking: 'What about saying when jobs will be returned to us?'"

New York Times columnists Mark Penn and Andrew Stein, for their part, recalled that this political leap to the left-wing took place inside the Democratic Party in the early 1990s.

© AP Photo / Pablo Martinez Monsivais
US Democrats Want to Remove Trump From White House for Mental Incapacity
They said that at the time, the Democrats "relied on identity, promoted equality of results instead of equality of opportunities and sought solutions to any problems in increasing bureaucracy," something that they said changed after Speaker Newt Gingrich took the helm of the House of Representatives.

Under Bill Clinton, Democrats returned, but in the last years of Obama's presidency, the Democratic Party again made a sharp shift to the left-wing, promoting class warfare, an increase in the powers of the government, and identity politics, according to journalists.

According to Democrat Michael Moore, a noted US documentary filmmaker, the leaders of the Democratic Party "hate the resistance movement" and don't want to struggle.

"It's time to wake up. The National Committee of the Democratic Party has no idea how to win, because they do not have a clear message, no plan and no leaders; they do not want to fight and hate the resistance movement," Moore said on his Twitter page.

Meanwhile, more Democrats have started to urge the party's leaders to stop promoting the topic of alleged Russian interference in the presidential elections as their main argument in defense of Hillary Clinton, who allegedly lost to Trump as a result of the influence of external forces.

Clinton herself is also unwilling to admit that she proved to be an unpopular candidate, and continues to blame her fiasco both on Russian hackers and her fellow party members.

© AFP 2020 / Brendan Smialowski
Hillary Clinton Jokes About Trump's 'Hidden Message to the Russians', Here's Why
Her position infuriated many in the Democratic Party, with some of them telling The Hill that Clinton went too far in her attempts to justify herself. In their opinion, it is high time for her to leave the political arena.

Democrat strategist Jim Manley, in turn, said in an interview with The Hill that many in his party are "fed up." Bernie Sanders has called for the expulsion of other Democratic leaders who reject the white working class, such as the leader of the Democrats in the Senate, Nancy Pelosi.

He said that he is not sure that "we ourselves understand what is now the best option for our party," and that he doesn't think that "we have the answers to these questions."