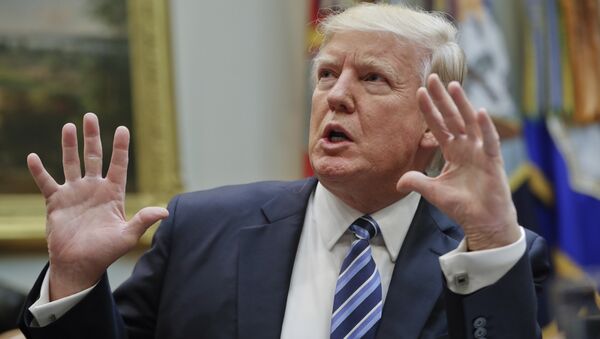 © AP Photo / Pablo Martinez Monsivais
Subscribe
International
India
Africa
A group of Democrats in the House of Representatives have moved to bring the 25th Amendment to the US Constitution into play, allowing for the removal of US President Donald Trump from office for mental incapacity.

Member of the US House of Representatives Jamie Raskin (D-MD) has introduced a bill that would create a special oversight committee to determine whether US President Donald Trump has the mental capacity to serve as president, thereby setting the stage to remove him from office under the 25th Amendment to the US Constitution, which allows for a president who is mentally unfit to carry out the duties of the office to be fired.

By way of explaining his motivation to initiate the proceedings, Raskin stated, "In case of emergency, break glass," cited by Yahoo News.

"If you look at the record of things that have happened since January, it is truly a bizarre litany of events and outbursts," the representative from Maryland added.

Raskin's newly introduced bill calls for the creation of a nonpartisan "Oversight Commission on Presidential Capacity," which would consist of members appointed by congressional leaders, according to Yahoo News.

The oversight committee, tasked with determining Trump's mental fitness, would be comprised of four psychiatrists, four physicians, and three other members, potentially to include a former president, vice president, or former top government official, according to the Free Beacon.

Raskin claimed to have support from both sides of the political aisle on Capitol Hill, asserting that some unnamed Republicans have expressed tacit agreement with the move.

Based on the wording of the 25th Amendment, a sitting US president cannot legally be declared mentally unfit to serve without the agreement of the vice-president.