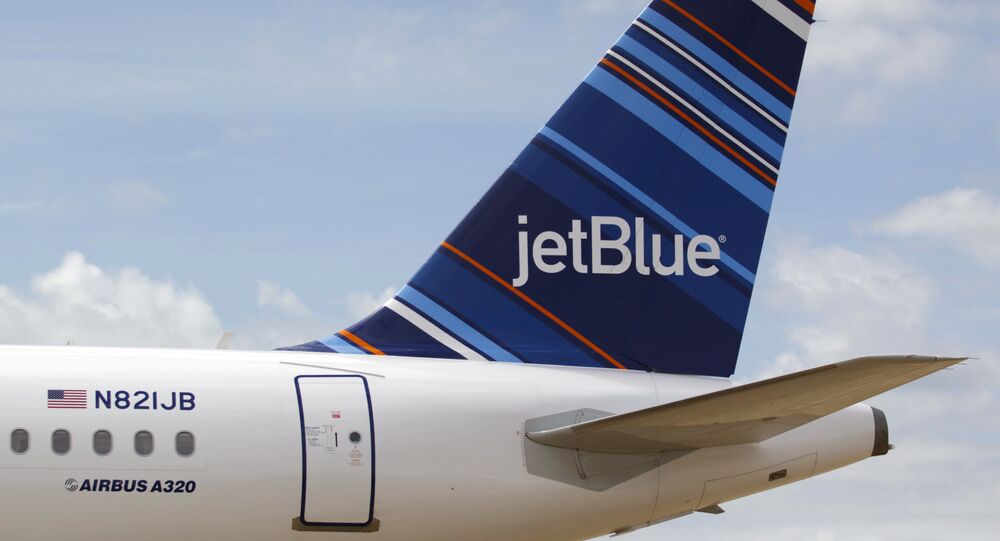 A video from a JetBlue passenger whose entire family was kicked off a flight over a birthday cake earlier this month is now going viral.

On May 3, a family was travelling to Las Vegas from New Jersey when they were kicked off a flight over a dispute involving a birthday cake.

Cameron Burke was on board the flight with his two children, aged 7 and 9, headed to Vegas to celebrate his wife Minta’s 40th birthday, when a birthday cake that they had carried onboard the aircraft sparked a massive conflict.

"We were just so happy, couldn't wait to get to Las Vegas," Minta Burke told ABC 7. "And all of a sudden, this occurred, and my two children are screaming, crying. They're confused, not knowing what's going on. They were traumatized."

© REUTERS / Louis Nastro/File Photo
Oops! Cockpit Access Codes for United Airlines Published Online
In the footage that Burke recorded, the children are seen crying and insisting that they did not do anything wrong. An officer then approached Burke and informed him that the family is not in trouble — but would need to be rebooked on a later flight.

A flight attendant had reportedly asked Burke to move the cake from an overhead bin to a different compartment, eventually telling him to put it under the seat in front of him.

“A flight attendant nicely asked me to remove the cake from that compartment, so I moved it to another one,” Cameron told the New York Daily News. “She then asked me to move it to underneath the seat in front of me, I did.”

Though Burke compiled, a second flight attendant began to berate the first one who had been assisting the family

“She said I was being non-compliant,” Burke recalled to the paper. “I said, ‘Miss, have you been drinking?’ Because her behavior was irrational and she stormed off.”

The airline employee then reportedly asked Burke to exit the airplane, which is when he began to film the encounter.

After the family refused to leave the plane, the crew instructed all passengers to exit in order for them to remove the family.

The family’s tickets were refunded and they were asked to leave the JetBlue terminal at the airport. The family ended up booking another flight on United Airlines for the next day.

JetBlue is standing by their employees, and issued a statement to ABC alleging that Burke had been belligerent.

"(The customer) refused multiple requests from the crew to remove the items … became agitated, cursed and yelled at the crew, and made false accusations about a crewmember's fitness to fly."

Burke is now speaking out, demanding that the flight attendant with whom he had the altercation be fired.