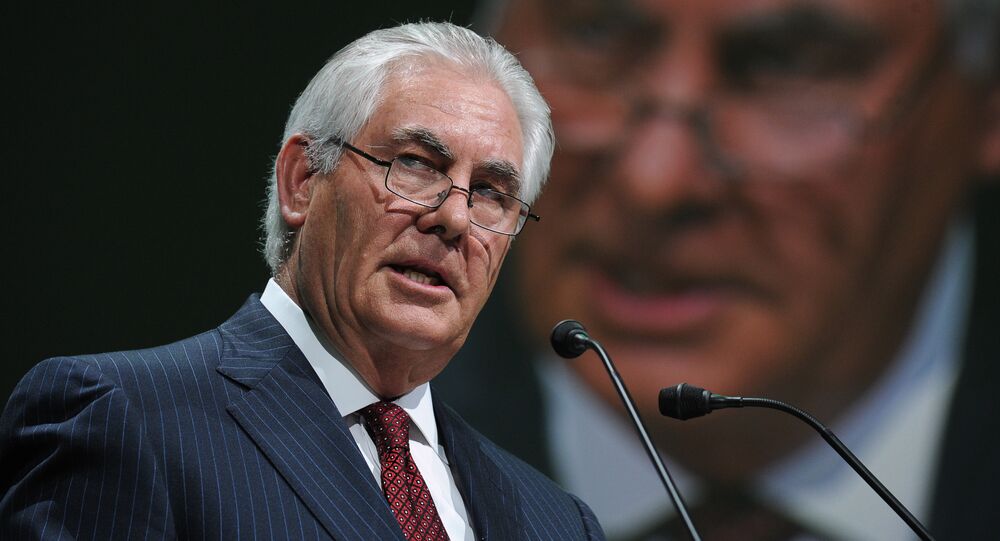 Donald Trump confirmed on Tuesday that he would nominate ExxonMobil Corporation CEO Rex Tillerson to serve as the US state secretary.

MOSCOW (Sputnik) – US President-elect Donald Trump has confirmed that he would be nominating Rex Tillerson, the head of the ExxonMobil oil company to serve as the US state secretary, Trump’s transition team said Tuesday.

"Among the most accomplished business leaders and international dealmakers in the world, Mr. Tillerson has spent his career protecting the jobs of his employees, who number more than 70,000 … A Secretary of State, he will be a forceful and clear-eyed advocate for America’s vital national interests, and help reverse years of misguided foreign policies and actions that have weakened America’s security and standing in the world," the statement, circulated by US media, read.

I have chosen one of the truly great business leaders of the world, Rex Tillerson, Chairman and CEO of ExxonMobil, to be Secretary of State.

Tillerson received a Bachelor of Science in civil engineering from the University of Texas, Austin. In 1975, he began career at Exxon Company as a production engineer. In 1989, he took the position of general manager of the central production division of Exxon Company USA, where he headed oil and gas companies in Texas, Oklahoma, Arkansas and Kansas. In 1992, he was appointed adviser for oil and gas production at Exxon Corporation.

In 2001, he took the position of senior vice president of ExxonMobil Corporation.

On March 1, 2004, he was appointed president and chairman of the board of ExxonMobil Corporation.

Since January 1, 2006 Tillerson has been CEO and chairman of ExxonMobil Corporation.

Tillerson is a trustee for the American Petroleum Institute and a member of the Society of Petroleum Engineers (SPE).

He is also a trustee of the Center for Strategic and International Studies (CSIS).

© Sputnik / Ramil Sitdikov
What Russia Should Expect From Trump Secretary of State Pick Rex Tillerson
In 2013, he was elected member to the US National Academy of Engineering.

Tillerson is also vice president of the Ford's Theatre Society and one of the leaders of the Boy Scouts of America.

He is also a member of the Chancellor’s Council, Development Board and the Engineering Advisory Board for the University of Texas, Austin, where he was named a distinguished alumnus in 2007.

In 2011, he received an honorary doctorate of engineering from Worcester Polytechnic Institute.

In 2012, Tillerson was awarded the Order of Friendship upon executive order of Russian President Vladimir Putin for his contribution to the development and strengthening of cooperation with Russia.

Tillerson ranked 25th in Forbes’ The World’s Most Powerful People 2015.

The incoming US state secretary is married and has four children.

Kremlin Sees Possible US State Secretary Tillerson as a Professional

Choice of Tillerson as State Secretary to Reset US-Russia Relations