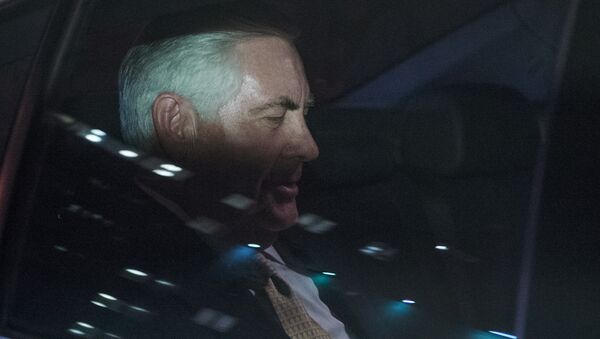 © Sputnik / Ramil Sitdikov
/
Go to the mediabank
Subscribe
International
India
Africa
On Saturday, unnamed sources in the Trump transition team told US media that President-elect Donald Trump plans to nominate Exxon Mobil CEO Rex Tillerson for the post of Secretary of State. Russian and alternative media have rushed to comment on the possible nomination, and how it is likely to affect Russia-US relations.

Two sources in Trump's team told NBC News Saturday that Tillerson, the 64-year-old life-long oil man with decades of experience in the private sector, but no formal experience in government, is the top choice for post of the US's top diplomat. Observers say that ExxonMobil's operations in over fifty countries around the world have given Tillerson extensive experience in major international negotiations.

Trump Expected to Nominate Exxon Mobil CEO Tillerson Secretary of State
The Trump transition team sources stressed that nothing would be finalized until President-elect Trump himself officially makes the announcement, which could happen as early as next week. Tillerson's nomination would then be subject to confirmation hearings in the US Congress, where John McCain has already promised to lead the charge in probing the ExxonMobil CEO for his suspected ties to Russia and Russian President Vladimir Putin.

Just spoke to Sen. John McCain- a harsh Putin critic- he told me he has "concerns" about Tillerson as possible SOS and his ties to Russia.

​On Sunday, Trump told Fox News host Chris Wallace that Tillerson's candidacy made sense because he was not just a business executive, but "a world class player."

"He is in charge of, I guess, the largest company in the world," Trump said. He's in charge of an oil company that's pretty much double the size of his next nearest competitor. It's a company that's been unbelievably managed. And to me, a great advantage is that he knows many of the players. And he knows them well."

One of those players is Russia. Citing an example of the CEO's negotiation skills, Trump noted that Tillerson "does massive deals in Russia," to the benefit of US business.

China Already Has 'Plan B' to Cope With Trump's 'Unpredictability'
Indeed, Tillerson's extensive business ties to Moscow have resulted in a mix of praise and criticism for Trump's choice among the media, which has split into two camps over the choice, depending on whether or not it supports Trump, and also its editorial line on Russia.

Tillerson joined Exxon in 1975 as an engineer, working his way up to become president of the company in 2004, and Chief Executive Officer in 2006.

The Media is FREAKING Tillerson has "close ties to Russia." I'm sorry, but do they WANT WW3? What's wrong with getting along w/ Russia?

​In 2011, Tillerson negotiated an agreement with Russian state oil company Rosneft for drilling rights in the Russian Arctic and projects in the Black Sea valued up to $300 billion. A year later, in 2012, Tillerson was decorated with the Order of Friendship, an honor awarded to foreign nationals for efforts to improve relations with Russia.

According to the Wall Street Journal, Tillerson's ties to President Vladimir Putin actually go back to the 1990s, when Tillerson worked as a representative of Exxon's interests in Russia. Former Clinton-era deputy defense secretary John Hamre asserts that Tillerson "has had more interactive time with Vladimir Putin than probably any other American, with the exception of Henry Kissinger." 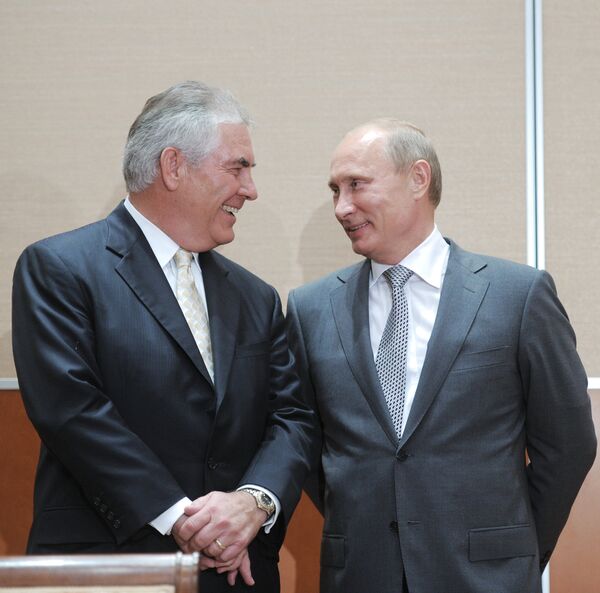 Explosive Washington Post Story on 'Russian Hackers' Can't Name a Single Source
ExxonMobil's Arctic project and others were partially or completely halted in 2014 as the result of the downturn in relations between Russia and the West over the crisis in Ukraine. In May 2014, Tillerson sharply criticized the sanctions, saying ExxonMobil is generally opposed to sanctions policy, "because we don't find them to be effective unless they are very well implemented comprehensively," and due to the "broad collateral damage" they cause. In 2015, it was estimated that the company had lost up to a billion dollars due to sanctions, and billions more in potential lost revenue.

In June 2016, Tillerson visited Russia to participate in the St. Petersburg International Economic Forum, an international business gathering held under the auspices of the Russian president. Asked about the impact sanctions have had on his company, Tillerson jested that "it's a question for the government –if there's any US government official [here] who would like to respond…" His response was met with laughter and applause from the audience. Tillerson and other US business leaders had been explicitly advised against attending the forum.

​Asked to comment on Tillerson's possible nomination, Russian Senator Alexei Pushkov told RIA Novosti that while it was too early to suggest that he is a shoo-in, "the fact that Tillerson is the main candidate confirms the seriousness of [President-elect] Trump's intentions to opt for the normalization of relations with Russia."

Neocons' Last Hurrah: Arms Shipments to Syrian Rebels Come Too Little, Too Late
In the run-up to last month's election, Trump stated repeatedly that he would like to see the normalization of Russian-US relations, along with cooperation on problems of joint interest, such as global terrorism.

Pointing to Exxon Mobil's considerable experience in implementing large projects in Russia, and Tillerson's numerous meetings with President Putin, Pushkov suggested that the businessman "can be regarded as a person who thinks of Russia first and foremost as an important trade and economic partner." In other words, the senator noted, Tillerson can be seen as a realist and non-ideological pragmatist for whom US national and business interests would be the key priorities.

Accordingly Pushkov said that he would expect to see a more balanced approach toward Russia from a Secretary of State Tillerson. "If the appointment goes ahead, it will be a sign of Trump's political courage," his willingness to go against the will of the ideological wing of US foreign policy. "In addition, the Tillerson candidacy can be seen in the context of recent statements by Trump that the US will stop meddling in the affairs of other countries and engaging in the export of democracy."

US, EU Companies Interested to Get Back to Russian Market - Trump's Ex-Adviser
Konstantin Kosachev, chairman of the Russian Senate's Committee on Foreign Affairs, was more cautious, saying that he predicts the US Congress will do everything in its power to try to prevent Trump from pursuing his new foreign policy, particularly in relation to Russia.

In Kosachev's view, Congress will allow Trump to pursue a different policy with regard to almost anyone, including Washington's European NATO partners, and even with China, but not Russia. "Any attempt to improve relations with our country will be interpreted as going against US national interests," even if this policy is "falling to pieces and becoming a thing of the past," he said. Tillerson's possible nomination should be seen in this light, according to the senator.

US alternative media has been similarly cautious in its assessment. The American Conservative columnist Daniel Larison noted that while it's "good news" that Trump didn't pick neoconservatives Rudy Giuliani or Mitt Romney for the post, Tillerson's lack of foreign policy experience is troubling, particularly given the fact that arch-neocon John Bolton has reportedly been proposed as Tillerson's deputy.

"That's better than putting Bolton in charge, but not by much," Larison wrote. "The fact that Bolton is receiving a top job anywhere in the administration is an indictment of Trump's judgment," he added.

As for Tillerson's reported ties to Russia, the journalist suggested that while "those ties might be useful in pursuing improved relations with Moscow…they are also likely to make his confirmation much more difficult, on account of the intense hostility he is sure to encounter from hard-liners in the Senate."