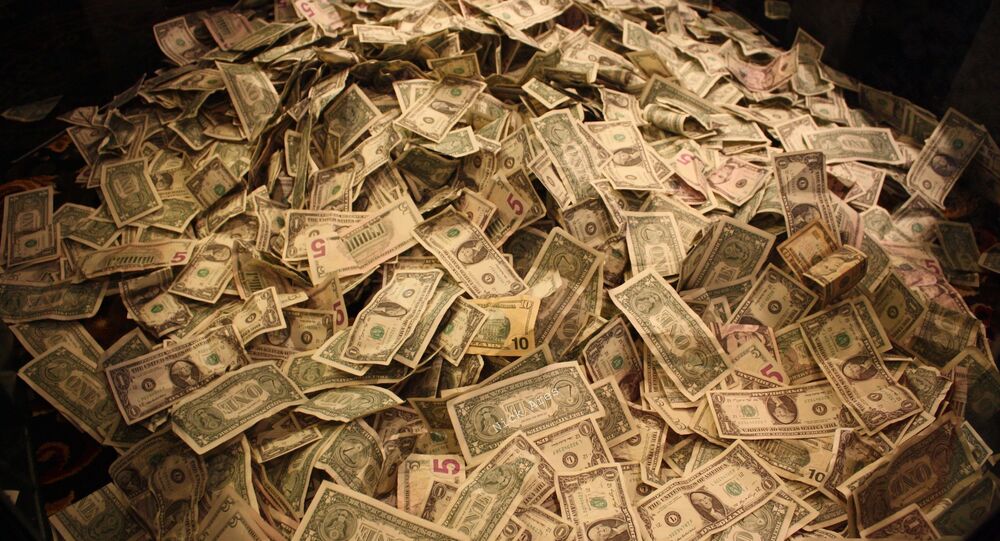 President-elect Donald Trump's victory party is likely to be cut short once he realizes the mess of problems left to him by his predecessor, including America's trillions in debt.

The US national debt has surpassed $19.8 trillion dollars, or nearly $61,000 for every man, woman and child in America. The debt is expected to surpass $20 billion in less than eight weeks, and probably before Trump even steps into the Oval Office.

© REUTERS / Dylan Martinez/File Photo
Trump Advisors Consider JPMorgan CEO for Next US Treasury Secretary
In March, US Congress made a deal with the White House to extend the debt limit to $20.1 trillion until President Obama leaves office, meaning that President-elect Trump will have to negotiate with Congress almost immediately after his inauguration. With Republicans retaining control of Congress, the Trump administration will probably be able to come to an agreement with lawmakers on raising the debt ceiling, thus avoiding a repeat of the 2011 government shutdown.

The question, both for the US economy and the global financial and economic system as a whole, is just how much further America's massive debt can grow before causing major perturbations.

In his eight years in office, President Obama nearly doubled the national debt, from $10.63 trillion in 2009 to the above-mentioned $19.8 trillion today. According to IMF figures, the debt-to-GDP ratio has passed the threshold of 100%, and is now at 107.5% of GDP.

© REUTERS / Andrew Kelly
Trump to Start Receiving Daily National Intelligence Briefings This Week
Many economists have long claimed that the US's good credit rating (AA+/A-1+ according to the S&P), combined with the fact that 70% of its debt is denominated in dollars –the de facto world currency, make the chances of the country defaulting on its obligations practically zero.

However, other observers, including political economist and journalist Maria Bezchastnaya, say that the issue of servicing this massive debt load may turn into a massive problem in the future. Today, she explains, 3% GDP growth rates and low interest rates make servicing the debt tolerable, "but in the future that could change. In the second quarter of 2016, the US economy grew by only 1.2%, and the Federal Reserve is making preparations for a gradual rate hike. Under these circumstances, servicing the debt may demand more and more of the budget."

The debt, she noted, is already beginning to snowball. In the first two weeks of October alone it grew by $170 billion; between January and September, $1.4 trillion was added to the debt. "Furthermore, although most of the debt is in the hands of national lenders, about 30% belongs to other states – particularly China ($1.244 trillion) and Japan ($1.137 trillion). Russia is also in the list of the top 20 lenders, holding $86 billion in US bonds."

© AP Photo / Jae C. Hong
Foes on Political Right, Left Will Likely Fight to Undermine Trump at Every Turn
Unfortunately, Bezchastnaya stressed, neither Trump nor Clinton seemed to offer a real solution on how to deal with the debt during the election campaign. Trump promised to review trade and military agreements with foreign creditors, and Clinton proposed a progressive income tax to at least avoid further increases.

The problem, the journalist stressed, is that even with growth of nearly 3%, America's debt is growing faster than the economy. "And if things stay the same, it will begin to create problems for both America and the world."

Trump Advisors Consider JPMorgan CEO for Next US Treasury Secretary

Foes on Political Right, Left Will Likely Fight to Undermine Trump at Every Turn