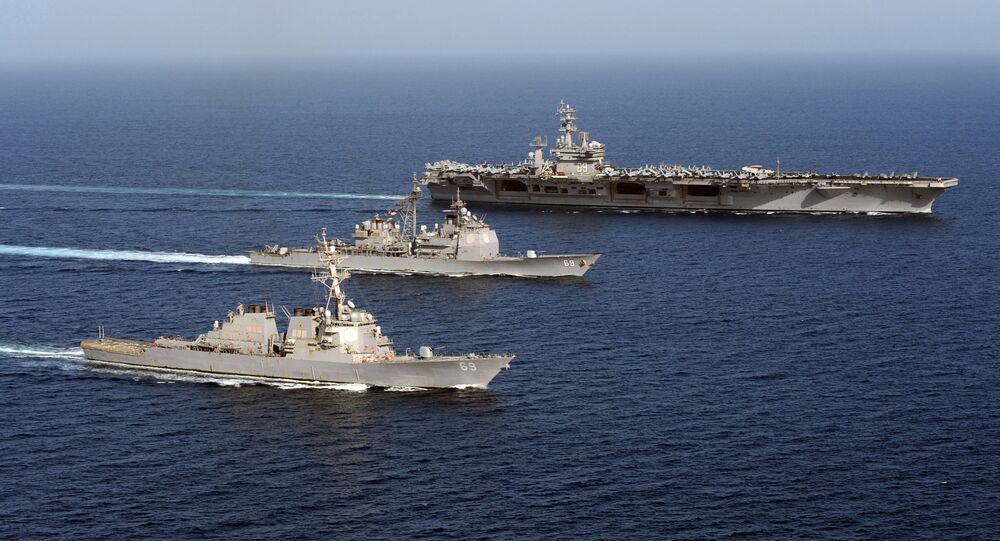 Amid an ever increasing threat posed by terrorist groups and potential threats from nation states, the next US administration will face a worrying capability gap in at least its first weeks. The reason for that is the deployment of aircraft carriers that is running behind schedule.

The US Navy's most expensive aircraft carrier, the $13 billion USS Ford (CVN-78), built by Huntington Ingalls Industries Inc., had been expected to be delivered in 2014. However, its turbine generators were damaged during trials due to faulty voltage regulators. Earlier technical problems included the carrier's runway and defense capabilities, munitions movement. The ship deployment was expected in November this year. However, Navy spokeswoman Capt. Thurraya Kent said the USS Gerald R. Ford won't meet November's delivery deadline as it needs to be put through shock trials.

© AFP 2020 / POOL / Kim Hong-Ji
US Aircraft Carrier to Take Part in S Korea War Games Amid Rising Tensions
Capt. Thom Burke, director of fleet readiness, said that the delay time will depend on the carrier performance during the test. "A shock trial is an uncertain event. What's going to break when you do it?" he said.

The carrier Dwight D. Eisenhower, which is patrolling the waters of the Persian Gulf at the moment, waits to be relieved in January by the carrier George H. W. Bush. But the Bush is running behind that schedule due to the lack of correspondence between the ship overhaul and the strike training group.

"The Navy organization in charge of making sure the Bush strike group is fully trained appears to have been unprepared to quickly implement a plan to deal with the delay, and several more weeks went by while Norfolk-based US Fleet Forces Command (USFFC) seemingly struggled to determine the way ahead and make a choice between compressing the training period to deploy on time or delaying the deployment to train up more fully," according to Defense News.

Navy officials have been pointing at the problems with the Navy's four shipyards — Norfolk, Puget Sound, Pearl Harbor, and Portsmouth — for several years.

The root cause for the deployment delays is budget cuts and workforce reductions. As Rory O'Connor, a spokesman for NAVSEA, said, "The workload assigned to the four naval shipyards has increased over the last several years."

© Sputnik / Alexei Danichev
Russian Company Ready to Start Building Helicopter Carrier – Company's President
O'Connor noted that the four shipyards are rebuilding their work forces which does not immediately solve the problem as "employees need to be trained and it takes time to gain experience."

Another difficulty is the availability of a shipbuilding yard for overhauls. A shipyard should usually have a year to plan that would involve determining work, the length and scope of a job, sequencing, ordering parts and materials in advance, workforce. Not surprisingly, personnel reductions affected the process of overhauling the carriers.

So far, Navy officials have not commented on the time at which they expect the carriers will be ready to deploy.