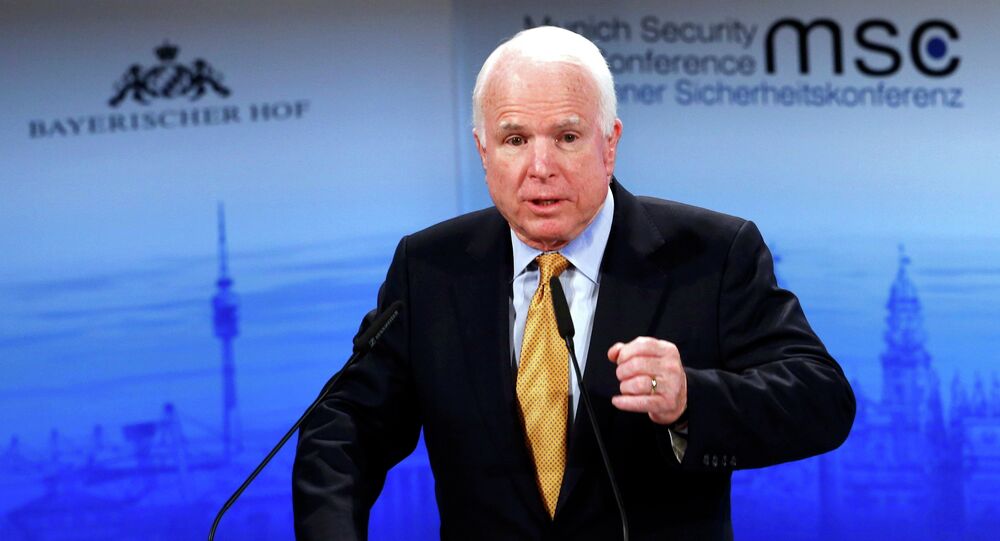 McCain: Reports Assad Could Do Airstrikes Under New Ceasefire 'Unbelievable'

Reports that Syrian President Bashar Assad will be authorized to continue airstrikes against certain terrorist targets under the ceasefire brokered last week by the United States and Russia are appalling, US Senator John McCain told Sputnik.

WASHINGTON (Sputnik), Leandra Bernstein – The Republican senator argued that President Barack Obama’s administration has "abandoned all pretense of saying Assad has to go," and he called the results of the ongoing negotiations "humiliation."

"I just read that they were going to, under certain circumstances, let Bashar Assad do airstrikes…. This is unbelievable," McCain said Monday when asked to comment on the ceasefire.

On Friday, US Secretary of State John Kerry and Russian Foreign Minister Sergei Lavrov hashed out a ceasefire agreement aimed at reducing violence and restarting political talks in war-torn Syria.

© Sputnik / Mikhail Voskresenskiy
Assad Not Allowed to Go After Terrorists Under Ceasefire - US State Dept.
Under the agreement, Syrian government forces are expected to halt hostilities against rebel forces but can continue strikes against terrorist groups, specifically Daesh and the Nusra Front.

The ceasefire was to go take effect on Monday, although there already have been reports of violence. If it is maintained successfully for seven days, the United States and Russia are to begin coordinating anti-terrorism activities through a Joint Implementation Center.