On Monday, students at an Arizona high school staged a walkout in protest of a student being ordered to remove her Black Lives Matter t-shirt last week.

Fifteen-year-old Mariah Harvard wore the shirt for picture day on August 23 at Buckeye Union High School, in the suburbs of Phoenix. 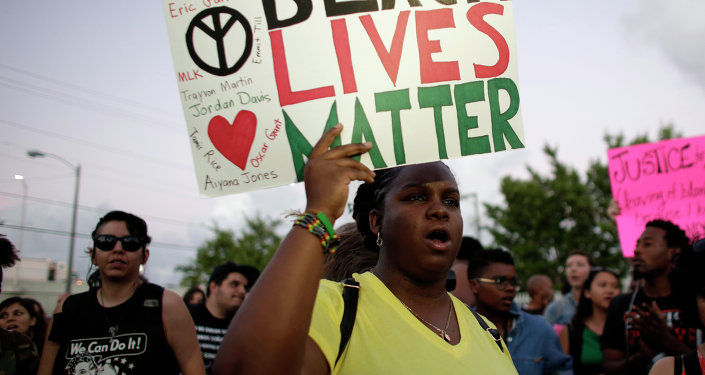 After reports that a student had complained, Harvard was ordered by school administrators to remove her shirt as it could "disrupt the education process." She complied, but only after writing about the incident on her Facebook page and posting a photo of herself wearing the shirt.

She said the reason she wore the shirt was because of an argument with another student a few days earlier in which she was told, "black lives don’t matter," and that she had seen other students wear political T-shirts that could be considered offensive, including shirts featuring the Confederate flag.

She wrote, "While wearing the shirt I have been verbally attacked MANY times, I never meant to imply because black lives matter others don't!" and "On top of that while attending Buckeye I’ve seen a young lady who wore a Confederate flag shirt that clearly supports racism, the creator of the Confederate flag in his own words said, 'As a people we are fighting to maintain the heaven-ordained supremacy of the white man over the inferior or colored race.'"

Administrators at Buckeye quickly concluded that Confederate flag shirts are also banned. Santoyo, Harvard and eight other students walked out during class on Monday morning. Each of them wore Black Lives Matter T-shirts and held signs that read, "Vision for Black Lives."

They were joined by their parents, civil rights organizations, representatives from the Phoenix chapter of the Black Lives Matter organization, and local politicians to support their action. Arizona congressional candidate Isha Graves said that she was, "proud they were standing up for what they believed in."

The school published a statement on its website saying the "district strives to remain politically neutral while allowing student expression," but that they could not allow expressions to "interfere with the learning process and become a potential danger to students."