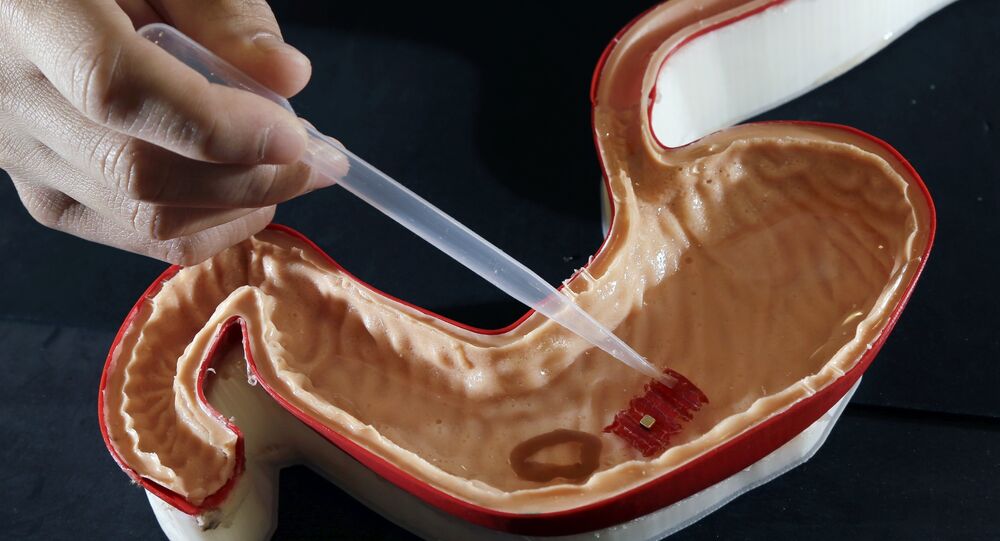 A tiny, ingestible robot with the ability to retrieve foreign objects, deliver medicine and dress wounds is being designed by researchers at the Massachusetts Institute of Technology (MIT).

The instrument has been dubbed the "origami robot," for its ability to be folded, like an accordion, into an ice capsule to be swallowed. Professor Daniela Rus, director of MIT's Computer Science and Artificial Intelligence Laboratory explained, "You swallow the robot, and when it gets to your stomach the ice melts and the robot unfolds. Then, we can direct it to a very precise location."

It will be some time before the robot is tested on animals and humans, so researchers are using a silicone stomach for testing. Rus commented that one of the paramount functions of the robot will be saving children who swallow disc-shaped batteries, a problem becoming more commonplace in developed countries. These batteries are potentially fatal if swallowed, as they can quickly burn through stomach lining. Before too much damage is done, the origami robot retrieves the ingested battery and maneuvers it down the intestinal tract and out of the body.

The flexible frame of the robot is biodegradable, made with a pig-gut casing similar to that of sausage. Researchers searched high and low in Boston’s Chinatown before finding a material that would dissolve once it had completed its mission.

Rus said, "They tried rice paper and sugar paper and hydrogel paper, all sorts of different materials.We found that sausage casing has the best properties when it comes to folding and unfolding and controllability."

Offered considerations to religious prohibitions on pork, Rus said that developing a kosher version of the robot would not be a problem.

The robot would be controlled by magnetic forces, and have embedded inside a neodymium magnet resembling a small metal cube. Magnetic fields are changed by joysticks operated by researchers, allowing the robot to move through the stomach directly to the object it seeks to expel, or the area to be dressed or medicated.

Steven Guitron, an MIT graduate student in mechanical engineering, states that it will likely not hurt to swallow the robot. He said, "I'm sure if you swallowed an ice cube accidently, it's very similar."

The MIT group exhibited their research at a Swedish robotics conference this summer, and they currently have a patent pending for the technology. Medical companies have already expressed interest, according to Rus, but this would mean the requisite testing on humans and animals.

William Messner, a professor of mechanical engineering at Tufts University in Massachusetts who is not affiliated with the experiment, says the robot is “a nifty idea” but probably will not be a fixture in hospitals for at least another decade. He thinks the technology could also aid in performing biopsies.

Messner said that the US Food and Drug Administration "has to get involved with anything like this and they're rightfully very careful about any kind of medical instrument. The big problem is, what if it gets stuck? Now you've really got a problem."

The project, while interdisciplinary, fits into the growing field of "soft robotics" that emerged in 2013 with the Tufts-based Soft Robotics journal. The Boston area is a nerve center for shape-changing machines, whose mobility makes them an asset in surgery and other delicate procedures.