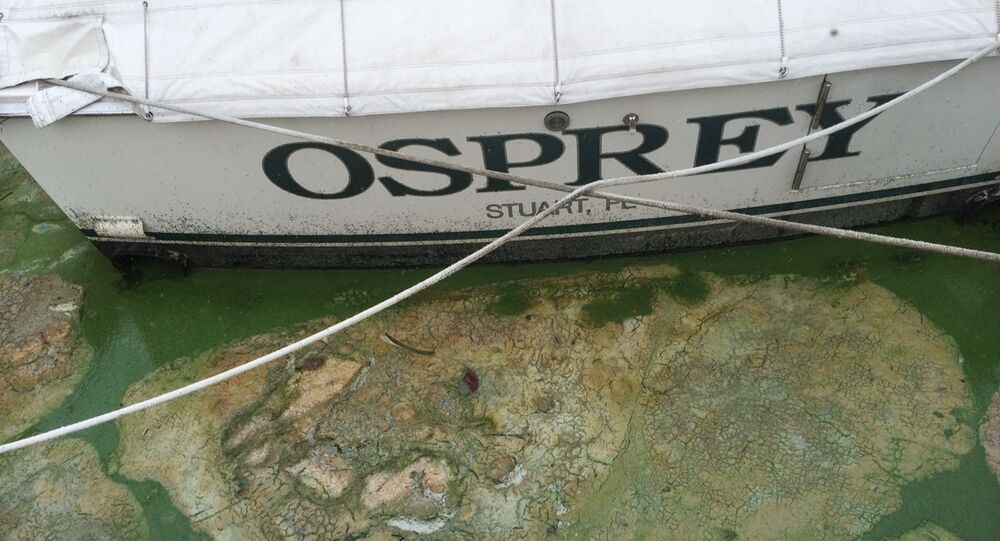 Toxic Algae on Florida Beaches Lead to State of Emergency

Florida Governor Rick Scott has declared an emergency in four south Florida counties, as a thick, odorous algae bloom has begun to spread in the surrounding waters. Residents of St. Lucie, Martin, Palm Beach and Lee counties have been warned to stay out of discolored water and to not use tainted water for watering lawns or other personal uses.

The bloom was caused by a chemical leak in Lake Okechobee last month which raised levels of toxicity to 20 times over World Health Organization (WHO) safety standards. Republican Governor Scott blamed the severity of the bloom on inaction by the White House.

"Florida’s waterways, wildlife and families have been severely impacted by the inaction and negligence of the federal government not making the needed repairs to the Herbert Hoover Dike and Florida can no longer afford to wait," Scott said. "Because the Obama Administration has failed to act on this issue, the U.S. Army Corps of Engineers continues to discharge millions of gallons of water into the St. Lucie and Caloosahatchee estuaries, resulting in the growth of blue-green algae which is now entering residential waterways in South Florida. Although the President has failed to do what is needed to address this growing issue, the State of Florida will devote every available resource to find solutions for the families and businesses in this area."

Scott directed the Department of Environmental Protection to open a telephone reporting hotline for citizens affected by the algae bloom, and has deployed water-sampling teams in areas to calculate toxicity, among other measures.

The algae has been described as "guacamole thick" and "thick like paint," with one Miami resident remarking, "The only way to describe how it smells is like a hundred dead animals that have been sitting in the street for weeks."

Exposure to these toxins can cause vomiting, skin rashes, respiratory issues and also destroy native aquatic flora and fauna.

Mark Perry, executive director of the Florida Oceanographic Society in Stuart, Florida, said, "I can't give figures for the likelihood of a fish kill, but as long as conditions stay the same, long, sunny days; lots of nutrients in the water; and low salinity, it could happen," adding that he was disappointed with the governor's handling of the crisis.

Jordan Schwartz, an employee of the Ohana Surf Shop said the town of Stuart has been a "ghost town" since the bloom, and laments the dropping numbers of sightseers. "The discharge has affected our tourism, it’s the height of 4th of July weekend and we should be packed in here," he remarked.

Tourist Tory Osborne noted the impact the bloom has had on travelers who usually flock to enjoy Florida’s gentle climate and tropical waters. "To see just a few people out here is really sad," he said, "This beach is usually packed with lots of families and kids because the water’s so shallow."

The Army Corps of Engineers announced that it will reduce the east-west flow of Lake Okeechobee. Senator Bill Nelson (D-FL) said, "The idea is to put into these water storage areas and then into water restoration areas where the grasses in there cleanse the nutrients out of the water before you send it further south."

Clinton Catches Up With Trump in Swing State of Ohio, Leads in Florida

Charge It: Florida Bank Issues First Credit Card to Be Used in Cuba