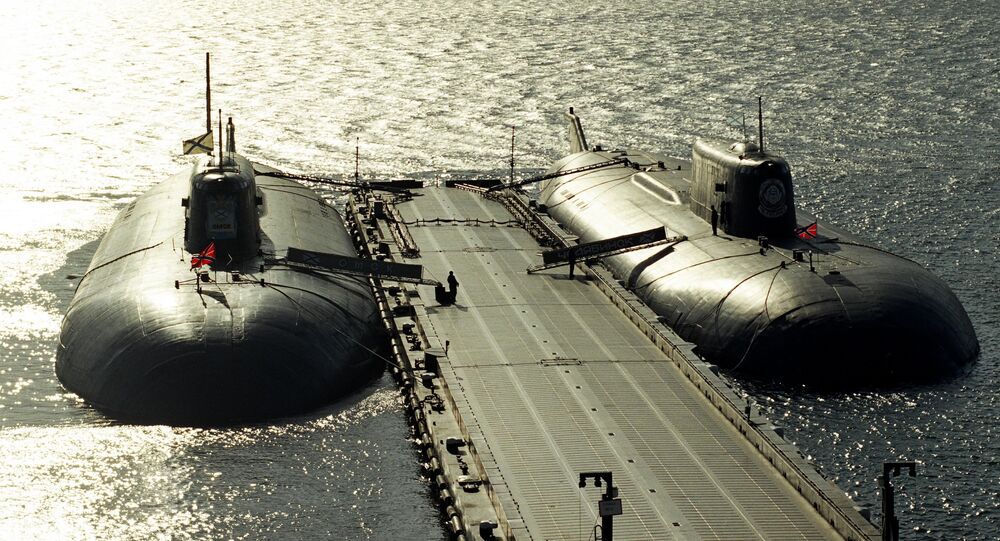 Even though the Russian Navy may be no match for America’s naval might, some of its submarines are a long way ahead of their American analogues, Vzglyad business newspaper wrote.

© AFP 2021 / POOL / Guang Niu
Under the Sea: Russian, Chinese Submarines Challenge for US
During a recent speech at the New London Naval Submarine Base in Groton, Connecticut, US Defense Secretary Ashton Carter said that he was taking Russian and Chinese submariners very seriously.

The submarine fleet projects US strength to "competitive countries" Russia and China, he said adding that he hoped that those two countries would never become “aggressors.”

“I'm also confident that we'll retain [undersea superiority] in the future, but it's not a birth right. We have to work at it,” Carter  said.

In Moscow, Captain First Rank Konstantin Sivkov agreed with Ashton Carter in that the Russian submarine fleet was qualitatively and quantitatively lagging behind America’s.

“Should we be catching up with them? Well, if we are going to stand up for our interests on a global scale, then yes, we should. But if we want to lie low and just stick to our shores, then I don’t think we should,” Sivkov said.

According to 2014 figures, Russia led the US only in the number of nuclear submarines armed with missile cruiser (seven to four). Moreover, Russia has 57 diesel-electric subs while the US has none.

The US Navy is staking on nuclear-powered submarines, which though more expensive, are better suited for autonomous missions. The US now has 53 attack nuclear subs compared to Russia’s 16.

Even though the past few years have seen a notable jump in the number of Russian submariners touring the oceans, this is still shy of what Russia projected during the Soviet years.

That said, the Russian submarine fleet is still the world’s second most powerful.

“The Chinese have no submarines capable of competing with the American subs, while we have about ten such submarines,” Sivkov said.

According the Defense News, China now has three nuclear powered missile submarines, six attack submarines and 53 diesel-electric ones – more than any of its neighbors can boast.

Still, China will remain in third place unless it makes a qualitative jump in the field of armaments.

According to unclassified information, Russia currently has at least several nuclear submarines boasting absolutely exceptional capabilities, above all when it comes to their ability to dive to depths even the best US subs can’t reach.

There have been reports about a top-secret Russian nuclear sub capable of staying for weeks at the crushing depth of 6 kilometers!
Mikhail Nenashev, the president of the All-Russian Movement for Support of the Navy, warned against underestimating the capability of the country’s undersea might.

“Let them show me a place in the oceans where we can’t stand up to them,” he said, mentioning the recent Kalibr cruise missiles launches by a Russian diesel-powered sub against Daesh terrorists in Syria.

“Besides, the improved professionalism of our submariners’ achieved in the past several years enables us to  effectively solve tactical and strategic tasks anywhere in the world. We certainly need a few dozen modern subs, but even with what we have I wouldn’t advise the Americans to test our combat capability,” Nenashev emphasized.