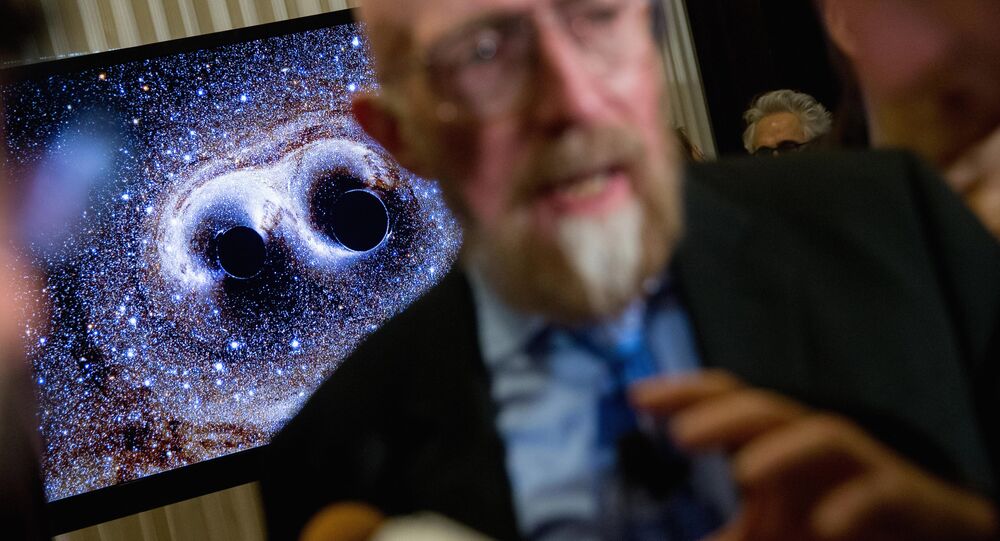 Two young US-based Indian researchers working on gravitational wave project say these waves, predicted by Einstein a hundred years ago but only recently discovered, can act as a sixth sense for humans to comprehend the universe.

Gravitational waves — cosmic ripples that distort the fabric of space-time itself — were predicted by Albert Einstein in his theory of general relativity in 1916. But they were only actually proved a century later, September 14, 2015 and announced on February 11, 2016 by the Laser Interferometer Gravitational-Wave Observatory (LIGO) Scientific Collaboration and Virgo Collaboration.

© Flickr / NASA Blueshift
Einstein Was Right! Existence of Gravitational Waves Finally Confirmed
Physicists have shown how a collision between two black holes about 1.3 billion light-years from Earth, that merged into a single, more massive spinning black hole have created gravitational waves big enough to be felt on earth.

These "ripples in the distortion of space and time" will provide information on the cosmos that wouldn't have been possible by peering through any kind of telescope, Karan P. Jani and Nancy Aggarwal, Indian student scientists who work with the LIGO told IANS.

"Gravitational waves are a completely new way of seeing the universe. It's like humans can now perceive the sixth sense beyond the five, to comprehend the universe," said Jani, a fourth year PhD researcher in astrophysics at the Georgia Institute of Technology.

© Flickr / Charly W. Karl
Gravitational Waves for Dummies: Top Five Things You Need to Know
"The energy released during collision was 50 times more than all the stars in the universe combined at that instance," added Jani, whose work involves simulating black holes on supercomputers and searching for massive black hole collisions in LIGO data.

On March 31, India and the US signed an agreement for a new LIGO project in India during Prime Minister Narendra Modi's visit to Washington. The prime minister also met Indian student scientists, including Jani and Aggarwal.

"During our meeting, the prime minister said he would like the LIGO scientists to make frequent India trips to popularize the science in colleges in India," Aggarwal said.

​The LIGO is a joint physics experiment and observatory to test a component of Albert Einstein's theory of relativity, the existence of gravitational waves. More than 900 scientists worldwide are involved in the project. India is the third highest membership.

The $1 billion LIGO experiment bounces a laser beam between mirrors that are positioned at either end of two 4-kilometer arms. If a gravitational wave passes through the detector, the length of one of these arms will change ever so slightly compared to the other, affecting the arrival time of the laser light by a fraction of a second.