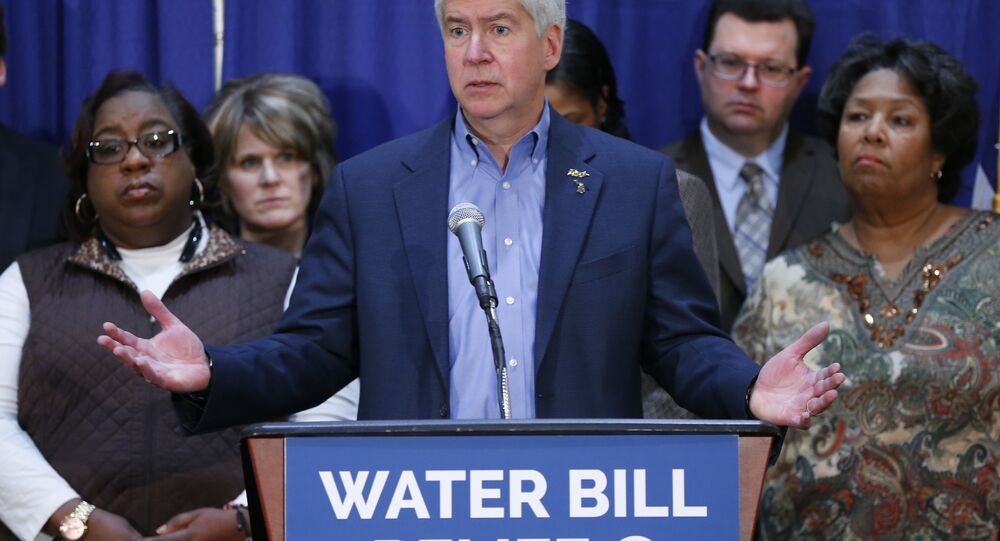 As people continue to succumb to lead poisoning after one of the greatest mass poisonings in US history, the government bickers over whether they should lift a finger to save lives.

The fight over who is responsible for Flint, Michigan, once a proud factory town and a former headquarters of American car manufacturing, became a leaded wasteland continues to go on. Worse yet, the fight over whether to fix the problem has become a hot topic of debate with members of Congress stopping an aid package for the mostly ethnic-minority city.

© AP Photo / Paul Sancya
Key Official Behind Flint’s Poisoned Water Crisis Resigns, Won't Testify Before Congress
It's been five months since the state of Michigan switched Flint's drinking water source to the Great Lakes after a lengthy and disastrous experiment using the Flint River to provide water to Flint’s roughly 100,000 residents that started in 2014.

Residents still can't drink what comes out of their taps because none of the affected pipes have been fixed or replaced.

In the latest salvo over the crisis, Senator Mike Lee of Utah is holding up a federal funding package designed to address the issue of high lead levels found in Flint’s water. Lee argued in a statement on Friday that no federal aid is needed for what is effectively a state issue.

"The people and policymakers of Michigan right now have all the government resources they need to fix the problem," Lee, a Republican, said. "The only thing Congress is contributing to the Flint recovery is political grandstanding."

Senators from both parties reached a tentative deal for a $220 million package to fix and replace lead-contaminated pipes in Flint and other cities. However, Lee has managed to stop it from going to a vote.

Dying by the Dozens

When Michigan changed the city’s water source to the Flint River, it did not treat the water which corroded the pipes, leaching lead and heavy metal into the water that went into the taps of residents’ homes. Lead-tainted water is known to stunt childhood development and impact nearly every part of the human body and is now being linked with a local outbreak of Legionnaires Disease. By the time the water was switched back, the pipes were already damaged so leaded water continues to pour out of taps in many parts of the area.

© Flickr / Petras Gagilas
Michigan Loan Deal Kept Flint From Switching Back to Safe Water Source
While people wait for action on the pipes, volunteers continue to truck bottled drinking water into the city, though the effort is not able to keep up anywhere near the demand. Additionally, residents are still forced to shower and clean their homes with brownish water.

Already at least 45 people been diagnosed to Legionnaires Disease believed to be caused by lead poisoning. Five have already died. An untold number of other households, especially with children, have also been impacted.

More than a dozen lawsuits have been filed on behalf of Flint residents who drank the lead-tainted water for nearly two years. Some of the suits seek to hold Michigan Governor Rick Snyder and others personally liable for the damages with some defendants facing criminal charges. Snyder has hired a criminal defense attorney retained to serve as "investigatory counsel.”

A new report suggests the overall cost for replacing the pipes and handling the lawsuits may exceed $300 billion.

Flint in the 2016 Race for President

Tomorrow night, the two remaining Democratic presidential hopefuls will participate in a debate in Flint where they are both expected to show empathy for the city’s citizens and blast Snyder, Michigan’s Republican governor.

© Sputnik / Yakov Andreev
Flint vs. the Political Establishment: Michigan’s Water Crisis
During a speech following her Super Tuesday electoral success last week, Clinton took a shot at Snyder saying “our city’s children were poisoned by toxic water because their governor wanted to save a little money.”

Clinton also went on the airwaves to discuss the issue.

“The idea that you would have a community in the United States of America of nearly 100,000 people who were drinking and bathing in lead-contaminated water infuriates me,” she told a national radio program.

However, some questions have arisen over how much polluting and poisoning America’s water supply Clinton really is.

Seventeen states filed joint lawsuits against the major producers of the compound, including ExxonMobil which became a major Clinton Foundation donor. By 2005, 21 states banned the use of MTBE prompting Clinton’s Democratic colleague, Senator Pete Domenici, to file legislation to phaseout its use nationally.

Clinton joined 14 Republicans and 11 Democrats in voting against the measure though it ultimately passed the Senate. Critics justified their votes by saying it would encourage greater use of ethanol.

Whether Sanders brings this up in the debate is yet to be seen, as is whether the residents of Flint will ever get access to clean water.

Poisoned, at a Price: Flint Paid Highest Rate in the US for Toxic Water