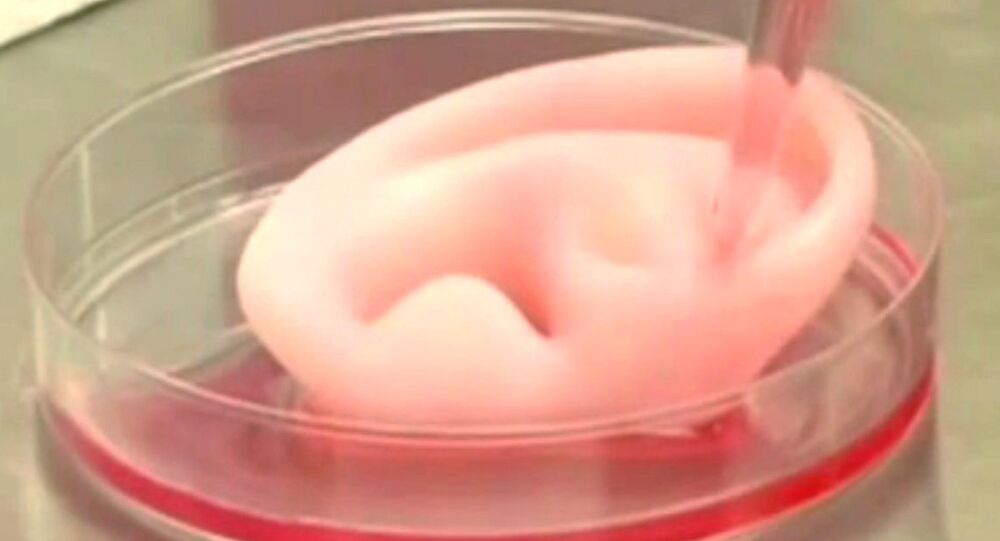 “We present an integrated tissue–organ printer (ITOP) that can fabricate stable, human-scale tissue constructs of any shape. The results of this study bring us closer to the reality of using 3D printing to repair defects using the patient’s own engineered tissue,” Dr. Anthony Atala from Wake Forest School of Medicine in North Carolina, told Reuters Health in an e-mail.

The correct shape of the tissue construct is achieved by representing clinical imaging data as a computer model of the anatomical defect and translating the model into a program that controls the motions of the printer nozzles, which dispense cells to discrete locations.

© Sputnik / Pavel Lisitsyn
Russia's Innovation Center 3D-Prints Thyroid for Mouse, Human Organs Could Be Next
His team developed a process they call “the integrated tissue and organ printing system,” which produces a network of tiny channels that allows the printed tissue to be nourished after being implanted into a living animal.

The incorporation of microchannels into the tissue constructs helps overcome the diffusion limit of 100–200 μm for cell survival in engineered tissues.

The polymer template eventually dissolves and is replaced by a viable organ.

As a demonstration, the research team used stem cells to “grow” a human jawbone and also “printed” a full-size human ear, which looks like normal cartilage under a microscope, with blood vessels supplying the outer regions and no circulation in the inner regions (as in native cartilage).

Both were then implanted into living mice, were not rejected and, covered with blood vessels, eventually became part of the animal’s system.

This groundbreaking new method is not yet ready for clinical use, but its authors are sure that it won’t be long before it becomes widely applied in regenerative medicine.