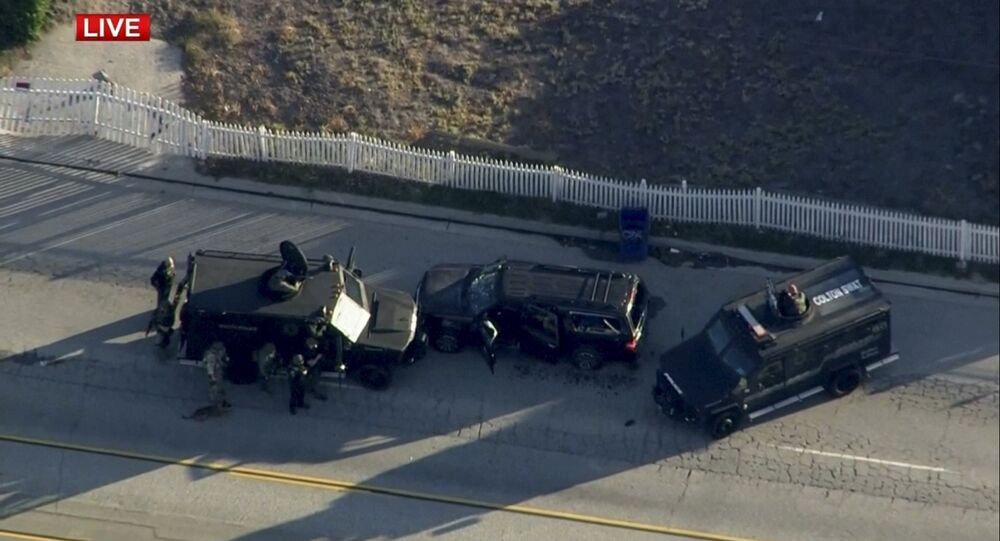 Two suspects are down, with a third apprehended, during the manhunt for the shooters responsible for killing 14 people and wounding another 17 in San Bernardino, California, on Wednesday.

Police confirm that two suspects have been "dealt with," though one may still be on the run. Police confirm that two suspects are dead, one male, the other female, and that both were armed with assault rifles and handguns. These individuals were inside the black SUV. A third individual ran from the scene. Police have detained that individual, who remains unidentified, though it remains unclear if that person was involved in the shooting.

One of the suspects in the shooting has been identified as US citizen Syed Farook, MSNBC reports citing unnamed law enforcement officials.

"There is some connection between that name and the house they [police] are searching in Redlands, California, which is about 70 miles from LA, about 10 miles from San Bernardino," MSNBC said.

NBC reported citing unnamed sources that another suspect in the Wednesday shooting is believed to be Farook’s brother.

Police feel confident that local area is now secure, but authorities are still trying to identify if other individuals may have been involved.

Police have also issued a search warrant for a home in nearby Redlands, California, which is in connection with the San Bernardino shooting, after receiving a tip. This led to a chase with the black SUV.

A spokeswoman for Loma Linda University Medical Center said the hospital remains on high alert. Five patients are being treated, two of which remain in critical condition, though she could not confirm if a police officer was one of the patients being treated. The hospital is not expecting any additional patients related to the shooting.

The hospital also received a bomb threat, according to the spokeswoman.

A police spokesman confirmed that one of the devices found inside the facility on Wednesday does appear to be an explosive.

The black SUV was stopped earlier on Wednesday. The drivers-side, passenger-side, and rear windows of the suspect vehicle were broken, though the cause for that damage is unknown. Suspects reportedly threw pipe bombs from the vehicle during pursuit.

The suspect vehicle was pinned between a pair of armored police vehicles, as police approached the black SUV inside a heavily armored, mobile shield.

According to witnesses, police exchanged heavy gunfire with the suspects after the vehicle was stopped.

According to a police spokeswoman, one officer was also wounded during the exchange.

In light of the shooting, flights coming into San Bernardino International Airport have been rerouted.

"There is a temporary flight restriction in place immediately west of the airport and that is impacting flights," said Mark Gibbs, the director of aviation for the airport, according to the Washington Post.

Earlier on Wednesday, police responded to three gunmen who stormed a developmental disability facility and opened fire. At least 14 are dead, with another 17 injured. The suspects escaped in a black SUV.

"These people came prepared to do what they did as if they were on a mission," San Bernardino Police Chief Jarrod Burguan told reporters earlier.

A motive for the shooting is not known at this time.