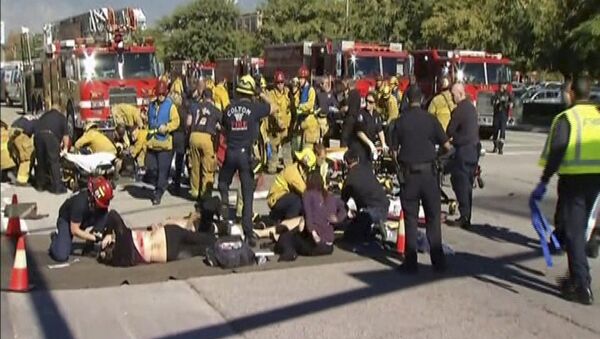 © REUTERS / NBCLA.com
Subscribe
Authorities in San Bernardino, California responded to an active shooter situation involving three gunmen which resulted in multiple casualties. There are also reports of police responding to an explosive device. The suspects remain at large after fleeing the scene in a vehicle.

Tthe suspects fled the scene. Multiple witnesses reported seeing three men with long rifles flee in a black Yukon SUV. Police are now searching for the vehicle. According to a San Bernardino police spokeswoman, "We have suspects at large, but we have absolutely no idea where they are."

San Bernardino police chief Jarrod Burguan confirms that up to three gunmen entered the building. At this time, at least 14 are dead and at least another 14 injured. More dead and wounded may still be inside the building. Speaking to reporters, Burguan also stressed that police have not identified the suspects at this time, and the motive for the shooting is not known. 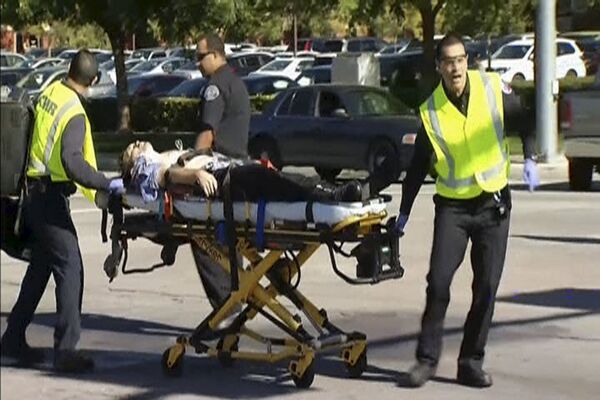 Still from video shows rescue crews tending to the injured in the intersection outside the Inland Regional Center in San Bernardino
© REUTERS / NBCLA.com

Bomb technicians are checking suspicious items inside the building.

He also confirmed that most of the victims appear to have been located in one area of the facility, and that he has no information on whether children were involved.

Authorities believe the attack to have been premeditated, and the gunmen used long rifles.

Sheriff John McMahon told reporters that he is working with local authorities. There is also an increased police presence at all high-profile locations in the area, including hospitals.

Assistant Director of the FBI David Bowdich says his team is working to determine whether the incident is terrorism. 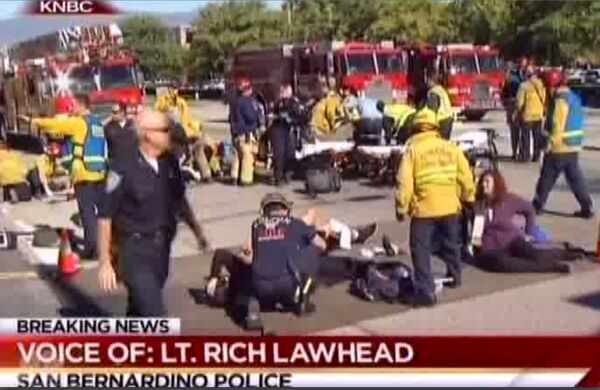 Burguan said that "no information this is terrorist-related in the traditional sense of the word, but obviously, at minimum, we have a domestic terrorism situation."

"They came prepared to do what they did…as if they were on a mission," he added.

Authorities confirmed that the Inland Regional Center is the only active crime scene.

According to police, the incident took place in a conference room at the Inland Regional Center, a non-profit that assists people with developmental disabilities, and was hosting a banquet for county employees when gunmen dressed in "military style" gear burst in. The gunmen were heavily armed, reportedly with AK-47-type rifles, and police say the suspects may be wearing body armor and possibly gas masks.

A local law enforcement source also tells CBS News that the bomb squad is attempting to neutralize what appears to be an explosive device that was found on the second floor. Bomb squad units are attempting to dispose of the device robotically.

Mayor Carey Davis told CNN that the city is on heightened alert. Multiple locations across the city have also been put on lockdown, including schools and government buildings. Trains have been halted and the police are moving to a nearby mall. 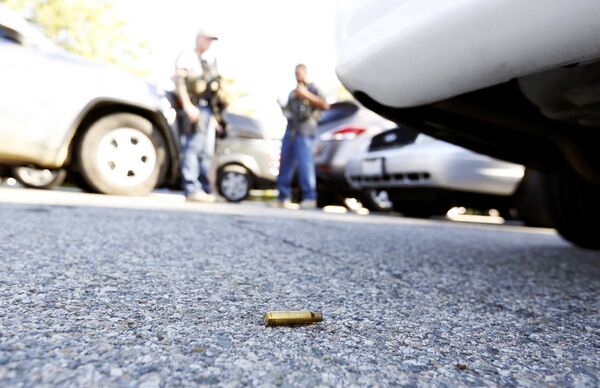 A spent cartrdige lies on the ground as police officers secure the area after at least one person opened fire at a social services agency in San Bernardino.
© REUTERS / Mario Anzuoni

The FBI and ATF are assisting local police, and a nearby golf course is being used to protect witnesses who escaped the center. Police also say that a local park and the nearby Hernandez Center are being used take people in and reunited them with loved ones.

According to the director of the IRC, the incident began when someone pulled the fire alarm and told staffers to stay behind locked doors as they moved for the exits.

A spokeswoman from Loma Linda Medical Center told Reuters the hospital is in "disaster mode" and waiting to receive an influx of patients.

"We're all kind of on standby right now — it could be any minute," spokeswoman Briana Pastorino said. Local media reports that 20 ambulances just left the scene of the incident.

One of the region's busiest hospitals, Arrowhead Regional, has also taken in 8 victims and is reportedly on lockdown itself.

While early reports suggested the incident may be related to Planned Parenthood, the nearest clinic has confirmed to CNBC that it is not the location of the shooting.

Witnesses say they employees were barricaded inside their offices until they were rescued by SWAT teams, who then escorted them outside.

According to CBS, the White House says that President Obama has been briefed by Homeland Security adviser Lisa Monaco, and has asked for regular updates on the situation. The president has called for every level of government to come together to work toward a bipartisan solution for curbing gun violence.

"We don't yet know what the motives of the shooters are, but what we do know is there are steps we can take to make Americans safer and that we should come together in a bipartisan basis at every level of government to make these rare as opposed to normal," he told CBS News.

"We should never think that this is something that just happens in the ordinary course of events, because it doesn't happen with the same frequency in other countries." 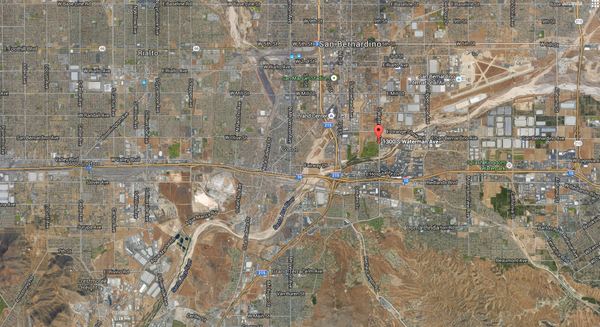 The Inland Regional Center serves over 31,000 people and employs nearly 670 individuals. According to an employee speaking to CNN, approximately 550 employees were inside the building at the time of the shooting. There are three buildings on the complex, which is one of the state's largest centers of its kind. The center had celebrated a holiday party only one day before the shooting.

Authorities say that the shooting is unrelated to a separate situation that occurred in Pasedena.

000000
Popular comments
Rest in peace all the deceased ,may he the almighty judge your souls fairly