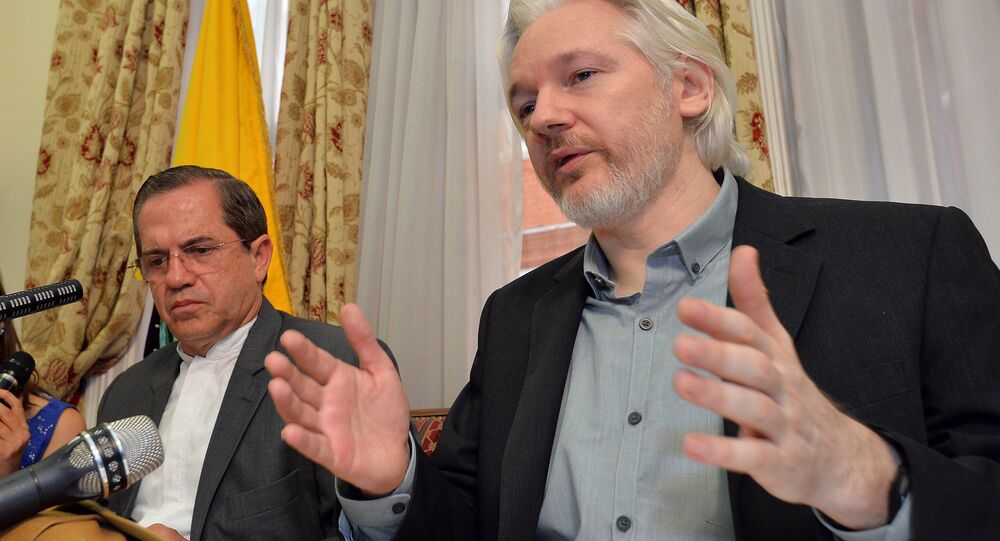 Assange: US Waging 'Lawfare' in Bid to Control the World

WikiLeaks founder Julian Assange has accused the US of trying to universally apply its own laws and control other countries as part of a practice of "lawfare" - seen through Washington's pursuit of people like himself, Edward Snowden and Kim Dotcom.

In an interview with Radio NZ, Assange explained the academic concept of "lawfare", which describes how one state can technically acquire territory and exert influence over others by applying its own laws in overseas countries.

The concept explains that intricate legal developments are used as a substitute to a military occupation in order for countries like the US to control certain decisions and outcomes in overseas states.

The WikiLeaks chief said the US investigation of himself and others involved in leaking sensitive government information is a prime example of Washington engaging in lawfare, which is enabled through a series of international institutions and agreements like the TPP, as well as the cooperation of allied states not willing to question and stand up to the US.

"I'm an Australian, Why Is the US Investigating Me for Espionage?"

Assange said that due to a striking set of similarities between the US investigation into his actions, as well as those of NSA whistleblower Edward Snowden and internet entrepreneur Kim Dotcom, there is proof that the US is engaging in 'lawfare' to try and apply its laws to overseas territories.

I never lived there I never traveled there I had no company there But all I worked for now belongs to the U.S. https://t.co/l3B0Cuj0tr

"There's a commonality I'd like to bring up, which is Edward Snowden, I and Kim Dotcom — our cases are all in Alexandria, Virginia, where we have the same prosecutor," he told Radio NZ, arguing that he shouldn't be under investigation by US officials at all.

"It's something quite interesting. Alexandria, Virginia, is picked in all national security cases. Now, I'm an Australian. WikiLeaks is not a US-publishing organization… So, what the hell is the United States doing trying to bring an espionage case against me?"

"Well, you can ask yourself a similar question about what is it trying to do in relation to extraditing Kim Dotcom from New Zealand and his Hong Kong operation," Assange said.

Assange on what the #TPP means for the EU, BRICS and the world https://t.co/gqyWldsWbJ More: https://t.co/YX4s2itBcZ #TTIP #TAFTA

The 44-year-old argued that the particular prosecutor assigned to all three cases is used due to the high concentration of US government and security influence in the area.

"That jurisdiction is simply picked because it has the highest density of government employees: it's five kilometers from the center of Washington DC, it has CIA, DHS, the IRS etc. within the… area, and the US brags that Alexandria, Virginia, is involved in pushing US law into more than 67 different jurisdictions.

"This is something in academia… called 'lawfare' — getting access to territory by pushing your laws into this territory, instead of your military. It's a very modern and sophisticated concept, and that's partly what the TPP is about."

For the US to try and exert its laws onto other countries, Assange argues that various international institutions, such as the International Criminal Court (ICC) — which the US is not a member of — are being tweaked as part of the 'lawfare' process.

Noting that attempts have been made to create loopholes for the US figures to escape any potential punishment, Assange said:

"It's very interesting to look at the ICC as an example of how the US interfaces with the international situation."

Assange said the US was going to "most countries in the world, trying to get them to sign secret bilateral agreements — called Article 98 agreements — to promise that those countries would never extradite someone from the US government to the International Criminal Court."

It's thought that the US has concluded at least 100 of these agreements.

While under the Bush administration these loopholes were initiated to protect government officials from prosecution due to events in Iraq, Assange says that under President Obama, there has been "an attempt to co-opt the ICC for broader geopolitical purposes, as opposed to the narrow view of trying to protect their own skins."

Huge international trade deals such as the recently concluded TPP and the proposed TTIP have also been accused of being central to the US plans to exert legal influence over the world.

A clause in these deals allows multinational organizations to sue governments if legislation is introduced that will inhibit the investment opportunities of businesses.

Critics have argued that such initiatives actively undermine the sovereignty of governments involved in the trade deals, thus allowing large multinational corporations to assert legal control and influence over foreign states.