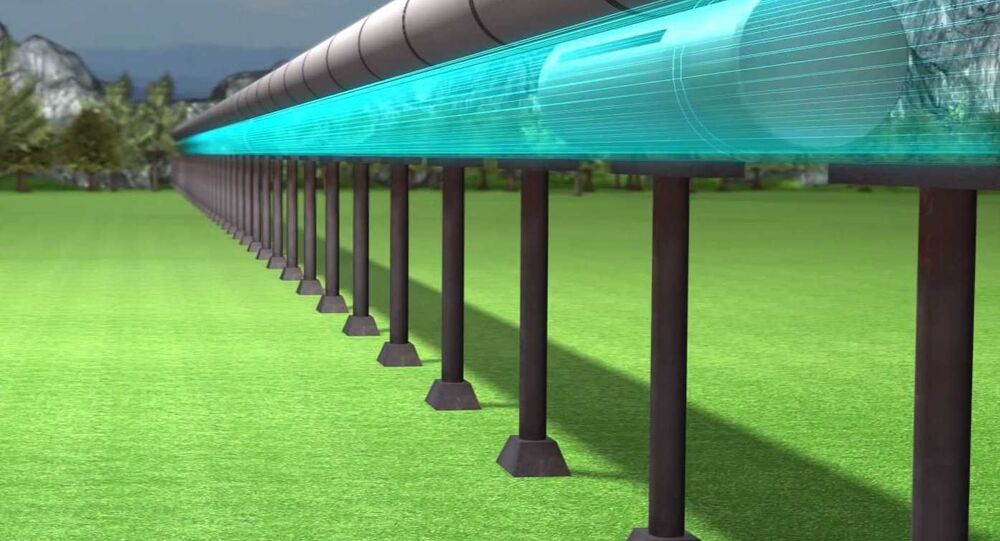 The Hyperloop, the supersonic railway of the future, is due to break ground May 2016. The company leading the project announced on Thursday that the first five miles of test track will be built in California.

Capsules inside tubes will launch people from one big city to another using low air pressure at supersonic speeds exceeding 750 mph (1,200 km/h). Those high speeds will be achieved with a system of magnets and fans, allowing the pods to rest on a cushion of air. And the entire infrastructure will be powered by environmentally friendly solar panels.

Sound like sci-fi? Not anymore. The Hyperloop, brainchild of SpaceX and Tesla founder Elon Musk, now has several companies pushing the development forward.
Hyperloop Transportation Technologies (HTT) is one of several companies developing Hyperloop technology. One of the largest startup companies in the world, HTT announced on Thursday that it plans to team up with Swiss technology company Oerlikon and the world’s largest construction engineering firm, AECOM. They will also be joined by design studio Hodgetts+Fung.

Oerlikon has been working with vacuum technologies for more than a century, and took part in building the Large Hadron Collider. It sees the lofty vision of the Hyperloop as realistic.

“I don’t think the construction hurdles are significant compared to other technologies that are already out there,” said Carl Brockmeyer, Oerlikon’s head of business development, according to Wired. “From a technical point of view, it’s not a challenge. We are used to much higher and harsher applications.”

HTT also announced it will begin construction on a 5-mile testing rail for the Hyperloop in Quay Valley, just north of Los Angeles, by May of next year. To test the pods at longer distances, HTT eventually plans to build facilities in Asia or Africa, where it is easier to secure land for construction, according to Hyperloop CEO Dirk Ahlborn said.

© Flickr / oooOOC
SpaceX to Build Hyperloop Prototype for 760 Miles Per Hour Travel
The futuristic transport, ambitiously described by Musk as being an entirely new mode of transportation, now has a team of more than 400 members, each working within his or her own sphere of expertise.

And no one, including the CEO, is getting paid for the job.

Instead, Hyperloop developers work on the project for at least 10 hours per week during their spare time. But people don’t work for nothing – if all goes according to plan, they’ll receive Hyperloop stock in exchange for completing the job.

#westchester Elon Musk's new venture is the Hyperloop and I'm thrilled to be working on it in Westch. NY- Bost in 35m pic.twitter.com/Ppsypz6ikk

Magnetically levitated trains are currently in operation in Shanghai and Tokyo, and can travel at a speed of 310 mph (500 km/h). While these trains use magnets to produce lift and propulsion, the Hyperloop would rely on compressed air for lift and magnets for propulsion.

In theory, Hyperloop capsules could reach blistering speeds, far outpacing current modes of commercial transport, since their enclosure within the tube would make them immune to air resistance.

© AFP 2020 / Toru YAMANAKA
Maglev Train Battle: Japan Breaks Speed Record, China Eyes Further
On the other hand, the Hyperloop is vulnerable to one major flaw. If the walls of the tubes are not straight, or if the vacuum in the tube is compromised, then a crash is inevitable, experts estimate. Reliance on the compressor of individual pods is also a big deal. If the compressor fails, the capsule will crash into the walls.

It still remains unclear if the system will be as cheap as promised by its proponents. According to Hyperloop Transportation Technologies’ estimates, the five-mile test track will cost approximately $100 million. A proposed 400-mile track between Los Angeles and San Francisco would cost an estimated $8 billion.

However, since the track must be built to precise measurements, that cost will inevitably climb higher, analysts predict.