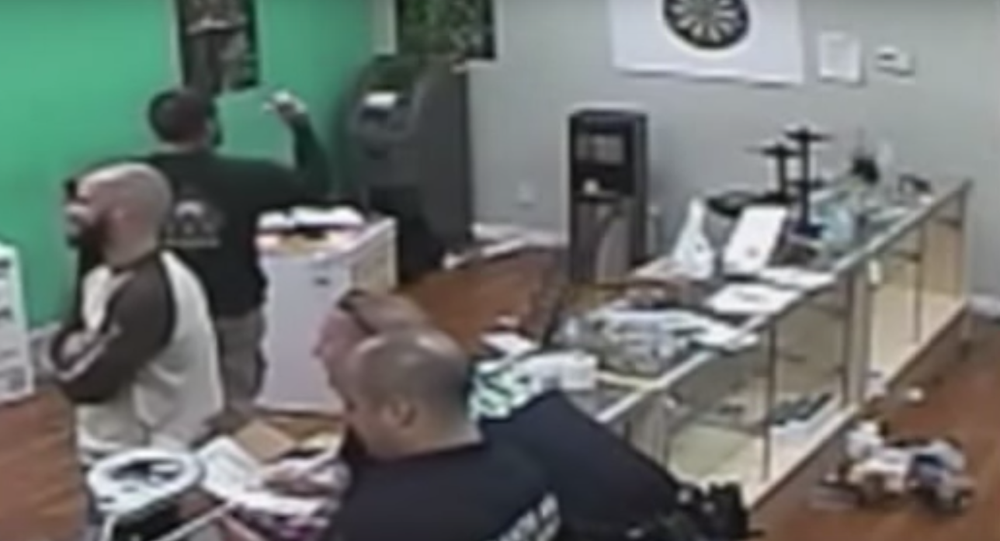 A lawsuit was filed last week by three Santa Ana police officers who were caught on surveillance camera mocking a disabled woman in a wheelchair and seemingly snacking on edibles during a marijuana dispensary raid. They’re seeking to suppress the potentially incriminating video.

© AP Photo / Susan Walsh
Unarmed South Carolina Teen Shot in Back by Cops During Marijuana Raid
The lawsuit, filed in Orange County Superior Court, claims that the video of the May 26 raid was altered to make the officers look bad before it was released to the media.

Matthew Pappas, the lawyer for the marijuana dispensary, has pointed out the irony of police attempting to downplay video evidence, when it’s something they themselves rely on so heavily.

“It’s pretty pathetic for police to say if we don’t like something that it can’t be used as evidence,” Pappas told the OC Register.

The lawyer has provided the media as well as the department with both a highlight reel and the full unedited video.

In addition to mocking a disabled woman, the officers, some of whom are seen wearing ski masks, play darts and comment on the flavors of products at the dispensary.

“Did you punch that one-legged old Bonita,” a male officer asks a female officer, referring to a woman who was in the building when the officers bust in.

“I was about to kick her in her (expletive) nub,” the female officer replies in the video.

An officer also appears to dismantle video cameras before they all let loose.

“All police personnel present had a reasonable expectation that their conversations were no longer being recorded and the undercover officers, feeling that they were safe to do so, removed their masks,” the lawsuit states, claiming that the dispensary did not have permission from the officers to use their surveillance cameras during the unexpected raid.

The suit argues that without “illegal recordings” there would be no grounds to investigate the officers, and therefore the charges should be dropped.

“They knew they were on video…. Just because they missed one camera doesn’t make it illegal,” Pappas argued.

All of the officers remain employed with the department, and a hearing for the case has not been set.