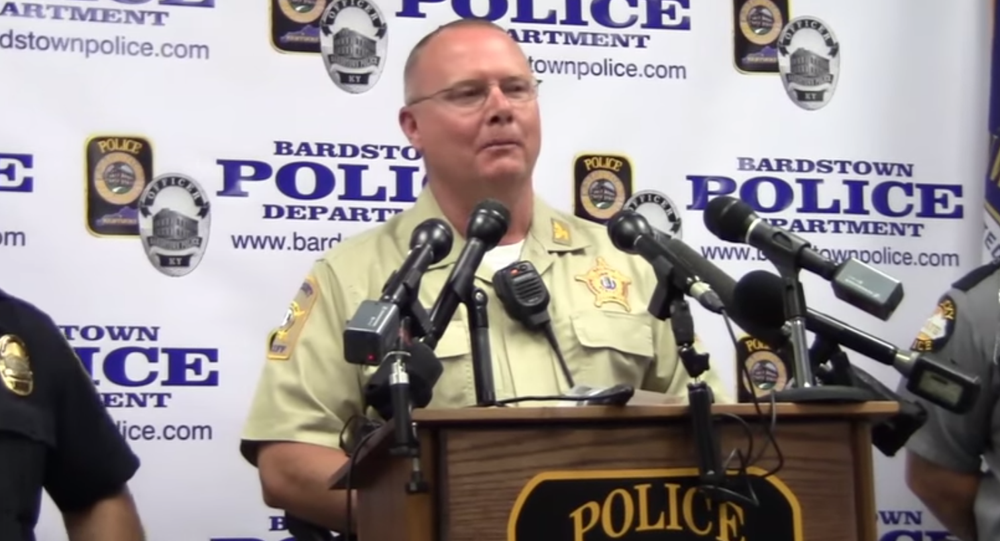 Police in Bardstown held a news conference to discuss an incident that led to their shooting of 25-year-old John Kennedy Fenwick on Sunday. When asked if the department was concerned about backlash from the community, the officer stated that they’re glad the guy that they shot was white.

"We do not want trouble. We are glad that he is white, and we shouldn't have to be worried about that," Nelson County Sheriff Ed Mattingly said. "And we do not want any backlash or violence in this community because people have been misinformed. I think that the public needs to know how the criminal justice system works and… what officers are able to do."

But even prior to the inflammatory comment, it seemed unlikely that they would receive too much backlash.

The statements regarding Fenwick's race begin around the 12:30 mark.

The shooting occurred after an intense car chase that left a trail of mangled officers and police vehicles.  Fenwick was driving a stolen vehicle as an officer attempted to pull him over for an illegal turn.  The red pickup truck had been stolen from a dealership earlier that morning, but the officers did not know that at the time.

"Just up the road, he encountered a Nelson County deputy sheriff," Police Chief Rick McCubbin said. "He struck that vehicle at an intentional high rate of speed, with such speed that that vehicle immediately burst into flames. The deputy was able to get out of that vehicle. The vehicle then fled that scene."

Eventually, another officer was able to remove Fenwick from his vehicle, but he claims Fenwick attempted to disarm him and that is when he fired at the 25-year-old man.  Fenwick was airlifted to an emergency room in critical condition.  He is expected to survive his injuries.

His family has retained a lawyer, and they claim to have contacted authorities for help getting him a mental evaluation over the weekend, explaining that Fenwick has a medical condition and that this incident has far more to do with deteriorating health than Fenwick being a violent criminal.

“His family can confirm that they had been in contact with law enforcement throughout the weekend asking for help for their son. Unfortunately, the system does not accommodate these situations very well, and his family was told that nothing could be done until Monday morning. Mr. Fenwick's condition continued to deteriorate to the point where this occurred.

I cannot go into details about his medical condition, but suffice it to say that he was suffering from a condition and the authorities were made aware of this by his family. There is no evidence of the involvement of illegal drug use as may have been referenced in some earlier reports,” a statement from the family’s lawyer reads.

The officers’ remarks come at a time when racism within US law enforcement agencies is in the global spotlight, as a black male teenager aged 15-19 is 21 times more likely to be killed by police than a white male between the same ages.

Federal data from 2010-2012 show that black teens were killed at a rate of 31.17 per million, while just 1.47 per million white males in that age range died at the hands of police, ProPublica reported.

Instead of acknowledging these disparities, Sheriff Mattingly put the blame on the media.

"We must take notice of previous cases and how the media has handled those situations. We want the public to be informed and accurately informed. We do not want trouble, the media has not done a very good job of informing the public, and the public is not educated on how the system actually works," Mattingly stated.

At the time of publication, there have been 422 people killed by police in the United States in 2015.

Hundreds March in Wisconsin Over Non-Indictment of Police Officer