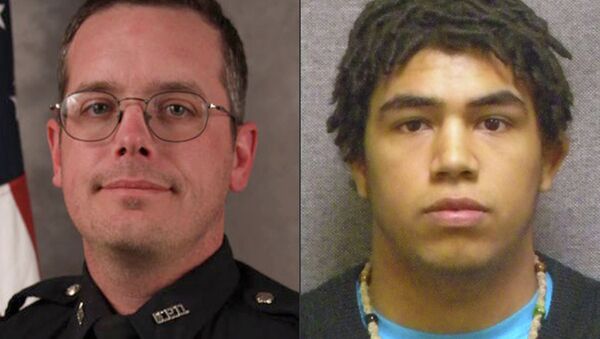 © Madison Police Department
Subscribe
Prosecutors in Wisconsin announced Tuesday that they will not press charges against the white Madison police officer who shot and killed a biracial teenager in March.

Protests and vigils have already begun in the wake of the announcement that officer Matthew Kenny, 45, will face no charges in the death of 19-year-old Tony Robinson, who he shot and killed on March 6.

Dane County District Attorney Ismael Ozanne announced the decision not to pursue charges, calling the shooting a "lawful use of deadly police force."

"When we use violence to control, we do so at tremendous cost," said Ozanne, who is biracial himself, at a moment when the use of force by police officers against young black men is under intense scrutiny across the country.

"I am a man who understands the pain of unjustified profiling," Ozanne continued, adding that he was also "cognizant of the very real disparities and issues that exist" in Dane County.

According to police, the day of the incident, they were responding to multiple complaints that Robinson had been causing a disturbance and running into traffic. Officers said that "a struggle ensued" when they encountered Robinson, during which he was shot multiple times and killed.

The toxicology report on Robinson found Xanax, marijuana and psilocybin (mushrooms) in his blood.

"My decision is not based on emotion," Ozanne said. "Rather, this decision is based on the facts as they have been investigated and reported to me. This decision is guided by the law, and the oath I took to uphold the Constitution."

Following the incident, as many as 1,500 people took to the streets and demanded Kenny's arrest.

Kenny was also involved in a fatal shooting in 2007, when he shot and killed a 48-year old man who was waving a realistic looking pellet gun, in what was labelled a "suicide-by-cop" incident.