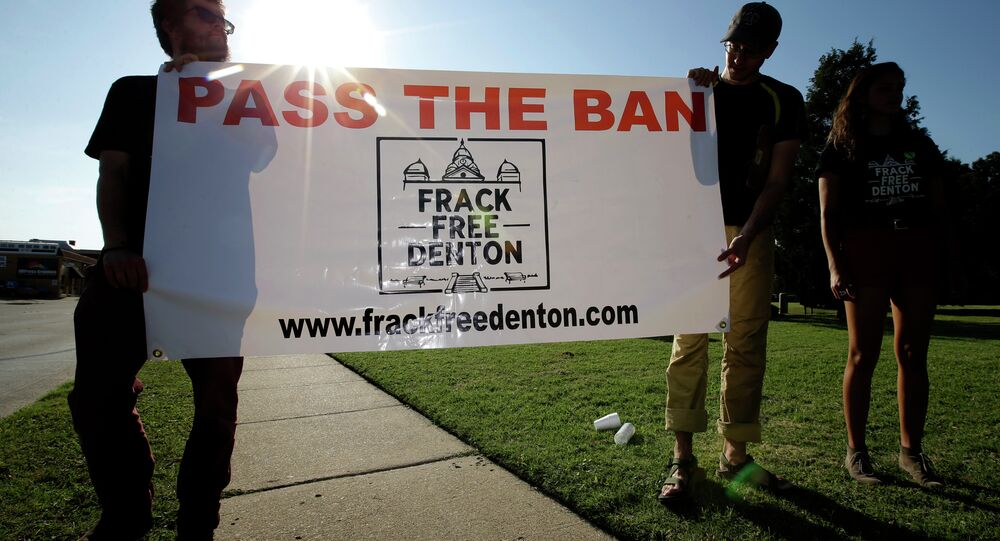 Four anti-fracking organizations said that a bill in the US state of Texas legislature meant to overturn municipal oil and gas hydraulic fracturing ban in Denton, Texas, passed the Energy Committee on Monday is an affront to local government.

WASHINGTON (Sputnik) — A bill in the US state of Texas legislature meant to overturn municipal oil and gas hydraulic fracturing ban in Denton, Texas, passed the Energy Committee on Monday is an affront to local government, four anti-fracking organizations said in a joint statement.

“In the past, towns have been able to decide for themselves whether they wanted drilling operations next to homes, day care centers, churches, or hospitals,” Denton Drilling Awareness Group President Cathy McMullen, one of the four organizations, said in the statement on Monday.

“Not anymore. Politicians in Austin think they know better than us what’s good for our towns,” McMullen added.

Earthworks, Earth Justice and the Natural Resources Defense Council are the other three organizations that joined in seeking to uphold the fracking ban.

The city of Denton sits on the massive Barnett Shale where the practice of hydraulic fracturing was first perfected.

In early November 2014, the city's residents passed by a six-to-four margin a ban on fracking within the city's limits.

“It looks like the Texas House Energy Resources Committee does not want the case to reach the court,” Earth Justice attorney Deborah Goldberg said.

“The Committee has taken matters into their own hands, capitulating to the greedy but powerful oil and gas industry at the expense of their own constituents’ health and well-being,” Goldberg added.

The bill passed on Monday reverses the results of the election in Denton, but also challenges long-standing city rights to pass oil and gas ordinances, according to the defenders of the municipal ban.

“Our state legislators talk a good game when it comes to cracking down on ‘big government,’ but this law flies in the face of everything they supposedly believe,” Earthworks organizer Sharon Wilson said.

“The politicians in Austin just told every town in Texas, ‘we know better than you what’s right for your town.’ And all because the oil and gas industry got mad that people in Denton decided to stand up for themselves,” Wilson explained.

The bill, if passed by the Texas legislature, would give the state authorities the power over local ordinances to limit or prohibit fracking.

Many cities and towns in Texas have setback clauses, requiring oil and gas rigs to be a certain distance from residential or community buildings. As is stands, the bill would maintain municipal ordinances older than five years, but would prohibit recent bans as voted on in Denton.