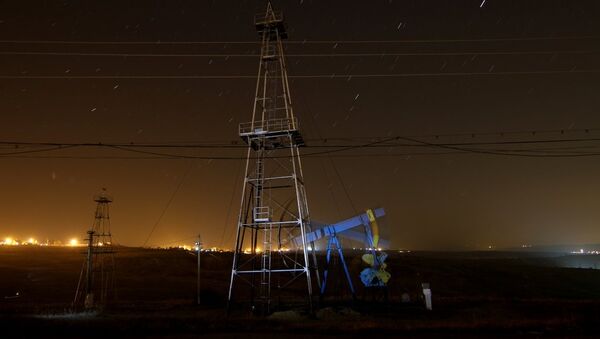 © Flickr / leonwpp
Subscribe
Fracking could contaminate drinking water in Europe and cause severe environmental damage, according to the study by the Berlin-based Energy Watch Group.

PACE Delegates Sign Motion Imposing Moratorium on Fracking in Europe
MOSCOW (Sputnik) — The environmental impact of the shale gas extraction in Europe is disproportionate to the raw materials gained by hydraulic fracturing, also known as fracking, a new study said.

Fraking is a drilling technology, which involves pumping a highly-toxic mix of chemicals into the ground at high pressure to break up rocks and release natural gas and crude oil. It has been surrounded with controversy amid evidence that it pollutes ground water and causes shifts in the crust.

In ten years, fracking could contaminate drinking water in Europe and cause severe environmental damage, the study by the Berlin-based Energy Watch Group said, as cited by EurActiv media outlet on Friday.

"We should not compare the conditions in Germany with those in the United States," Werner Zittel, the author of the study stressed.

Out of Proportion: UK Energy Secretary Admits Fracking Has Been Hyped
Zittel explained that Germany is much more densely populated than the United States. This increases risks for both the environment and people health near fracking sites, he said.

The study confirmed that fracking increases the danger of earthquakes in the United States, where fracking is already widely used. The authors of the study also questioned cost-effectiveness of the controversial extraction method.

The study comes a month after Berlin proposed a draft law to legalize commercial shale gas fracking, which is under ban now. The vote is set to be held in May.

Germany is estimated to have up to 2.3 trillion cubic meters of shale gas reserves. If fracking is allowed, Germany could become less dependent on energy supplies from Russia and would be more competitive with the United States in securing energy supplies.