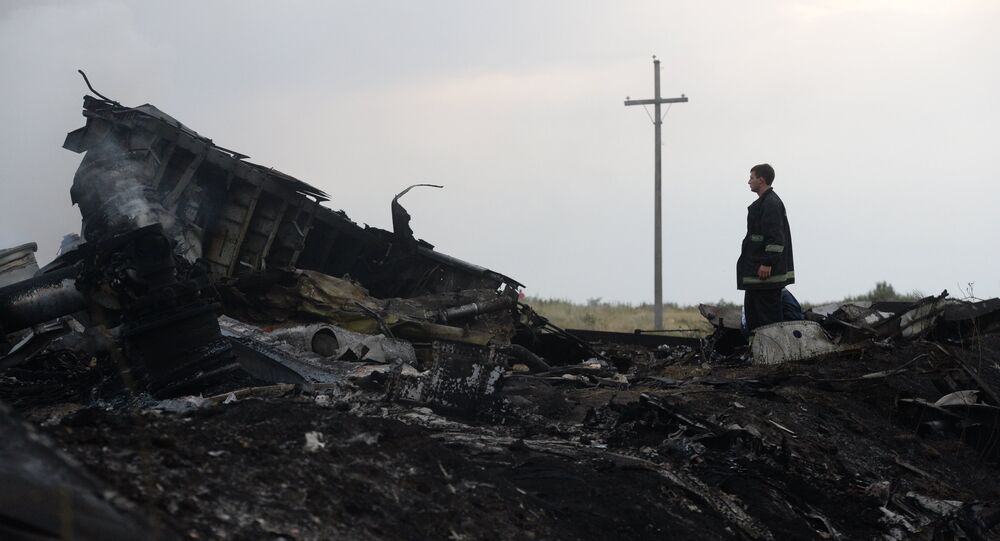 The US prefers to conceal the truth about the crash of Malaysia Airlines Flight 17, since it could undermine Washington's narrative and ultimately obliterate its "the Russia-did-it scenario," says a US journalist.

© Sputnik / Masha Ross
International Team Completes Investigation Meeting Into MH17 Crash
Although the US possesses the most expensive and sophisticated intelligence system in the world, it has not yet refined its initial assessment of Malaysia's MH17 crash publicized on July 22, 2014.

According to Robert Perry, an American investigative journalist, the US prefers to conceal the truth about the Malaysia Airlines Flight 17 tragedy, since it could undermine Washington's political position and obliterate its "the Russia-did-it scenario." The journalist pointed out that although the US intelligence community had time to review the data from satellites, phone intercepts and other sources, it has not yet updated its old report released on July 22, 2014, that put the blame for the crash on Russia and the militia in eastern Ukraine.

"This strange behavior reinforces the suspicion that the US government possesses information that contradicts its initial rush to judgment, but senior officials don't want to correct the record because to do so would embarrass them and weaken the value of the tragedy as a propaganda club to pound the Russians," Robert Perry emphasized.

© REUTERS / Maxim Shemetov
Final Report on MH17 Crash Expected by October 2015 – Dutch Official
Indeed, in July 2014, the crash of the MH17 Flight immediately became an instrument of large-scale anti-Russian propaganda. Western officials and mass media sources pointed their accusing finger at Russia and personally at its President, Vladimir Putin, providing no evidence supporting their accusations. The campaign resulted in American and European sanctions against Russia as well as aggravated further tensions in Ukraine. However, after the Western propaganda campaign reached its goal and doubts regarding Russia's role in the tragedy emerged, Washington went suspiciously silent.

Interestingly enough, despite the US intelligence report was blaming Russians for the crash it did not claim that Russia provided eastern Ukraine independence supporters with Buk (or SA-11) surface-to air missiles, and admitted it was unable to determine exactly the nationalities or identities of servicemen that launched the missile.

When Russia's military provided their radar readings indicating Ukraine's Buk systems activity in eastern Ukraine on the day of tragedy as well as the presence of a Ukrainian jetfighter within three to five kilometers of MH17 before the crash, the Obama administration remained silent and did not released any evidence or satellite imagery supporting Washington's version.

© REUTERS / Antonio Bronic
Australian FM Insists No Amnesty for Guilty of MH17 Crash
Robert Perry emphasized that in August 2014 "US intelligence analysts had begun shifting away from the original scenario blaming Russia to one focused more on the possibility that extremist elements of the Ukrainian government were responsible, funded by one of Ukraine's rabidly anti-Russian oligarchs."

Meanwhile, the Dutch Safety Board investigating the tragedy has not shed much light on the catastrophe, just confirming in mid-October that the Malaysian plane was apparently destroyed by "high-velocity objects that penetrated the aircraft from outside." Curiously enough, the 34-page Dutch report did not raise the question whether the United States obtained satellite surveillance that could reveal exactly where and when the deadly missile was launched.

While the dangerous conflict over Ukraine between Russia and the United States, the two nuclear-armed nations, continues escalating, the US intelligence community, which possesses the most expensive and sophisticated surveillance system is doing nothing to refine the US's initial assessment of the MH17 shoot-down, the journalist stressed.

Malaysia Airlines Flight 17 an international passenger flight heading to Kuala Lumpur from Amsterdam crashed on July 17, 2014 after being shot down claiming lives of 283 passengers and 15 crew members on board near Torez, in Donetsk region, Ukraine.

Colossal Cover Up? Searching For Truth Amid MH17 Tragedy