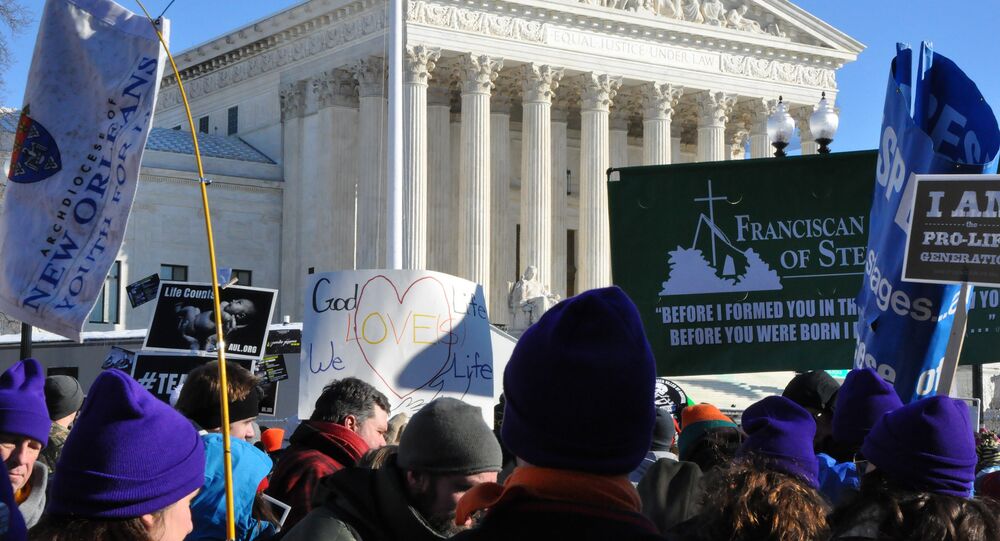 Congress Tries to Restrict Abortion as Thousands "March for Life" in D.C.

On the anniversary of Roe v. Wade, thousands of pro-life demonstrators are taking to the streets of Washington D.C. But a decision by Congressional Republicans may sour protesters’ enthusiasm.

While one controversial bill was taken off the floor, Republicans did manage to force an abortion bill through the House on Thursday. With the votes split along party lines, the new legislation would bar all federal funding for abortion coverage, and block tax credits which would help purchase insurance that covers abortions.

The White House has indicated it will block the bill, making the House's decision a largely symbolic gesture toward the protesters outside its doors.

Ever since the landmark 1973 Supreme Court decision granting women the right to choose, organizers have held the annual March for Life in the nation’s capital. The proceedings begin with a rally at the National Mall and continue along Constitution Avenue before ending on the steps of the Supreme Court.

The march of 2013 drew an estimated crowd of 650,000 people, and this year, the gathering has already amassed thousands.

This year, pro-life demonstrators had cause for hope. The Republican-controlled Congress had planned to debate a bill which would put an end to nearly all late-term abortions.

Dubbed the Pain-Capable Unborn Child Protection Act, the bill would ban abortions after 20 weeks of pregnancy, with a slim window of exemptions for victims of rape or incest.

Sponsored by Representative Trent Franks, the exemptions would have required any woman seeking an abortion after 20 weeks to have previously reported the incident.

Would have. Because Republicans have now decided not to pursue the legislation after several congresswoman from their own party, as well as all Democrats, said they would not approve such a drastic measure.

“The issue becomes, we’re questioning the woman’s word,” North Carolina Representative Renee Ellmers said in an interview. “We have to be compassionate to women when they’re in a crisis situation.”

“It’s so unpopular even their own members won’t support it,” Planned Parenthood tweeted.

President Obama said Tuesday he would veto the bill if it passed through Congress.

Tony Perkins, president of the Family Research Council, urged supporters to call Congress throughout the night, encouraging them to bring the bill back for a vote.