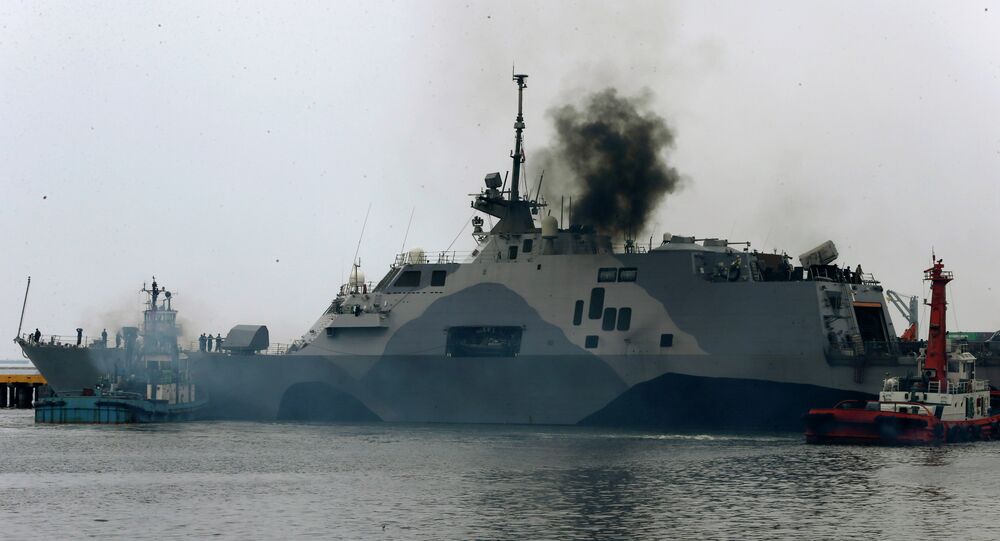 What was supposed to be the Pentagon’s maritime crown jewel isn’t looking so precious after all.

The $670 million Littoral Combat ship, that was supposed to be one of the fastest, the least detectable  and technologically advanced in the U.S. Navy, never passed inspection and was labeled a “non-survival boat in combat” by the Pentagon’s director of operational test and evaluation Michael Gilmore.

“Notwithstanding reductions to its susceptibility” compared with the design of the first 32 ships, “the minor modifications to the LCS will not yield a ship that is significantly more survivable,” said Gilmore.

The ship was commissioned in 2008 and was designed to be fast, maneuverable, capable of operating in shallow waters, and able to combat submarines, small ships, as well as participate in minesweeping, humanitarian relief and special forces operations.

Since day one, it has been tormented by design defects and failed equipment — problems that have proven impossible to fix.

After inspecting the ship in 2011, Gilmore issued a report saying it would not survive “in a hostile combat environment.”  The Navy attempted to correct the deficiencies, but the ship broke down several times and suffered minor flooding while on mission.

In May 2012, the Navy inspection report disclosed that the ship had failed 14 of 28 inspection tests, including an assessment of its fire-fighting systems, communications, electrical systems and forward propulsion.

The ship was still sent on missions abroad despite engine related failures.

During an annual inspection in 2013, Gilmore once again reported that the USS Freedom, the first LCS built by Lockheed Martin, was “not expected to be survivable” in combat.

The report cited that helicopters on board the ship could not read mine countermeasures, the ship’s guns were unreliable, vibrating at high speeds resulting in inaccurate firing, and the integrated weapons systems and air/surface search radar had “performance deficiencies” that affect the ship’s “tracking engagement of contacts.”

In December, Defense Secretary Chuck Hagel approved a plan to upgrade the Navy’s coastal vessel, and buy 20 additional ships after 2019, with upgrades to their armor, sensors and weapons.

When Hagel asked the Navy in January 2014 to prepare alternative proposals for a small combatant vessel “generally consistent with the capabilities of a frigate,” the Navy proposed spending an additional $75 million to further modify the failing ship, hoping it would become a “multimission ship capable of long-range attack, self-defense and the ability to perform either anti-submarine warfare of surface attack,” Chief of Naval Operations Admiral Jonathan Greenert said.

Gilmore, however, insisted that the changes Hagel accepted “do not satisfy significant elements” of a frigate’s capability that the task force examined, adding that “the combat capabilities and survivability of a frigate could be provided only by a new ship design or a major modification” to the existing blueprint.

Congress has appropriated about $12 billion so far for 20 vessels. The Navy plans to spend an additional $7.2 billion to buy modules to be swapped out for different missions, such as clearing mines and hunting submarines.

“There is inadequate information available to make a conclusion, but they are making a lot of claims that seem to overstretch,” Former Navy shipbuilding official Everett Pyatt told Bloomberg.

“I do not see how it is possible to make all these changes without a major redesign,” he said. “I have not seen anything that brings the ship up to the survivability level of a frigate.”

The LCS program isn’t the only Lockheed Martin creation that’s failed to satisfy expectations.  The Pentagon has spent decades and over $1.5 trillion on the F-35 Joint Strike Fighter: the fifth generation combat aircraft that still can’t fly in the rain and burns up when taking off, and engineers still can’t get its software to work.  Despite being the most expensive weapons program in Pentagon history, the F-35 has lately been restricted to lower speeds and three hours flying time, and the jet’s primary gun won’t be ready to install until at least 2019, despite the fact that the jet is expected to be on the front line sometime within months.