Hundreds of people came out over the weekend to show their support for a popular Pittsburgh eatery forced to shut its doors after receiving death threats for serving up Palestinian cuisine. Though it reopened for lunch on Wednesday, the real conflict, it seems, won’t go away anytime soon.

“After consultation with local law enforcement agencies, Conflict Kitchen will reopen Wednesday, November 12 and continue operating under our regular business hours from 11am-6pm, 7 days a week.  We greatly appreciate all of the incredible support that we have received during our closure, and we are eager to reopen our Palestinian iteration. The investigation on the threat that we received is ongoing.

The business, which began as a non-profit food-focused art project in 2010, announced Friday via Facebook that they had received a letter containing death threats, and that they would be ceasing operations until the credibility of the threats could be assessed by police.

© Sputnik
Locals show support for Conflict Kitchen, which has been closed since last week.

The threats were evidently in response to text the restaurant printed on food wrappers, which included interviews conducted by Conflict Kitchen with Palestinians on a variety of subjects:

“How can you compare Israeli F-16s, which are some of the best military planes in the world, to a few hundred homemade rockets?  You’re punishing the Gazans who have been under your siege for eight years already.  You’re attacking, arresting and killing guilty and innocent people alike… You’re pushing them to the absolute extreme.”

“Land confiscation and Israeli settler attacks happen every day.  Our experience is not unique.  But instead of violent resistance, or giving up and leaving, we’ve decided our resistance should reflect our Christian beliefs.  For this reason, we open our farm to Israelis and internationals so they can come and see what is happening here.  We refuse to be enemies.  We believe that education is more powerful than antagonism.”

“The Israeli settlements in the West Bank perform three key functions.  The first is territorial; it’s about fragmenting and isolating Palestinian communities.  The second is to control the distribution of resources.  Water, land and government services are taken away from Palestinians and given to Jewish settlers.  The third is surveillance.  In the Occupied Territories, all the settlements are on hills; this gives them a military advantage and lets the settlers watch the Palestinians.  If Palestinians cross boundaries to harvest olives, the settlers can see this and attack them.”

Conservative groups and media outlets have criticized the wrappers as conveying anti-Israel “propaganda”, citing in particular criticism of Israeli settlements in the West Bank.

Jewish service organization B’nai B’rith International, which had earlier criticized the Heinz Endowments organization for their financial support of Conflict Kitchen and their efforts to “demonize and delegitimize Israel”, said on their website that they condemn the threats.

“A death threat is no way to solve a dispute.  We urge the police to act quickly to find the perpetrators.”

Conflict Kitchen has defended the controversial food wrappers, stating that they contain multiple viewpoints and that the casting of them as anti-Israel “reinforce[s] the simplest, most polarizing, and dehumanizing reading of their lives and perpetuate[s] the silencing of their voices.”

The restaurant features rotating menus from areas of the world with which the U.S. is in conflict.  Past menus have included fare from Iran, Venezuela, Afghanistan, Cuba and North Korea. 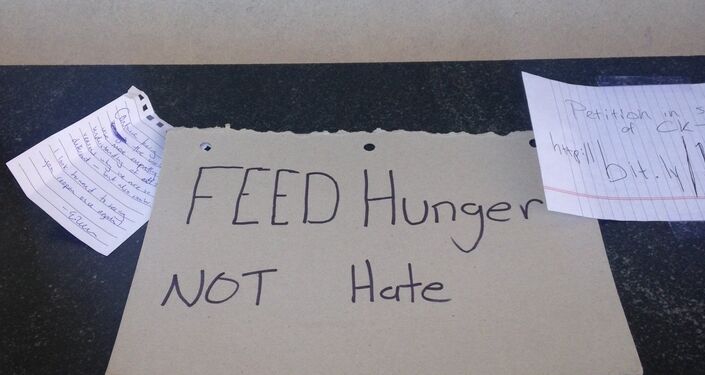 © Sputnik
Conflict Kitchen is a restaurant that only serves cuisine from countries with which the U.S. is in conflict.

According to its website, “each Conflict Kitchen iteration is augmented by events, performances, publications, and discussions that seek to expand the engagement the public has with the culture, politics, and issues at stake within the focus region.”