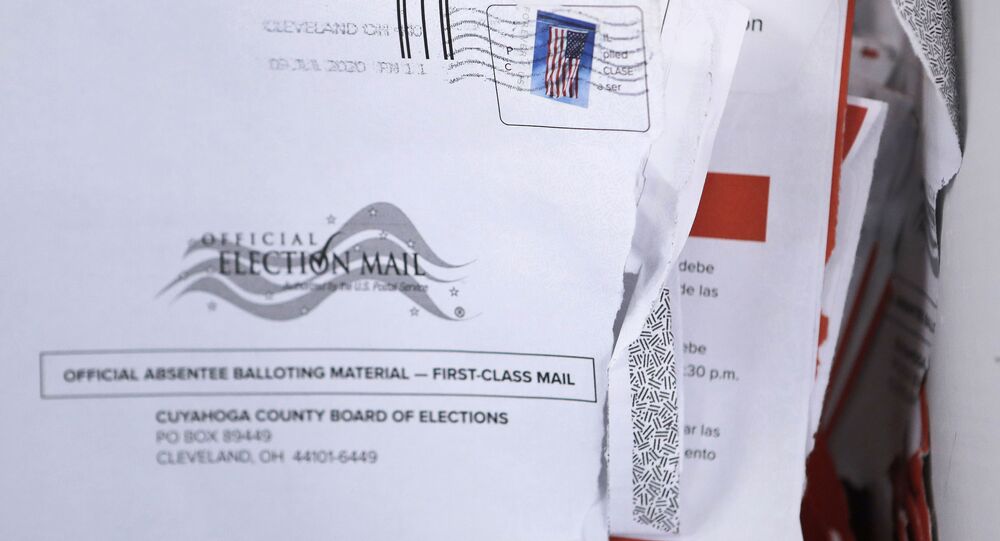 Election officials in nearly all US states were warned by the US Postal Service officials back in July about possible delays resulting from voting via mail-in ballots , according to documents published last week. More American states are now moving to either introduce universal vote-by-mail or ease restrictions associated with absentee voting.

US President Donald Trump reiterated his harsh remarks on Saturday towards the universal mail-in-voting system that has been introduced in nine American states now, with California, Vermont, New Jersey and Nevada, recently joining the ranks.

For the president, who indicated his support for “absentee balloting”, which requires a request for a ballot in advance, the universal mail-in ballot system, where ballots are sent to all registered voters automatically, looked “catastrophic”.

“It’s going to make our country a laughing stock all over the world”, the president said on Saturday.

His comments come following the news that the US Postal Service (USPS) previously warned election officials in 46 American states, including those in such heated battlegrounds as Pennsylvania, Florida and Michigan, that there were risks that not all of the ballots would be delivered to the office on time for Election Day. But several other American states are also now mulling the possibility of resorting to this system in the midst of the coronavirus pandemic.

Fowler recognizes the clear advantages the postal voting presents to those willing to safely cast their vote during the health crisis, but still believes that there are some instances of fraudulent behavior that are associated with it:

An analysis of the risks associated with postal voting should be carried out without the “distraction” associated with the endless Trump-versus-Democrats debate, says Brian Gaines, an elections expert with the University of Illinois.

“Ballots filled out away from the security and privacy of a booth at an official polling station are inherently less secure”, he believes. “They are more subject to coercion, and they are more prone to be ‘lost’ without being properly processed”.

“The more steps there are in the voting process, the more occasions for error”, the election expert notes, comparing procedures surrounding mail-in voting to those when a person simply goes to a polling station.

However, Gaines says that’s not the only issue.

“Beyond errors and coercion, there are more opportunities for fraud when ballots are away from polling stations and effort is required to get them back to the vote counters”, he explains. “Most states do not allow so-called ‘third parties’ to collect absentee ballots (‘bundle’ or ‘harvest’ them), but some do”.

It is the campaign, church or some other organizations collecting ballots for delivery that can potentially intervene in the election process, Gaines explains, as they can “selectively discard ballots on the basis of guesses about how people might be voting, or can tamper with the ballots”.

"None of this means that vote-by-mail is a source of 'massive' fraud or error, but I think that, partisan politics apart, it is plainly more vulnerable to fraud and mistakes than in-person voting", the expert adds.

“In most elections, fraud and error are negligible or marginal, but in a very close election, they can be decisive. This time, with many more states pushing voters to vote by mail, there may be a bit more confusion and maybe a bit more small-scale fraud”, Gaines concludes.

With the USPS delivery systems being overloaded with “millions of ballots” in the course of the November election, logistics indeed becomes “an enormous issue”, says Mitchell Feierstein, CEO of the Glacier Environmental Fund Limited.

“It is highly probable that there be significant fraud with the mail-in ballots”, the hedge-fund manager argues.

Following the news from the US postal authorities that they cannot guarantee that all the mail-in ballots would arrive on time, protesters gathered outside the house of USPS Postmaster General Louis Dejoy, demanding his resignation. But according to Feierstein, “no matter what happens, the result of the 2020 election will not be accepted by one side”.

The group has made it to the Postmaster General’s house in Northwest DC.
USPS has wanted 46 states they can’t guarantee delayed mail-in ballots will be counted. All this as accusations swirl the President is intentionally blocking funding for USPS. pic.twitter.com/dPWvqBWepm