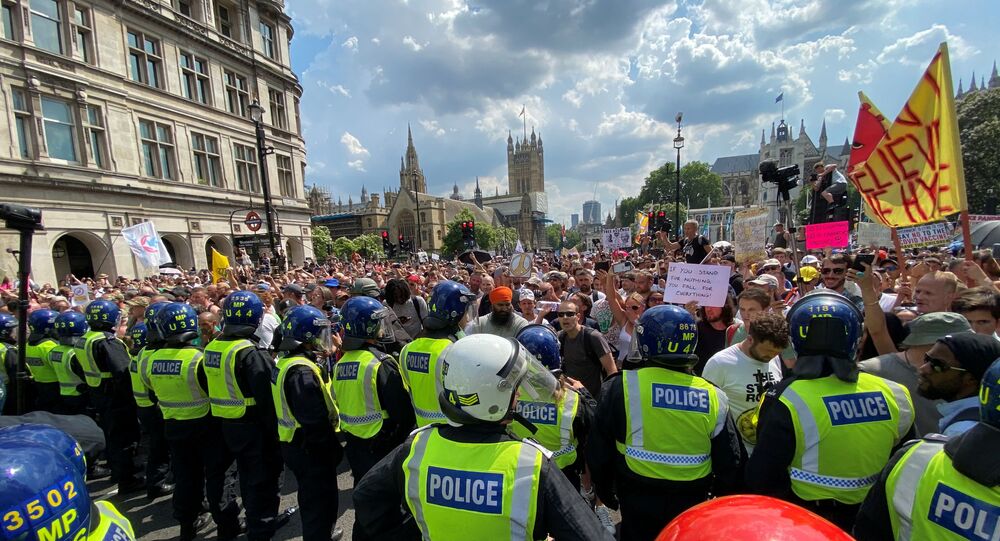 British police officers have been forbidden by law from taking industrial action since 1919, following a strike during the First World War. In compensation, their pay and workplace disputes are meant to be ruled upon by independent bodies.

The UK's Police Federation has declared it has no confidence in the home secretary after she announced a pay freeze.

The federation's National Chair John Apter also said the body, which represents officers who are forbidden by law from forming a trade union, would withdraw from the Police Remuneration Review Body (PRRB) — dubbing it "not fit for purpose".

"The move follows Wednesday's pay announcement and Home Secretary Priti Patel's claim that the government 'recognises the bravery, commitment and professionalism' of police officers, while offering no improved financial package to our members to illustrate that is the case," Apter said in a statement.

"I cannot look my colleagues in the eye and do nothing," he added.

The row is the second public-sector pay row to erupt this week, after Health Secretary Sajid Javid's upping of the one per cent pay offer to NHS workers to three per cent was derided by trade unions as "paltry", "insulting" and a "bitter blow".

© REUTERS / LEE SMITH
Euro 2020: Police Were 'Told' to Ignore Ticketless Fans to Protect Force's 'Image', Officer Claims
Just as healthcare workers have been at the forefront of fighting the COVID-19 pandemic, police have borne the responsibility of enforcing lockdown regulations — and managing protests against them along with a wave of Black Lives Matter demonstrations.

British police officers have been forbidden from taking industrial action since the passing of the 1919 Police Act, which followed two strikes by officers in 1918 — during the First World war — and 1919.

As compensation, their pay and workplace disputes are meant to be adjudicated by independent bodies.

In January 2008 the Police Federation organised an semi-official protest march to Parliament over the then-Labour government's decision to apply a 2.5 per cent raise recommended by the Police Negotiating Board (PNB) six months after it was meant to be awarded.

More than 20,000 officers took the day off work and walked the route to Westminster to demand then-Home Secretary Jacqui Smith backdate the award to September 2007, as had been done in Scotland. Smith stepped down in a reshuffle the following year, and the PNB was replaced in 2014 by the PRRB.