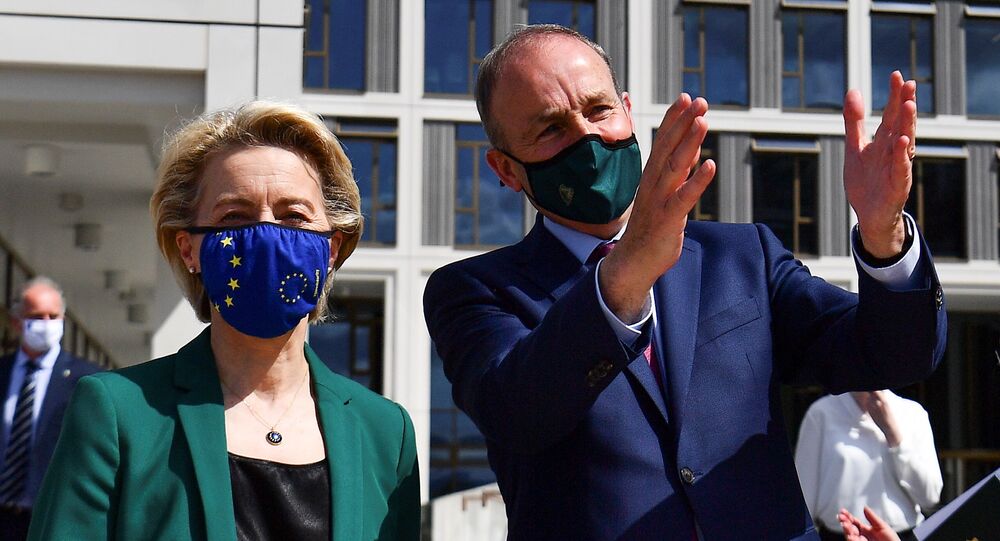 The ostensible aim of the contentious Northern Ireland Protocol is to preserve portions of the 1999 Good Friday Agreement that guarantee free movement across the island of Ireland, while preventing goods from the UK goods being sneaked into the bloc unregulated across the land border

The European Union's (EU) top official has refused to reopen talks with the UK on the post-Brexit trade deal's contentious Northern Ireland Protocol that has sparked unrest in the province.

EU Commission President Ursula von der Leyen insisted "we will not renegotiate" the section of the agreement that has seen border checks and tariffs imposed on goods transported from mainland Britain but not from the Republic of Ireland.

"The EU will continue to be creative and flexible within the Protocol framework. But we will not renegotiate," UVDL tweeted after a phone conversation with British Prime Minister Boris Johnson, adding that it was up to both the UK and the supra-national bloc to "ensure stability and predictability in Northern Ireland".

Johnson "set out that the way the protocol was currently operating was unsustainable", a Downing Street statement said after the call.

"Solutions could not be found through the existing mechanisms of the protocol. That was why we had set out proposals for significant changes to it," the statement read. "He urged the EU to look at those proposals seriously and work with the UK on them."

UK Brexit secretary Lord David Frost told the House of Lords on Wednesday that ongoing problems with protocol meant the UK would be justified in invoking the Article 16 get-out clause — but would rather continue talks with Brussels over the issue.

But he implied the EU was not acting in "good faith" on resolving the impasse.

"We have to operate the NI protocol in good faith," Frost said, but noted that "its burdens have been the source of disruption" and will "worsen in time."

Sausage Peace in Our Time?

Frost pointed out that the protocol had benefitted Irish food producers, since restrictions on the transport of chilled meats and other goods from mainland UK to Northern Ireland had a chilling effect on trade.

“We have seen reductions in supermarket product lines, we have seen 200 suppliers decide they would no longer sell to Northern Ireland," the Brexit secretary said. “We have seen difficulties not just on the famous chilled meats issue but on medicines, on pets, on movements of live animals, on seeds, on plants and on many others.”

© AP Photo / Olivier Hoslet
UK Minister Frost Calls for Change to Brexit Deal Over Northern Ireland Protocol
​The disputes between the UK and the bloc it left in January 2020 has been dubbed the "Sausage War".

The protocol was part of the agreement reached days before the post-Brexit transition period expired on December 31 2020. Johnson and Von der Leyen concluded the final talks in person after Frost and the Commission's French-born chief negotiator Michel Barnier failed to overcome differences on fishing rights — a major political issue in France.

Its ostensible aim is to preserve portions of the 1999 Good Friday Agreement — which ended decades of sectarian terrorism between republicans and loyalists — that guarantee free movement across the island of Ireland, while preventing goods from the UK goods being sneaked into the bloc unregulated across the land border.

However, the vast majority of UK exports to Ireland arrive by sea or air at ports in the Republic rather than by the small country roads crossing the land border, and the origins of high-value British-made goods such as road vehicles or components for airliners would be hard to disguise.

Article 16 allows either party to take unilateral action in breach of the protocol if it "leads to serious economic, societal or environmental difficulties that are liable to persist".

Sinn Fein, the leading nationalist party in Northern Ireland, changed its stance from opposition to the EU to oppose leaving in the 2016 membership referendum. It has since used the issue to demand a vote on reunification with the Republic.