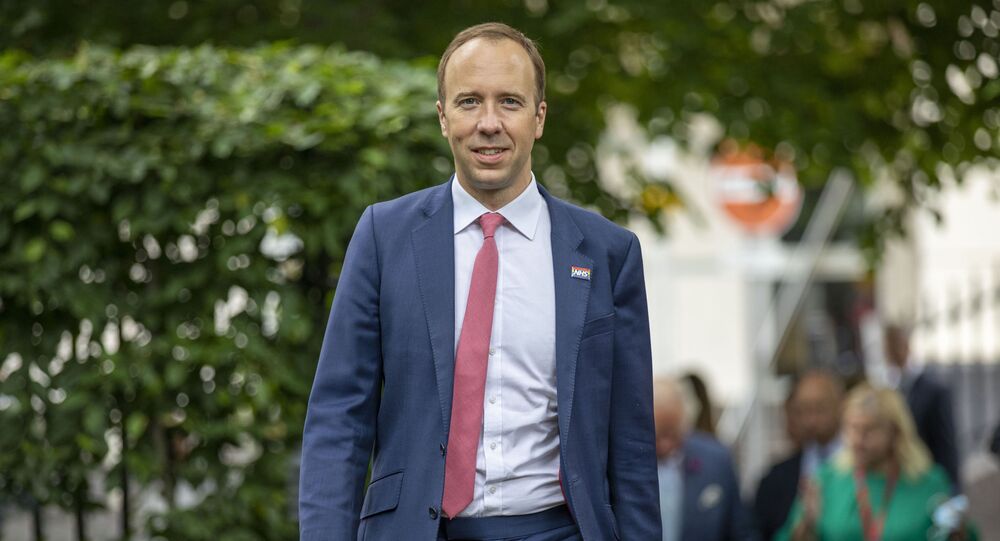 Matt Hancock lost his job as health secretary after he was caught on CCTV camera intimately embracing his married aide Gina Coladangelo at his office in breach of COVID-19 social distancing rules in place at the time. Hancock, a married father of three kids, split with his wife after the affair became known to the public.

A spokesman for Boris Johnson has signalled the prime minister's commitment to a "free press" after two homes in England were raided by officials from the Information Commissioner's Office (ICO). The latter are currently investigating the leak of CCTV footage showing Matt Hancock's affair with a married aide.

Hancock, himself married, was caught on camera locking lips with Gina Coladangelo, millionaire lobbyist and university pal, who has three children with British businessman Oliver Tress. The intimate images, reportedly snapped by the CCTV camera in Hancock's office on 6 May, were leaked to the British tabloid The Sun on 23 June by a whistleblower, according to the newspaper's editor Victoria Newton.

The unidentified person aimed to highlight the minister's hypocrisy regarding his own COVID rules forbidding intimate contact with other people outside of your own household until 17 May, but got into hot water with the authorities for filming Hancock without the latter's consent.

Newton said she would not give out the whistleblower's identity and would "rather go to jail" than reveal his name.

Following the leak, ICO was called on to investigate the "breach" in security by Emcor Group, which provides the CCTV network at the Department of Health and Social Care.

ICO revealed this week that two British homes were raided in connection with the video leak.

"As part of the investigation, ICO teams searched two residential properties in the south of England on Thursday 15 July 2021", the office said in a statement.

"Personal computer equipment and electronic devices were seized as part of the operation and the ICO's enquiries into alleged breaches of section 170 of the Data Protection Act 2018 continue".

The raids have caused a backlash among campaigners and the general public, who said the move discourages whistleblowers from coming forward and holding the authorities accountable for their misdeeds.

Mick Hume, a free speech campaigner, added: “The UK’s ‘data watchdog’ is acting more like a Stasi police dog, launching morning raids on people’s homes and impounding personal computers in its desperation to hunt down the whistle-blower.”

The office for Prime Minister Johnson told The Telegraph that it was not appropriate at the moment "to comment any further" on the ongoing investigation but said that Boris Johnson has always been a defender of free speech.

"More broadly, the prime minister previously has spoken about his belief of the importance of a free press, which can investigate matters that are in the public interest", the spokesperson said.

Yet he refused to say whether the prime minister was alerted about the raids in advance:

"It's an independent investigation, so it is led by them, it'd be inappropriate for me to comment".

According to ICO Director of Investigations Steve Eckersley it was still "vital" for people working and visiting public buildings to "have trust and confidence in the protection of their personal data captured by CCTV", so an investigation into the matter was justifiable.

Matt Hancock resigned as secretary of state for health and social care on 26 June, two days after his affair became public. It was reported that he and Coladangelo have now moved in together.