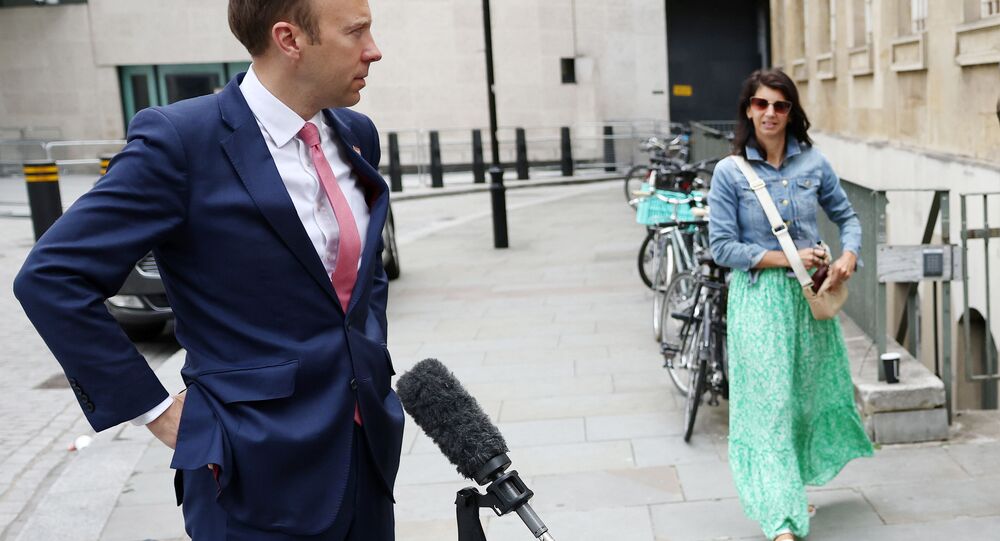 UK Health Secretary Matt Hancock at the centre of an adultery scandal, involving his close aide, Gina Coladangelo, after British media leaked a photo and video of the pair, both married, smooching in his office on 6 May.

Gina Coladangelo, the aide to the UK Health Secretary, is experiencing some unsolicited notoriety after her relationship with Matt Hancock has been thrust into the spotlight.

The mum-of-three was recruited by Hancock to the Department of Health and Social Care as an unpaid adviser on a six-month contract in March 2020. Images showing Coladangelo and Hancock – husband of 15 years and father of three children – locking lips in his office on 6 May were published by The Sun on Thursday night and ignited a media frenzy.

The footage dates to almost two weeks before hugging between households was officially allowed under the relaxation of COVID-19 rules in the UK. Accordingly, critics slammed the minister for “hypocrisy” as he had vehemently reiterated the need to maintain social distancing guidance. The Labour Party and Liberal Democrats have called for Hancock to be fired as a result.

“If Matt Hancock has been secretly having a relationship with an adviser in his office — who he personally appointed to a taxpayer-funded role — it is a blatant abuse of power and a clear conflict of interest. His position is hopelessly untenable. Boris Johnson should sack him,” said Labour Chairman Anneliese Dodds.

Social media took aim at Hancock, recalling that back in May last year, when a breach of social distancing rules by Professor Neil Ferguson, a government adviser, was discovered, Hancock had said it was the right decision for him to resign.

The Health Secretary Hancock expressed apologies for his actions on Friday, saying:

“I accept that I breached the social distancing guidance in these circumstances. I have let people down and am very sorry. I remain focused on working to get the country out of this pandemic, and would be grateful for privacy for my family on this personal matter.”

In response to calls to sack the errant minister, a No. 10 spokesman said:

“The prime minister has accepted his apology and considers the matter closed," and it was added that the appointment of Coladangelo “followed all correct procedures.”

Coladangelo, who has been friends with Hancock since they met at Oxford University in the early 2000s, is a major shareholder at lobbying firm Luther Pendragon, based in central London, according to British media. She is also communications director at Oliver Bonas, a fashion and lifestyle store founded by her husband, Oliver Tress.

Just found out the husband Gina Coladangelo cheated on is a very rich silver fox… pic.twitter.com/lZaS4MGIn6

Hancock, who has been married to Martha Hoyer Millar since 2006, appointed Coladangelo to the Department of Health and Social Care as an unpaid adviser on a six-month contract in March last year.

This triggered "chumocracy" claims, as a report in The Times in November 2020 claimed Hancock failed to declare that he had chosen his closest friend as an adviser, subsequently landing her with a £15,000-a-year role on the board of his department.

If you like Gina Coladangelo
and getting caught in the rain ... pic.twitter.com/VErFi1VVRR

​A source told The Sunday Times at the time:

"Before Matt does anything big, he'll speak to Gina. She knows everything."

Furthermore, reports say that since April, Coladangelo has wielded a parliamentary pass, bearing her husband’s surname, granting unregulated access to the Palace of Westminster. Currently, she is officially listed on the Department of Health website.

Hancock, a member of the group of cabinet ministers who determine COVID-19 policy in the UK, was recently the target of a barrage of allegations from former top Downing Street aide, Dominic Cummings, who accused him of “criminal, disgraceful behaviour” in the early days of the pandemic.