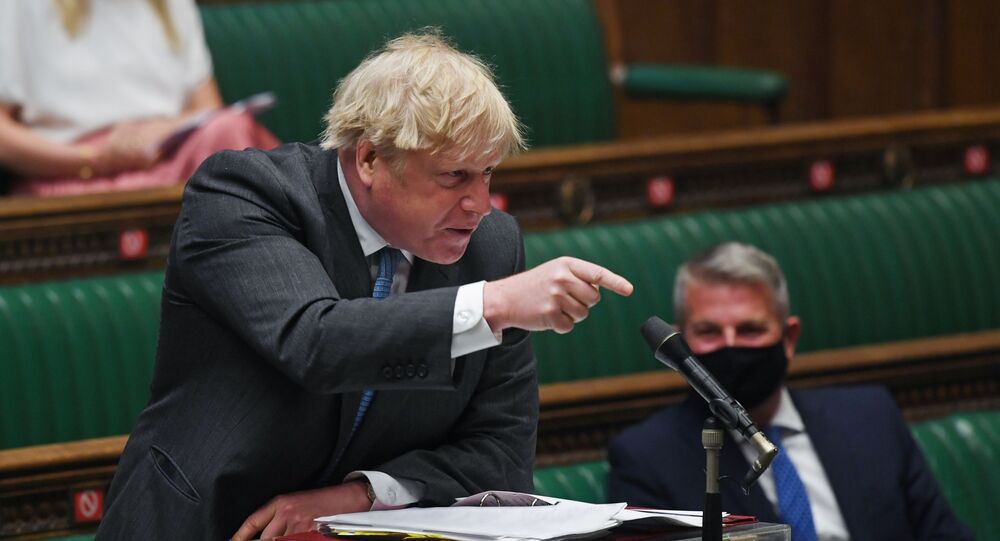 The Johnson government won Tuesday's vote on cuts to the UK's foreign aid as Chancellor of the Exchequer Rishi Sunak cited possible tax hikes to counter the Tory rebellion. Why have UK lawmakers supported No. 10's move regardless of increasing pressure from the press, prominent political figures, activists and, reportedly, global philanthropists?

The UK Treasury announced a plan to slash spending on overseas aid from 0.7 percent of the country's gross national income to 0.5 percent in November 2020, triggering a wave of criticism from Labour leaders and dissenting Conservatives. Large global non-profits have also signalled their concerns about BoJo's move, with the Bill and Melinda Gates Foundation, George Soros' Open Society Foundations, and a number of other charities reportedly pledging to send their funds to the third-world countries left without British aid.

Up to 50 Tory rebels have repeatedly tried to vote Boris Johnson's cuts down but their attempts were thwarted by Speaker of the House Lindsay Hoyle. Yet, on Tuesday, MPs voted 333 to 298 to back reducing foreign aid spending.

Prior to the decisive vote, Chancellor of the Exchequer Sunak released a written statement on Monday night, highlighting that the cuts are a temporary measure and promising to increase the UK's foreign spending back to 0.7 percent of national income when the country solves the issue of its COVID-related debt.

"However, if the house were to negative the motion, rejecting the government's assessment of the fiscal circumstances, then the government would consequently return to spending 0.7 percent of GNI on international aid in the next calendar year, and with likely consequences for the fiscal situation, including for taxation and current public spending plans", the chancellor of the exchequer emphasised.

It appears that Sunak's threat resonated with British lawmakers, while at the same time prompting further concerns in the press.

ANALYSIS: Today's Commons win by the Government matters hugely - not just because of consequences for aid spending.

Chancellor Rishi Sunak can now point out he has a majority against tax rises.

Expect him to deploy that repeatedly through the Autumnhttps://t.co/PMHBq21Ko2

​Although the measure is said to be temporary, the return to 0.7 percent spending "has been pushed off almost certainly until the next Parliament, and possibly to future decades", argues Sky News. According to the media outlet, Tuesday's vote "will likely change the direction of the public spending debate this autumn and beyond".

The Conservatives have just voted to cut international aid.

Cutting aid to help the world's poorest during a pandemic is callous - and not in our national interest.

Boris Johnson is damaging Britain's reputation around the world.

​The development appears to be especially disturbing given that the sum of money annually spent on foreign aid is "relatively small compared to total government debt and the size of the economy", according to Wyn Grant, professor of international politics at Warwick University.

"The backlash reflects the view that a relatively wealthy country like Britain should help poorer countries even when it faces challenging times financially", says Grant. "The aid cut has threatened the continuation of some vital programmes. Having donors like Bill Gates step in to fill the gap has been embarrassing".

We are contributing $10 million to this effort to protect health services for poor women in the face of the UK Government’s development aid cuts. (1/4) https://t.co/l0OpEAHmbw

​In contrast, Rodney Atkinson, a British academic and political economist, believes that Sunak is right.

"A country with £2 trillion debt (99 percent of GDP) cannot afford [a] wasteful aid programme of 0.7% of GDP", argues the political economist. "Lord Peter Bauer, former professor of economics at the London School of Economics, rightly described aid as 'money taken from poor people in rich countries and given to rich people in poor countries'".

The UK gives more than any other western country except Germany in terms of foreign aid, according to the economist. He notes that even after the 0.5-percent reduction London is going to give away a considerable sum of money, i.e. around £10 billion ($13.8 billion), which would be 50 percent more than Japan or France and more than twice as much as Italy.

Furthermore, a portion of the UK's funds does not even go to the poorest countries, Atkinson notes: "Billions in aid goes to countries like India, China, and Pakistan who have extensive military programmes, nuclear weapons and space programmes which the UK cannot afford", he says.

The economist believes that if the reduction in wasteful aid is replaced by the promotion of fair trade with poor countries it will be more helpful for the UK economy and third-world states.

To complicate matters further, aid goes to those with no tradition of property ownership and countries with no legal protections and massive corruption, he notes. As a result, the aid fails to lay a foundation for sustainable wealth creation to support the growing populations of poor states, the economist points out.

The British population appears to maintain favourable views on the proposed foreign aid cuts. Nationwide polls in November 2020 and March 2021 indicated that about 70 percent of Britons support either reducing or stopping UK overseas aid altogether during the COVID pandemic, with just 28 percent believing the financial assistance to poor countries should be maintained or even increased.