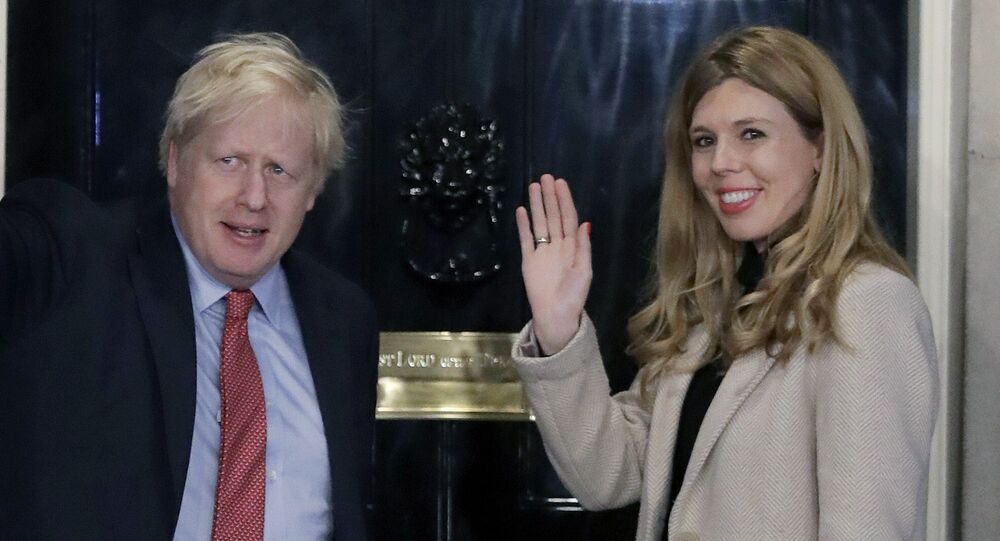 Boris Johnson, 55, and Carrie Symonds, 33, became the first unmarried couple to move into Downing Street in 2019. They announced their engagement and the fact that they were expecting a baby in early February 2020 but reportedly put their marriage plans on hold due to the coronavirus pandemic.

UK Prime Minister Boris Johnson is to finally walk down the aisle with his fiancée, Carrie Symonds, next summer, reported The Sun.

A flurry of save-the-date cards ostensibly sent out to family and friends mention the date Saturday, 30 July 2022, according to the outlet. Tipped as a likely venue is the Prime Minister’s Buckinghamshire residence, Chequers.

Port Lympne safari park in Kent has also been mentioned as a possible location for the event, as Symonds works for the conservation charity Aspinall Foundation that runs the vast reserve.

“It would be nice for Chequers to be in the news for happy reasons for once,” a source was cited as saying.

Previous reports has hinted the pair could tie the knot in Italy, where Symonds, whose association with Johnson goes back to when she worked on his successful re-election bid as London mayor in 2012, has relatives.

However, with coronavirus pandemic travel restrictions this has been dismissed by the media as unlikely and impractical.

There have not been any official comments from Downing Street and aides to the prime minister.

Symonds, who studied art history and theatre studies at Warwick University, joined the Conservative Party as a press officer in 2010.

Two years later she worked on Johnson's successful campaign to be re-elected mayor in London. After becoming the party's head of communications, Symonds left in 2018 to work in public relations for Oceana, a project aimed at protecting sea life.

The couple become the first unmarried pair to move into Downing Street in July 2019.
Media reports have said that Boris Johnson proposed to his girlfriend while on holiday on the Caribbean island of Mustique, shortly after his landslide victory in the December 2019 General Election.

Johnson, 55, and Symonds, 33 announced their engagement in February 2020, while also revealing they were expecting a baby in early summer. Their son Wilfred Lawrie Nicholas Johnson was born on 29 April 2020, and given the middle name Nicholas after two doctors who saved the PM’s life when he contracted COVID-19 that year.

Marriage plans were put on hold due to the coronavirus pandemic and the restrictions efforts to contain it entailed.

Asked in March this year whether he would be taking the plunge as soon as lockdown restrictions were fully lifted, the PM was quoted by The Sun as responding:

“The wedding industry is certainly going to come roaring back in common with many other sectors of the economy.”

Third Walk Down the Aisle

While this will be a first wedding for Carrie Symonds, daughter of one of the founders of the Independent newspaper, Matthew Symonds and newspaper lawyer Josephine McAffee.

Johnson, whose anything but dull biography is reportedly studded with a succession of overlapping romances, failed marriages, and even a "secret love child", will be attempting a third “do-over”.

Johnson’s first wife was Allegra Mostyn-Owen who he married in 1987 after they met at Oxford. The marriage ended when he had an affair with Marina Wheeler who gave birth to the first of the couple’s four children just five weeks after they married in 1993.
After their marriage pic.twitter.com/cc8oshqdd0

The current PM married first wife Allegra Mostyn-Owen in 1987. After the marriage was annulled in 1993, Johnson married Marina Wheeler the same year. The couple, who went their separate ways in 2018, had four children.

​Several weeks ahead of the public announcement of Johnson’s engagement to Symonds, the politician formally divorced Wheeler.

Media reports have often speculated on the degree of Symonds’s influence over policy decisions at Downing Street, and her role in the decline of the era of former senior PM’s advisers Dominic Cummings and Lee Cain.

Carrie Symonds was also implicated in the so-called "cash for curtains scandal" engulfing the Prime Minister and his fiancée.

Renovations to the 11 Downing Street flat prompted a UK Electoral Commission probe into claims of hefty unregistered private donations to a tune of £200,000 ($277,400) to cover the lavish refurb.