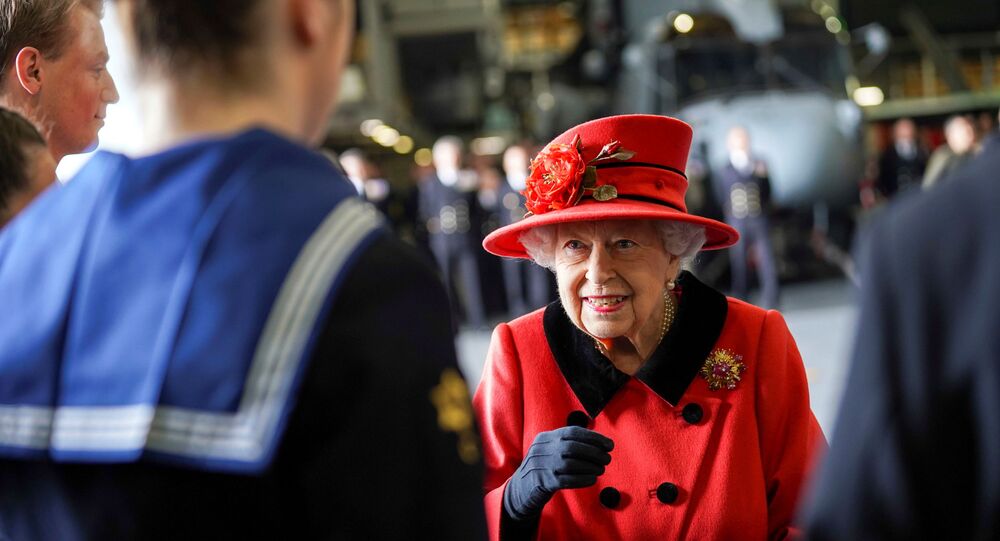 Upon the UK government’s recommendation to shift the country’s focus toward the Indo-Pacific region where China’s influence is growing, the HMS Queen Elizabeth flagship will sail all the way to the Philippine Sea from the Mediterranean. Boris Johnson insists that the deployment shouldn’t be seen as confrontational by “friends in China."

Queen Elizabeth II paid a quick visit to Portsmouth Naval Base on Saturday to greet her namesake ship – HMS Queen Elizabeth – ahead of its 28-week operational deployment to the Far East, according to AP.

The 95-year-old monarch arrived at the base by helicopter just a day after Prime Minister Boris Johnson toured the flagship, which carries eight RAF F35B stealth fighter jets. The ship is expected to depart Portsmouth Naval Base on Saturday accompanied by 14 helicopters, a submarine, and six Royal Navy ships.

© REUTERS / POOL
Britain's Queen Elizabeth meets personnel during a visit to HMS Queen Elizabeth ahead of the ship's maiden deployment at HM Naval Base in Portsmouth, Britain May 22, 2021

HMS Queen Elizabeth is expected to visit at least 40 countries on its journey. Its first stop is Gibraltar – it will then sail through the Mediterranean Sea while conducting exercises with NATO allies. The carrier will stop short of entering the Black Sea, as an international treaty dictates, but the UK Navy's Type 45 destroyer and Type 23 frigate from the task group are reportedly prepared to head into the region “to show solidarity with Kiev” amid Ukraine’s accusations of a Russian military buildup, senior naval sources told The Times last month.

After transiting through the Suez Canal to the Gulf of Aden, the carrier will sail to the Arabian Sea and Indian Ocean – where the group will conduct exercises with the Indian Navy and pay a brief visit to  Singapore. Visits to the disputed South China Sean region for freedom of navigation exercises are also said to be on the list, followed by a trip to South Korea and Japan.

The deployment, which will also include a celebration of the 50th anniversary of the Five Powers Defence Agreement with Australia, New Zealand, Malaysia, and Singapore will be carried out as a part of the UK’s decision to “tilt to the Indo-Pacific region.” This comes following a foreign policy review by the British government, which recommended the move to respond to China’s growing power.

According to Defence Secretary Ben Wallace, the high-profile deployment “will be flying the flag for Global Britain” to project its influence across the globe.

But PM Johnson maintains that the move should not be deemed threatening or confrontational by China's allies.

“One of the things we'll be doing clearly is showing to our friends in China that we believe in the international law of the sea and, in a confident but not a confrontational way, we will be vindicating that point,” Johnson said on Friday during his visit to HMS Queen Elizabeth.