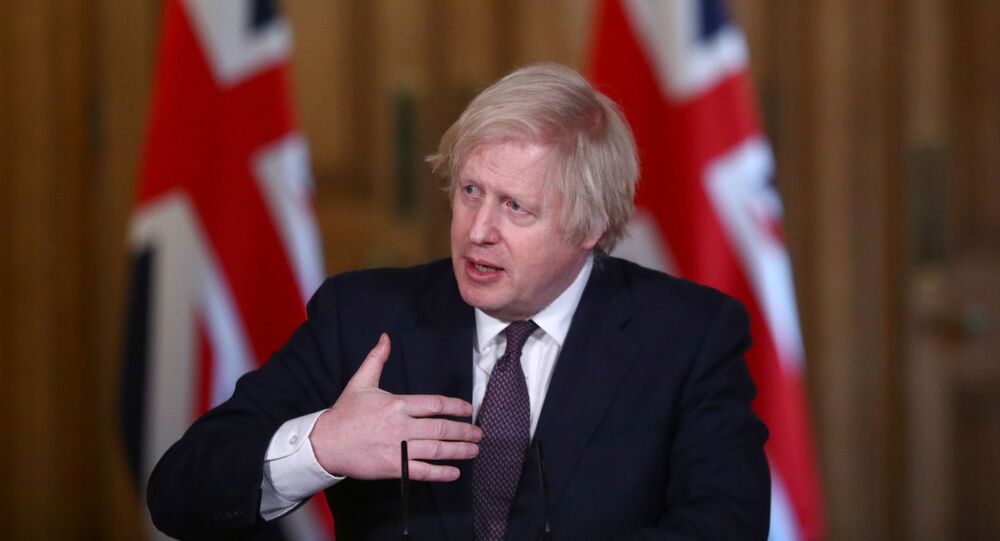 On Monday, Boris Johnson denied that he had ever made remarks about letting "bodies pile high in their thousands" in the UK amid the coronavirus pandemic.

The Times has cited unnamed sources as saying that during a UK government debate in September 2020, Prime Minister Boris Johnson described COVID-19 lockdowns as "mad", expressing concerns about the economic consequences of such measures.

The sources claimed he told his aides at the time that there was no evidence lockdowns worked and that he would rather "let it [the coronavirus pandemic] rip" than impose a second lockdown in the country.

According to the insiders, the British prime minister also voiced regret about the first lockdown as he compared himself to the mayor in the noted film "Jaws" who ordered the beaches to remain open in the face of a possible risk of shark attacks, and who was allegedly praised by Johnson as the "real hero" of the film. The prime minister ultimately announced a second lockdown for England in October.

Downing Street was quick to denying the claims, dubbing them "gross distortions of his position". A No. 10 spokesperson stressed that "throughout this [COVID-19] pandemic we've done everything we can to save lives and protect livelihoods".

The claims followed Johnson on Monday refuting separate allegations related to his position on the lockdown as "total rubbish".

"No more f***ing lockdowns – let the bodies pile high in their thousands!", the prime minister ostensibly said in late October 2020 after Minister for the Cabinet Office Michael Gove warned him that soldiers would be needed to guard hospitals overwhelmed with COVID-19 victims, according to the Daily Mail.

Asked whether he made such a statement, the prime minister said no, adding that people want the government to "make sure that the lockdowns work".

Gove, for his part, told the Daily Mail "the idea that he [Johnson] would say any such thing I find incredible". The Minister for the Cabinet Office added that he "was in that room" and that he "never heard language of that kind". Downing Street slammed the newspaper's report as "another lie".

This comes amid an ongoing row between Johnson and his former chief adviser Dominic Cummings, as the latter reportedly plans to blame the UK prime minister personally for tens of thousands of deaths during the coronavirus pandemic.

The ex-top aide is due to share sensitive data with UK lawmakers on 26 May, as part of a probe into the government's handling of the pandemic by the health and science select committees.

The conflict was preceded by a leak of text messages dating back to March 2020, in which Johnson allegedly assured tech billionaire James Dyson that his employees would not have to pay additional taxes if they came to the UK to make ventilators amid the COVID-19 pandemic.

Cummings denied making public the Johnson-Dyson text messages as well as the details of the second coronavirus lockdown in England before it was announced. In his recently published 1,000-word blog post, Johnson's former aide wrote that he "was not directly or indirectly a/the source for the BBC/Kuenssberg story on the PM/Dyson texts" and that he was "happy to meet with the Cabinet Secretary and for him to search my phone for Dyson messages".

When asked if he thought Cummings had leaked details of his contacts with Dyson, Johnson, for his part, told the British radio station LBC that he does not think "people give a monkey's about this issue". "What they care about is what we'll be doing to protect the health of the British public and that's what I care about", the PM pointed out.

© REUTERS / TOBY MELVILLE
'Dom Has Stuff on Tape': Cummings Will be Able to Back up His Claims Amid War With BoJo, Ally Says
Earlier, sources argued London fears that during the 26 May gathering, Cummings may also reveal details about the prime minister's life with his fiancée Carrie Symonds.

Previous media reports asserted that Johnson was secretly trying to set up a charity that would cover the costs of the refurbishment of his official residence, supervised by Symonds. According to the reports, the prime minister was particularly alarmed by the cost of the "gold wall coverings" chosen by his fiancée.