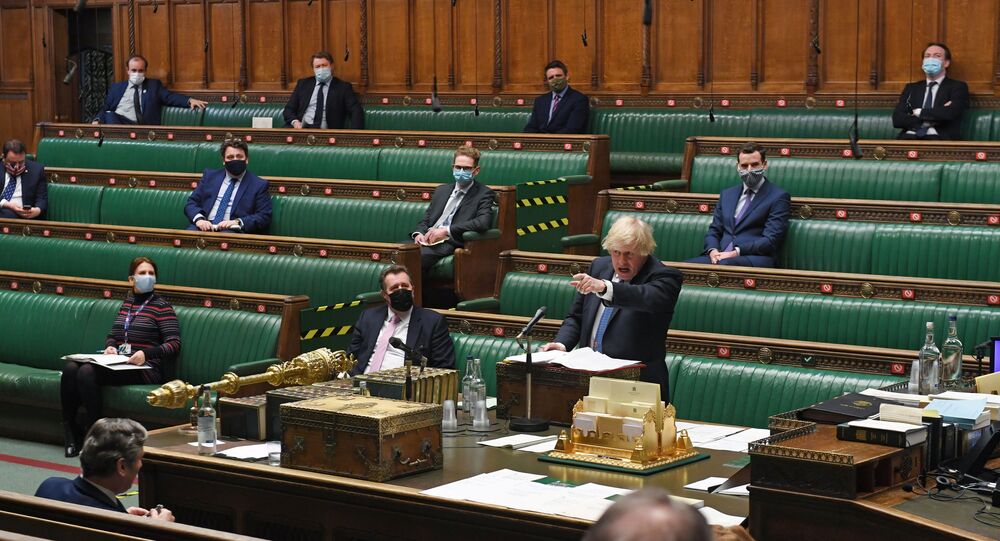 UK Prime Minister Boris Johnson said this week that “no change to the next steps of the roadmap” should be anticipated over a plan to remove all social contact restrictions in the country by 21 June. But MPs will hold a vote on Thursday on whether the restraints should be prolonged further.

British Conservatives are sending angry vibes towards Prime Minister Boris Johnson; on Thursday they'll vote on whether or not to potentially extend “draconian” coronavirus measures for another six months, the Telegraph reported.

“Dozens” of Tory MPs are expected to rebel against the laws that ban protests and currently permit arrest of citizens not following COVID restrictions. The Telegraph previously explained that these measures “were not amendable” and MPs will have no choice but to extend the Coronavirus Act to 25 September.

But many Conservatives are still frustrated with the legislation.

Tories Are In Doubt – Why to Extend?

The chairman of the Covid Recovery Group, Mark Harper, says that the act contains “some of the most draconian detention powers in modern British legal history, giving the police and other officials the power to detain us, potentially indefinitely”.

PM Johnson earlier called to reclaim “freedoms” by 21 June with a roadmap slowly ditching lockdown restrictions through spring and earlier summer. According to the plan, by 17 May British citizens would be allowed to gather indoors at groups of up to six people; with cinemas, theatres and hotels set to reopen and people welcomed at stadiums again.

© REUTERS / HENRY NICHOLLS
The City of London financial district can be seen as people walk along the south side of the River Thames, amid the coronavirus disease (COVID-19) outbreak in London, Britain, March 19, 2021

But Harper says if the “most temporary provisions” of the Coronavirus Act are extended until October, this would contradict Johnson’s pledge and “will raise justifiable concerns that restrictions will be reintroduced in the autumn”.

He explains that some MPs are trying to suggest that the Act “needs to be extended to October to keep the furlough scheme and other financial support packages”.

But the chairman is certain this reasoning is faulty, as COVID support packages will remain in place regardless of what will the parliament choses on Thursday.

“If we are really meant to believe that the government’s roadmap will be 'reclaiming our freedoms' by June 21, why would Parliament extend the temporary provisions of the Coronavirus Act all the way until October?” Harper asks.

MPs will also decide on Thursday on the future of other lockdown measures not covered in the act that are due to expire on 31 March.

Anti-lockdown protests swept London this Saturday, as demonstrators were demanding to ease COVID restrictions, leading to dozens of arrests over breach of coronavirus rules.

© REUTERS / HENRY NICHOLLS
Police officers detain a demonstrator during a protest against the lockdown, amid the spread of the coronavirus disease (COVID-19), in London, Britain March 20, 2021

On 18 March, Johnson confirmed during a press conference that there will be “no change to the next steps of the roadmap” despite shortages to the supply of COVID vaccine expected next month, raising even more questions about the purpose of the upcoming vote and its impact.

As more than half of the UK adult population - over 26 million people – have now received a first dose of COVID-19 vaccine as of Saturday, Harper and other British MPs have been questioning the ongoing restrictions in the country, slamming Johnson’s roadmap for being based on “dates” rather than on “data”.

“Given that we have vaccinated such a large proportion of the groups vulnerable to Covid-19, we have tougher restrictions than last summer, when we hadn’t even approved a single vaccine,” Harper pointed out in a comment piece of the Telegraph.

On Friday, the UK inoculated a record number of Britons, who received 711,156 COVID doses in one day.