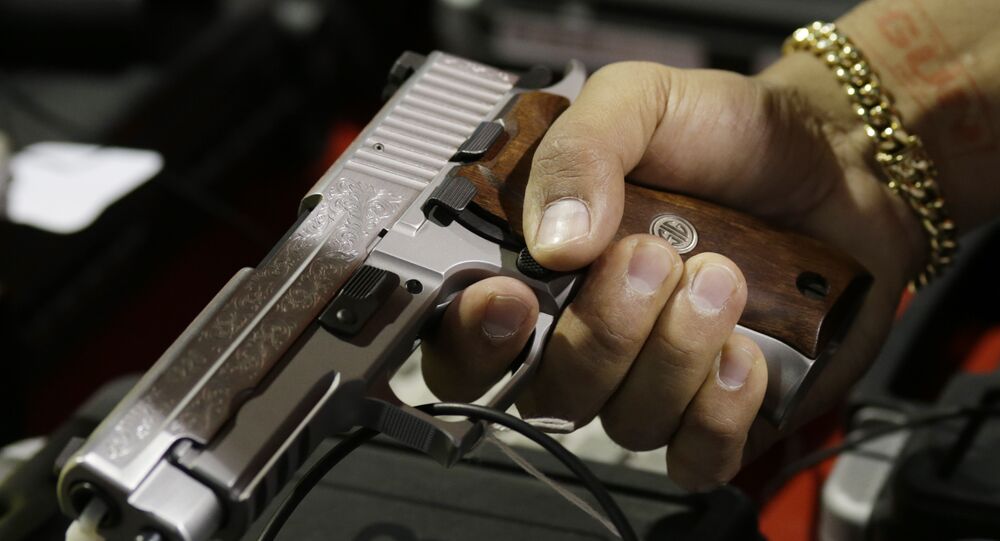 President Joe Biden last week announced several executive actions to combat the “epidemic and…international embarrassment'' of gun violence in the United States. But despite another mass shooting in Indianapolis the right to bear arms remains enshrined in the law.

Police in the US city of Indianapolis say a gunman killed eight people and then shot himself in an incident overnight at a FedEx depot.

Four other people were taken to hospital, including one person who remains after the shooting near Indianapolis International Airport.

​The Gun Violence Archive said it was the 147th mass shooting in 2021 alone. A mass shooting is one in which at least four people receive gunshot injuries.

Sputnik takes a look back at some of the shootings which have hit the headlines this year and in previous years.

Eight people were killed in three massage parlours in the suburbs of Atlanta, Georgia on 16 March this year.

Seven of those killed were women and six of them were of Asian descent, mainly Korean.

Robert Aaron Long, 21, a white man, has been charged with murder.

Long reportedly said he was a sex addict and had killed the women because they were a temptation but many in the Asian-American community claimed it was actually a hate crime.

On 3 August 2019 Patrick Crusius, 21, walked into a Walmart supermarket in El Paso, Texas, and shot dead 22 people, injuring 23 others.

After being apprehended by Texas police following the shooting, Crusius told them had specifically targeted Mexicans in the massacre and he also posted a racist manifesto on the online forum 8chat.

Crusius faces the death penalty if convicted at his trial, which is due to take place later this year.

He also faces a maximum sentence of life in prison for the 23 charges related to the surviving victims.

The nationalities known of the victims include one German, 13 US citizens and seven Mexican nationals.

On 1 October 2017 a sniper began firing at crowds of people attending a country music festival in the grounds of the Mandalay Bay casino and hotel in Las Vegas, Nevada.

© AP Photo / John Locher
Police officers stand along the Las Vegas Strip near the Mandalay Bay resort and casino during a shooting at a country music festival, in Las Vegas. (File)

Stephen Paddock, 64, a retired accountant, killed 58 people and injured more than 800 before police broke into his room and shot him dead.

An investigation into Paddock found he was a gambler, obsessed with cleanliness, possibly bipolar and having problems with his girlfriend.

Paddock’s girlfriend, Marilou Danley, told investigators he had become “distant” in the year before the shooting and described him as “germophobic” with strong reactions to smells, always feeling ill, in pain and fatigued.

Investigators said Paddock, a real estate investor, suffered from “bouts of depression,” apparently caused by the loss of a “significant amount of wealth”’ since 2015.

© REUTERS / Omar Mateen via Myspace
An undated photo from a social media account of Omar Mateen, who Orlando Police have identified as the suspect in the mass shooting at a gay nighclub in Orlando, Florida, US, June 12, 2016

Mateen, a Muslim who was born in New York, called 911 during the attack and said: “I pledge allegiance to Abu Bakr al-Baghdadi of the Islamic State*.”

But it later emerged that Mateen was himself homosexual and had frequented the club often and it is believed he carried out the massacre because of the inner turmoil between his sexuality and his religion.

Mateen died in a shootout with police after being lured out of the club’s bathroom, where he had holed up with some hostages.

A few hours before the massacre at the nightclub another gunman, Kevin Loibl, 27, shot dead singer Christina Grimmie, 22, at a concert venue on the other side of Orlando. Loibl then killed himself.

Lanza had shot dead his mother before carrying out the massacre.

In 2019 the US Supreme Court gave the green light for a lawsuit against the Remington gun manufacturer over the massacre.

Connecticut Supreme Court had ruled that Remington could be sued by victims’ families for how the company marketed the assault-style weapon Lanza used to carry out the massacre.

Remington, joined by a number of gun rights activists, had argued that federal law protects weapons manufacturers from being sued over gun crimes.

The Sandy Hook massacre continues to be subject to a conspiracy theory by gun rights activists who claim it did not take place.

On 20 April 1999 Columbine High School seniors Eric Harris and Dylan Klebold entered the premises of their school on the outskirts of Denver, Colorado at around 11:00 am, planting several makeshift bombs at different locations and then opening fire on both students and teachers.

Using their arsenal of illegally obtained weapons, which included a carbine, a semi-automatic pistol, and two shotguns, the two killed 12 students and a teacher, injuring 21 more.

After around 40 minutes of carrying out the massacre, the attackers killed themselves.

Harris and Klebold, and a couple of other friends, dubbed themselves the Trenchcoat Mafia. They wore black trench coats and loathed the school 'jocks' who had bullied them for being different.

*Daesh, otherwise known as Islamic State, is outlawed in many countries, including the United States and Russia.