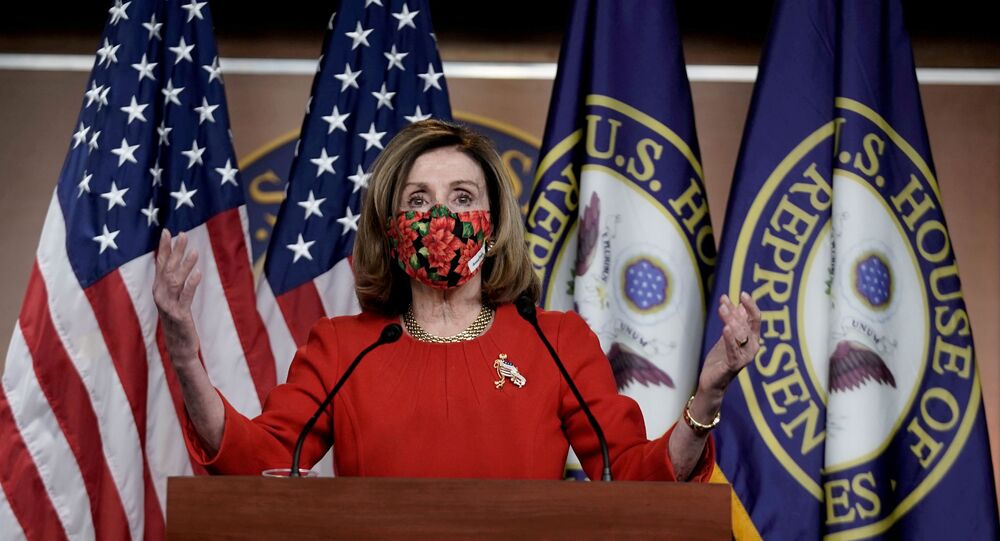 Following the storming of Capitol Hill by pro-Trump protestors earlier this month, federal police have arrested a number of people connected to the incident. During the event, speaker Nancy Pelosi had her office broken into and laptop stolen.

A woman who was involved in the 6 January US Capitol riot in Washington, DC has been charged by federal prosecutors on Saturday after she was caught on video making abusive remarks about Democratic House Speaker Nancy Pelosi.

Dawn Bancroft was charged alongside Diana Santos-Smith for breaking into the Capitol grounds, being in a restricted area, and disorderly conduct in a restricted building.

Investigators highlighted a "selfie" video they say was shot by Bancroft, in which she's allegedly heard saying, "We broke into the Capitol. ... We got inside, we did our part."

"We were looking for Nancy to shoot her in the friggin' brain, but we didn't find her," Bancroft said, according to the affidavit.

​According to Santos-Smith, she and Bancroft did not enter any chambers or offices, and claims they were only in the Capitol building for less than a minute.

A number of protestors involved in the storming of the government building have been arrested and/or charged for a variety of offences, including aiding and abetting the theft of government property.

The missing laptop has not yet been recovered.

Jacob Anthony Chansley, known as Jake Angeli or "Q Shaman" from Glendale, Arizona has become a standout figure in the riots for sporting face paint, a fur hat, and horns while carrying a sign reading "Q sent me."

The 33-year-old has been charged with violent entry and disorderly conduct after being seen in photos and videos breaking into the Congress and the Senate chambers.

​Michael Sherwin, US Attorney for the District of Columbia, said earlier this week that police had identified 400 suspects and arrested 135 in connection with the Capitol breach, as of 27 January.

The incident took place following a protest by supporters of former President Donald Trump outside Capitol Hill where the Electoral College had convened to formally declare Joe Biden the winner of the 2020 presidential election.

Encouraged by Trump's claims that the vote was stolen through electoral fraud by the Democrats, the demonstrators intended to prevent the count taking place.