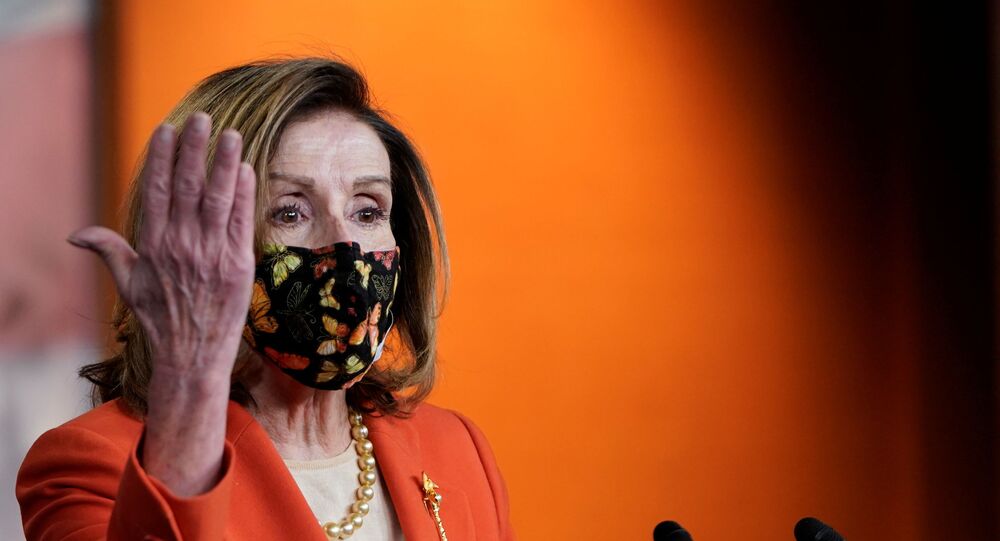 Earlier, House Speaker Nancy Pelosi labelled legislators bringing weapons into Congress for their own protection as "the enemy within", as several GOP Representatives revealed that they were armed and prepared to protect themselves during the Capitol Hill riots.

Former US Rep. Tulsi Gabbard of Hawaii has denounced House Speaker Nancy Pelosi’s recent statements as "incredibly dangerous" at a time when the nation is “on edge" and divided.

Pelosi warns 'the enemy is within the House of Representatives.' pic.twitter.com/huJT9zJlVl

"This kind of broad, inflammatory rhetoric is like throwing a match into the tinderbox," she said.

Appearing on Fox News' "The Ingraham Angle" on Friday night, Democrat Gabbard, who opted not to seek reelection to the House of Representatives when she ran for president in 2020, was responding to Pelosi’s recent words, addressed to reporters in connection with the Capitol riot on 6 January.

Dwelling on subsequent security measures to protect lawmakers, Pelosi said Congress will need to provide money "for more security for members, when the enemy is within the House of Representatives, a threat that members are concerned about".

"What Speaker Pelosi is talking about is a very serious thing. If there is evidence to back what she is saying ... is true, this is a legal issue for law enforcement," said Gabbard, who was the first Hindu member of Congress.

The US politician and United States Army Reserve officer said that while she was in the House, she had been targeted with repeated threats on her life by an individual, with law enforcement indicting and convicting the suspect.

"What Nancy Pelosi is talking about is a crime of terroristic threatening - and if true should be reported to law enforcement. Members of Congress are not above the law," added Gabbard.
© REUTERS / JOSHUA ROBERTS
U.S. House Speaker Nancy Pelosi (D-CA) attends her weekly news conference at the U.S. Capitol in in Washington, U.S., January 15, 2021

When asked by host Laura Ingraham if she believed that the House Speaker was adopting an intentionally inflammatory stance, Gabbard, who in March 2020 dropped out of the 2020 presidential race to endorsed Joe Biden, replied:

"If this is a [criminal threat], let law enforcement deal with it. If there is no evidence of what she is talking about, it is inciting further division and further harm potentially and further destroying the possibility of our country coming together."

The politician added that in her opinion Nancy Pelosi needed to apologise if her claims were baseless, “not so much to her colleagues but to the American people who… need leadership coming from the Speaker of the House, who represents all members of Congress and the American people to bring us together."

After several GOP representatives noted they were ‘armed and ready’ to protect themselves during the Capitol Hill riots on 6 January that had resulted in a disruption to the certification of Joe Biden’s win in the 2020 presidential election, House Speaker Nancy Pelosi has slammed the legislators for ostensibly bringing weapons into Congress.

Amid Republicans and Democrats clashing over whether lawmakers should be allowed to carry firearms in the Capitol building, so far lawmakers have preserved a 1967 rule that allows them to be armed for self-defence in the walls of Congress.

On 6 January, supporters of then-president Donald Trump stormed Capitol Hill in a bid to prevent Congress from certifying President Joe Biden's victory. The developments came in the wake of a rally where Trump reiterated that the election had been ‘stolen’ from him and rigged in favour of his Democratic rival Joe Biden.

The breaching of the Capitol resulted in five people dead and more than 170 cases opened by police in connection to the events. As a result, the US House of Representatives impeached Donald Trump a second time for ostensibly inciting the riot.