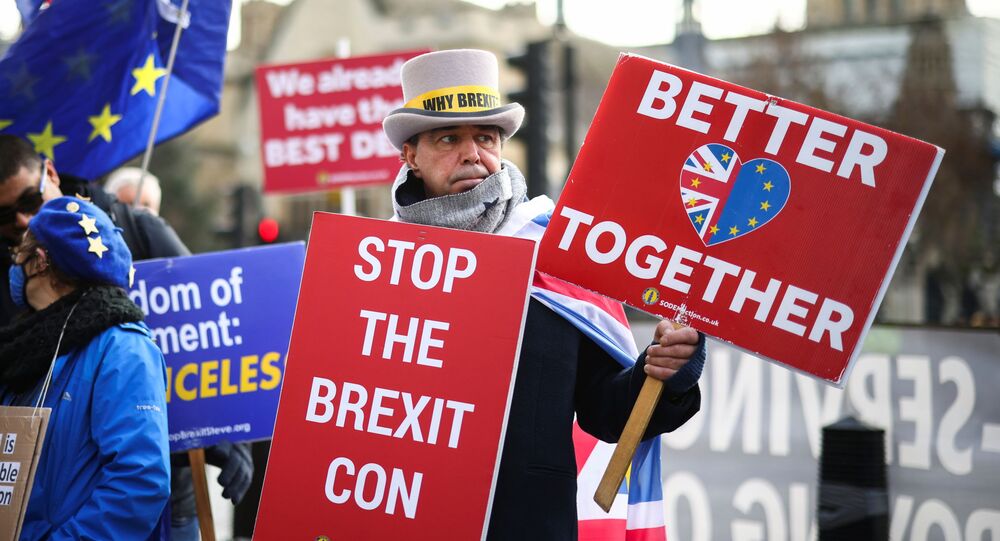 Brexit negotiations have continued through Sunday as the United Kingdom and the European Union are making a last-minute attempt to secure an agreement after the end of the transition period on 31 December.

Following a call with EU Commission President Ursula von der Leyen, British Prime Minister Boris Johnson said on Sunday that the UK was prepared for a no deal Brexit, arguing that there was "clarity" and "simplicity" in the move.

According to Johnson, a "no-deal" departure from the European Union at the end of the transition period was currently the most likely scenario, and the UK must "get ready" for it with "confidence".

After briefing his cabinet about the call with the EU official, Johnson told reporters that Britain should continue trying to secure a smooth departure from the EU with a deal "to be done" if UK partners were willing to do it.

"We're going to try with all our hearts and we'll be as creative as we possibly can," Johnson said outside of the Downing Street.

However, the prime minister noted that the UK and EU have remained "very far apart" on some central issues, "but where there is life, there's hope".

"We're going to keep talking to see what we can do, the UK certainly won't be walking away from the talks," Johnson said, while admitting that the officials have now passed the self-imposed deadline to finalise the negotiations.

The prime minister maintained that London still was not ready to compromise on "key red lines" but was eager to go "extra mile" in attempts to secure the EU-UK agreement.

"I've got to repeat the most likely thing now is of course that we have to get ready for WTO-terms, Australia terms," Johnson added.

Irish Foreign Minister Simon Coveney, however, said on Sunday that he believed a post-Brexit trade deal could still be done, although there are only few days left to secure it.

"There will be huge pressure this week on the negotiating teams to close this out and I would say a lot of impatience coming from Brussels and London," Coveney argued.

The United Kingdom officially left the EU in January, entering an 11-month negotiation period which is set to expire on 31 December. During the transition, the UK was expected to negotiate a trade deal with the bloc but an agreement has so far failed to materialise.

London and Brussels remain at odds over the EU's access to UK fishing grounds, post-Brexit governance, and a so-called “level playing field” issue, which is designed to ensure neither party gains an unfair advantage.

Boris Johnson wants post-Brexit Britain to be a strong independent country unhindered by EU legislation yet still able to benefit from zero-tariff access to European market.

Unsurprisingly, Brussels is not willing to give London an "unfair competitive advantage" following Brexit.

The two sides have set a Sunday deadline in the hope of walking away from negotiations with a deal. However, according to Johnson's comments, this has still not resulted in any major breakthrough.