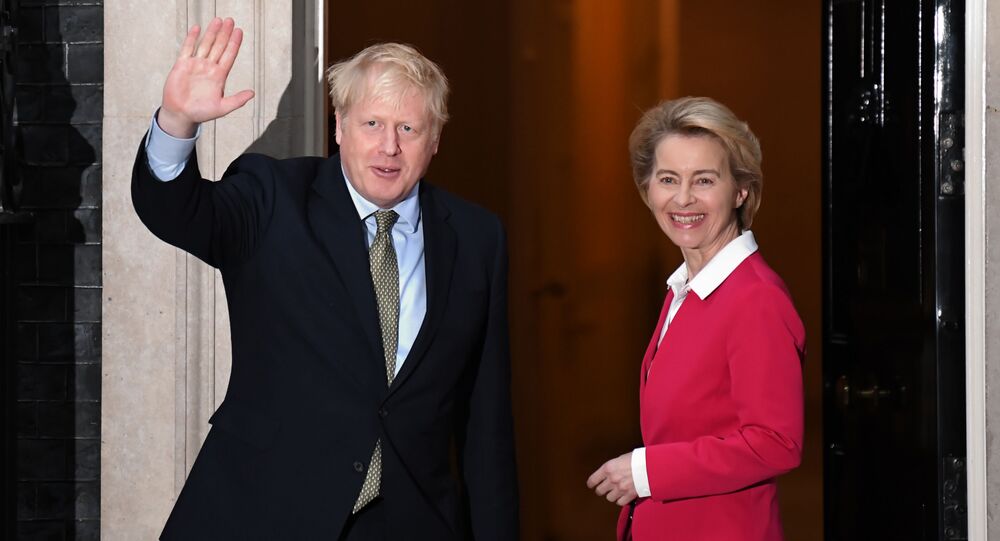 As Britain’s Brexit transition period is due to end on 31 December, EU and UK negotiators have been struggling to reach an accord on the three sticking points of governance, fishing rights, and the so-called level playing field, with both camps now conceding that a failure to reach a deal is now a more likely outcome than not.

Attempts have been ramped up to seek out a viable option to the no-deal scenario that would shift post-Brexit relations between the UK and EU to default terms.

The UK exited the bloc in January, entering the transition period, due to end on 31 December, and without a deal in place, default World Trade Organisation terms will take effect, bringing with them steep tariffs on some goods.

As stalled talks to reach a trade deal and ensure Britain’s orderly exit from the bloc continued into the night between the teams of Brussels’ chief negotiator, Michel Barnier, and his UK counterpart David Frost, hopes of averting a ‘no deal’ scenario were fast dwindling.

"Talks are continuing overnight, but as things stand, the offer on the table from the EU remains unacceptable. The prime minister will leave no stone unturned in this process, but he is absolutely clear: any agreement must be fair and respect the fundamental position that the UK will be a sovereign nation in three weeks' time,” a government source was quoted by Sky News as saying.

The scramble to hammer out a trade deal comes as government sources put the chance that the parties will fail to reach a last-minute breakthrough at 80 percent.

As Brussels has been demonstrating a particularly intransient stance, German Chancellor Angela Merkel has been suggested by one source as 'determined to make Britain crawl across broken glass' rather than broach a compromise, writes the Daily Mail.

UK negotiators are cited as saying the 'trust issue' between German Chancellor Angela Merkel and Boris Johnson played a part in the floundering talks last week. At the time, the UK side tried to break the deadlock by proposing a 'tariffs for freedom' arrangement.

However, say the sources, the fact that the 'Lutheran' Merkel does not trust the 'libertine' Johnson has brought the ‘no deal’ Brexit scenario even closer.

French President Emmanuel Macron has also been driving a hard bargain with the UK, as he struggles under domestic pressure to preserve access to UK waters for his country's fishing fleets, post-Brexit.

The EU earlier rejected Boris Johnson's request to negotiate directly with French President Emmanuel Macron and Germany's Angela Merkel about the unresolved issues, with Brussels’ officials reported as saying he was told discussions could only take place through the bloc's chief negotiator, Michel Barnier.

After an attempt by British negotiators to break the deadlock by proposing a 'tariffs for freedom' arrangement, when the UK would have been released from the need to follow EU rules in return for accepting that duties would be slapped on British exports to the bloc, a source close to the British negotiating team was cited as saying:

“…We thought this would be the moment. But they just weren't interested. They won't accept that Brexit means setting our own rules. We could set up all sorts of dispute recognition systems to make sure the new plan was fair, but the root of the problem seems to be Merkel herself: she doesn't trust Boris. They are very different people.”

The trade talks remain deadlocked over the principal hurdles, such as level of access to British fishing grounds given to EU vessels, the so-called level playing field, and governance.

On fishing, the EU has been pushing for maximum access for its boats, while the UK says it will prioritise its own boats after 1 January.

Without a deal on access to fishing waters, Brussels has warned London that it won't get full access to the EU market, without tariffs or taxes, to sell its fish there.

The so-called level playing field is about rules on fair competition to ensure businesses on one side don't have an unfair advantage over their competitors on the other.

Cutting regulations could render it cheaper to produce things, making some companies more competitive than others, which is why Brussels wants the UK to adhere particularly closely to EU rules on workers' rights, environmental regulations, and state aid (financial subsidies given by government to businesses).

Finally, there is the issue of resolving trade rows, pertaining to how the rules of the deal will be enforced in the future. The sides disagree on whether the European Court of Justice should settle future UK-EU trade disputes.
Earlier in the week, Boris Johnson and Ursula von der Leyen agreed on the Sunday deadline, following a meeting in Brussels on 9 December, after months of talks failed to achieve an agreement.

Johnson insisted the EU needed to make a "big change" over the main sticking points, while Ursula von der Leyen said a no deal was the looming outcome of "difficult" talks.

Speaking on Friday, the PM said a no-deal Brexit was now "very, very likely", as the European Commission president told reporters the two sides were still "apart on fundamental issues".

Earlier, Boris Johnson was slammed for what was perceived as "irresponsible" behaviour after Royal Navy gunboats were geared up to patrol UK waters to ward off any illegal fishing in the event of a no-deal Brexit on 1 January.

The UK Ministry of Defence had confirmed that four 80-metre armed vessels were on standby to guard British waters from European trawlers, reported Sky News, with reports suggesting that military helicopters would also be made available for the purpose next year.

There were also reports that UK cabinet ministers were mulling increasing authority for the navy to board vessels and arrest fishermen.

"While I hope for the best, I do fear for the worst because it is very, very difficult to see what the plan is, how we're going to do so brilliantly when we're out of this 'cage' of Europe - which we of course helped to build because the main constructor of the single market was Margaret Thatcher," Lord Patten told BBC Radio 4's Today programme.

Tobias Ellwood, Conservative chairman of the Commons Defence Committee, was cited by Sky News as saying:

"Here we are, these undignified reports suggesting that our overstretched navy is going to square up to our NATO ally over fishing vessel rights… Our adversaries must be laughing at us and we need to get back to the table, focus on what's important in these last 24-48 hours."

Other Tories have called for tougher action, with Shrewsbury MP Daniel Kawczynski tweeting on Friday that UK naval forces should be deployed "to prevent illegal French fishing in our waters".

​Former chief of naval staff, Admiral Lord West, agreed that measures should be set in place to prepare for a no-deal.

"There are complications in that you can push vessels aside, you can cut their fishing tackle but boarding these foreign ships, they'll need to pass probably a little thing through Parliament to give authority to board and get on them," West told Today.

In response to the reports, an Elysee official was cited by Reuters as saying the French side intended to "keep calm and carry on".

"I was just looking at a history book. The creation of the French Royal Navy was done in 1294 in response to naval battles between French and English fishermen. So this is a long, long history between our two nations.You're saying it's about fish but let's think just a few seconds. Do you really think it's only about fish that navy ships are used and will be used? I don't think so," he said on Times Radio.